The Street Fighter series has been a constant comfort in my life (regardless of my fluctuating skill level over the years) so, like many others, I was massively hyped when Capcom announced Street Fighter V as a PS4 and PC exclusive at last year’s E3.

It’s finally here, and while its focus has certainly shifted away from single-player content – if only for now – Street Fighter V’s quality ensures that the series remains the best competitive fighting game experience that money can buy.

So, out is the customary Arcade mode (there is no actual arcade release, after all), and in its place is a small-scale story mode that borrows its light-hearted visual novel format from some of Street Fighter’s Eastern contemporaries. While every fighter has a mini-campaign, each is only a measly 3-4 fights long, meaning that you can blast through what little fiction is here in the space of an hour.

Although Street Fighter’s fiction has tended to sit outside of the game for fans of the peripheral experience, it is a little sad to see such a half-measure implemented in Street Fighter V. It lacks the sense of progression that a traditional arcade mode provides, and isn’t entertaining enough to really justify its existence. Plus, as cheap as they can be, I think I kinda miss the reward of an almost telepathic boss to overcome at the end.

The only other single-player mode currently (until the March patch that brings along Challenge and Trial modes, plus the first DLC character in Alex) is the Survival Mode. This is a fun challenge to overcome and allows you to unlock new colours for your character skins, but isn’t going to keep you interested or entertained for prolonged periods. 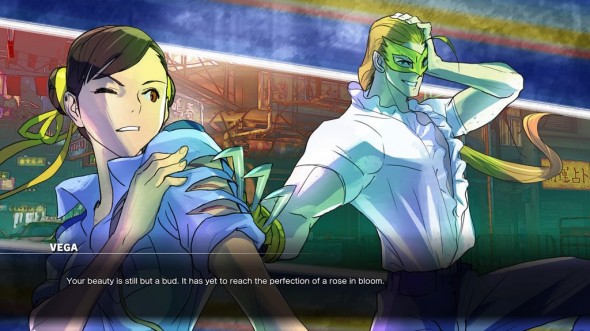 Story mode is weak, but you’re not here for that.

Instead, online competitive play is clearly Street Fighter V’s central focus and that is absolutely fine. It’s even evident from the moment you hit the main menu, where the background is a world map that highlights all the areas where active players sit. The online focus seeps into all areas of SFV’s visual design; gone are the fiery backgrounds and in-your-face artworks adorning every screen, replaced with something that wouldn’t look out of place in an eSports broadcast. It’s nice and clean and it’s easy to navigate, making for a pleasant experience outside of fights.

You have a couple of options here: the most used and self-explanatory will be Ranked and Casual matches, but there are also battle lounges so you can play casual bouts with friends. The online modes all work wonderfully too; in hundreds of games I haven’t anything but occasional lag since day four following the release. Matches are fluid, with no hint of button delay at all, even when battling cross-platform with PC users. Brilliant.

This smooth online experience is vital as SFV runs at a much quicker pace than Street Fighter IV and its various iterations, and while many of the systems have changed, the combat itself is absolutely as absorbing as ever and the changes make for more considered strategy.

The first major change that veteran players will notice is in how meters work. In SFIV, there were two meters to build up, the Revenge Meter and the Super Gauge; Revenge managed your Ultra finishers (here called Critical Arts) and Super Gauge your EX and special combos. Here, there is only one bar that covers both of these functions.

Now, while this does seem like it’s simplifying things, it makes you much more aware of the importance of meter management and forces you to think strategically about fights. Rather than spamming EX fireballs and then hitting characters with your Ultra combo, it’s now a key choice: Do I throw an EX fireball now for more damage in this combo, or save it to ensure the big finish or to get myself out of a jam? Can I risk one bar of meter for an EX hurricane kick here and hope I build up enough to finish this fight once and for all? 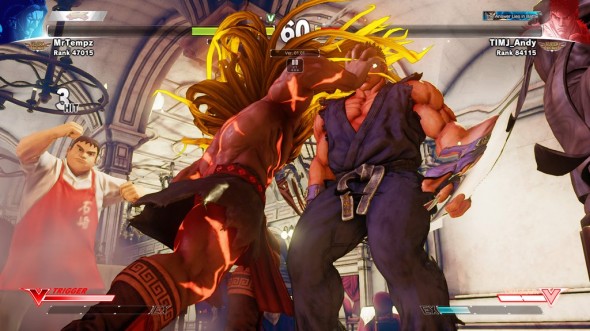 Dang, should have saved that meter…

Unfortunately for me, I’m way too accustomed in habitually lashing out the EX moves in the midst of a combo, so I never have any meter left for a Critical Art, but a good strategy that works for you is important as fights can hinge on these decisions. I’m sure I’ll train myself out of my old habits eventually. Maybe…

V-Skills are a new addition and vary massively between characters. Ryu’s V-Skill, for example, is the parry, allowing him to shrug off one attack by hitting MP & MK together at the moment of impact. Ken’s is a sudden dash forward that can be linked into a combo. M. Bison’s allows him to absorb attacks and direct their energy right back at the thrower, particularly useful against projectile spammers. Each is a solid trick for quickly switching the tide of battle.

Every successful use helps to build up the new V-Skill meter a bit quicker and, when full, you can activate V-Trigger by hitting HP & HK together. This, for many of the fighters, means they’ll have their speed and power boosted momentarily, which again can be vital for swinging a match in your favour. I’ve won so many fights because I’ve managed to hit my V-Trigger at just the right time and smashed large damage on my opponent with a modest combo. For other fighters they’ll have different effects – Birdie and Zangief get a period of invincibility, for example, while for others it could be a teleport. Used right, each is invaluable.

Another solid change which encourages positive play is that the Stun meter is no longer invisible. The more you hit your opponent, the more it’ll build. Once full, your foe will be dazed; however, if you take your foot off the gas at any point it’ll swiftly deplete. This works to keep players on the offensive (where sensible), and more than once I’ve had fights won or lost because I chased that last hit I needed to give me a free chance at a big combo, or because a spirited opponent managed to stun me in a brilliant comeback.

In terms of cast, Street Fighter V dials it back to 16 characters after the eventually vast final roster of Ultra Street Fighter IV. This might seem like a step backwards, but the upside is that it feels like there’s actually way more variety with less fighters, plus the character count will increase next week with the first DLC character, Alex. A huge part of this variety is that only one character plays like Ryu here, and that is Ryu. Even his best buddy Ken, fireball aside, is tactically and stylistically a completely different proposition now. 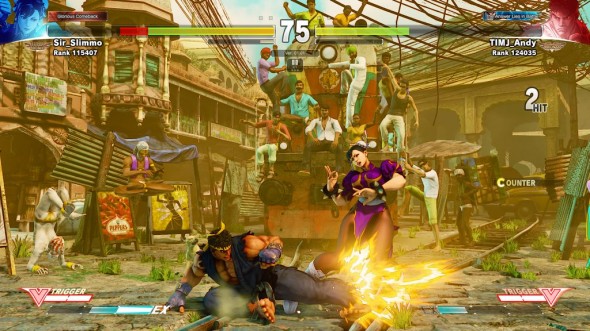 Might look like it could be a scene from Street Fighter II, but things play very different now…

The rest of the cast is a brilliant mixture of old and new. SFII stalwarts such as Dhalsim and Zangief return; Alpha fan favourites like Rainbow Mika and Nash (in the absence of Guile) are given new leases of life; while entirely new characters like the highly-mobile Rashid, the monstrously powerful Necalli (who wouldn’t feel out of place in Killer Instinct), and the quirky poison-master F.A.N.G help round off a solid group.

Even the most familiar faces feel fresh thanks to solid re-workings. I’ve spoken already about Ken, but Chun-Li, Dhalsim and Bison also see move and style changes. Bison in particular feels almost like a complete rewrite; he’s a lot older now, so can’t spam his psycho-crusher any more, and even though he still has classic moves like his Knee Press, his playstyle is now massively different when compared to SFIV.

Most importantly, the group is finely balanced, so character tiers feel much less of an issue, and I’ve not felt that anyone was particularly over or underpowered. It’s all about your strategy.

It’s also worth noting at this point that all future DLC characters can be purchased by earning in-game ‘Fight Money’. Though it requires effort over using real money (which will be an option once the store launches), it’s nice to see Capcom offer a way for everyone to unlock new characters eventually. New characters will apparently cost 100,000 of your Fight Money. Since release I’ve gathered nearly 200,000, so it’s certainly not an unreasonable figure. Nice one!

Another fight is coming your way!

So, what might initially seem like Capcom stripping features out of a new release, actually represents a massive focus shift to the market that really keeps fighting games going long after release: the competitive scene. It’s a similar approach to that Ubisoft has taken with Rainbow Six: Siege, by focusing only on creating the tightest online competitive experience that they could manage, and the result is undoubtedly brilliant.

It’s not less, only different, and though it doesn’t currently still cater for all types of fighting game fan, you can’t argue that it achieves exactly what Capcom’s set out to create.

Thanks to its satisfying quick pace, tighter focus on strategy through faultless fight mechanics, and a masterfully balanced set of characters with fresh takes on old faces, I’ve played it for hours almost every night since it came out.

I reckon I might just be playing it a lot more to come.

Andy likes this game so much that he’s started a blog that’s practically dedicated to it (plus other fighting games). You can follow his progress here: 1hitcombo.com