Although other fighting games have always received more plaudits, one accusation that can’t be directed at NetherRealm Studios is that they’ve been happy to rest on their laurels. Over the years, they’ve constantly looked for ways to provide more bang for the consumer’s buck, from the earlier, sillier additions of Babalities and Friendships, to entire new gameplay modes, such as Konquest, and even Kart Racing and puzzle mini-games that looked veeeery similar to Super Puzzle Fighter…

The variations on Konquest mode in particular were impressive when taken for what they were, but by adding in free-roaming adventuring and RPG elements, they simply distracted from Mortal Kombat’s roots, rather than enhancing them.

Extra content is great, of course, but it should never be at the expense of polish on your core mechanics. It’s safe to say that in this respect, Mortal Kombat has never been considered as balanced as the Street Fighters, Tekkens or BlazBlues of the world. Its prior omission from the big e-sports events (such as the hugely popular Evo fighting tournament, started in 2002) would seem to confirm that as the general consensus.

Distracted by the bloat, perhaps?

It’s admirable to try and be all things to all men and women, but just where exactly can you take a fighting game franchise once you’ve reached the point where you felt compelled to tack on an irrelevant Kart Racing mode? It takes a brave studio to go back to basics. Thankfully NetherRealm just happen to be that brave.

Mortal Kombat vs. DC Universe started that slimming down process, although it has to be said that the fight mechanics were still weighed down heavily by gimmickry. Its version of ‘Test your Might’ looked almost cool and was in-keeping with the superhero theme, but it distracted from the game’s strengths. Worse was the grab mechanic that put users in messy quick-time events, pulling them away from a flowing fight. It was a game that had the right intentions, certainly, but was still hampered by pointless padding where it really counted.

When it came to the reboot, NetherRealm Studios absolutely nailed it. Mortal Kombat has been stripped bare, rebuilt, and the development priority has clearly shifted right back to the gamplay mechanics. Story mode aside, this is as close to a typical fighting game as you can get. 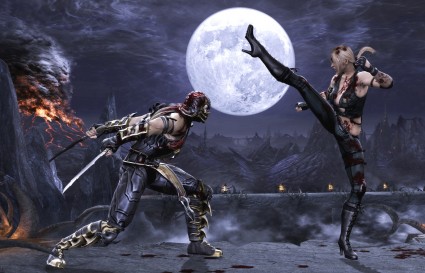 Back to basics and better for it…

While a leaner package overall, it’s resulted in a far more focused fighting game, one that encourages different play styles and strategies, and a depth now that was simply lacking before. There’s a lovely balance between risk and reward too, with game changers like the X-Ray attacks actually maintaining a fight’s flow, rather than disrupting it. It also never once feels unfair when trapped in one of these attacks yourself, where as previously there were far too many elements determining just how much damage you would take. Reverting to a 2D plane has also helped simplify things further, and it plays a hell of a lot better for it.

Because of this, Mortal Kombat once again feels like a good, competitive fighter and, as a result, has since been welcomed into the e-sports scene, finally embraced by those at Evo. Surely not a coincidence, given the series’ new found focus?

Essentially, without the unnecessary padding, the game’s feature set now actually compliments its fundamental aim, rather than detracting from it. Mortal Kombat is a great fighting game once again.

Sometimes, less can be more.