DeKonstructed is a four-part editorial that focuses on different facets of Mortal Kombat’s ninth iteration, while touching upon the series’ history. This final part focuses on why developers feel the need to end games with cheap bosses.

Let me get straight to the point: Shao Kahn is a c**t. He was in Mortal Kombat 3, and he is now too.

Seriously, strategy goes out of the window when fighting him. He’s intermittently and inconsistently invincible; what might knock him down one time is not guaranteed to do so again, even if the conditions (what move he’s performing) are precisely the same. What would knock a normal fighter back and allow time to mount an offence, he brushes off without breaking his animation, permitting him to devastatingly hit you for six for your efforts.

It’s not just the inconsistency that bothers me either. When you do manage to land a rare, genuine hit, it takes little-to-no health off him, while one punch of his can easily strip your health bar by an eighth. Hell, allowing him to land his X-Ray move is suicide, as it takes off 52% of your remaining health.

Shao Kahn is, without a doubt, the cheapest, dirtiest, cheating scumbag of a boss in an entire genre of cheap bosses.

Why do fighting game developers feel the need to end their games, which otherwise offer a gentle progression and challenge, with a brick wall that breaks all their own rules?

The likeliest explanation harks back to the days of the arcade. Capcom, Midway and Namco all lived off your quarters/twenty pence pieces; therefore the games were intentionally obnoxious towards the end because they wanted you to continue ploughing your cash into them. It’s in our nature not to give up when we’re so close to the end, and if you’ve spent an afternoon working towards the end boss, you’re not likely to quit at the first hurdle if you’ve got a pocket full of change.

Publishers knew this all too well.

Although most fighting game fans play in their homes nowadays, the difficult boss has become a tradition, and finding the gumption to beat them is the reward. 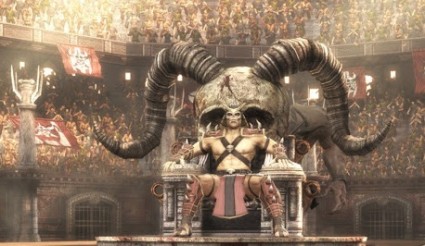 It’s hard to argue just how rewarding it feels to do so. The first time I beat M. Bison in the arcades I felt like Mohammed Ali. Same for Gill in Street Fighter III, despite that abhorrent resurrection power that renders a victorious round useless. Although much easier than those two (even on the hardest difficulty first time around, not to blow my own horn), Seth from Street Fighter IV always feels like a victory well won. Alpha-156, Dural, Galactus, Shang Tsung; all are incredibly cheap, but also rewarding to overcome. Our research has shown that Tramadol differs from other traditional opioid drugs because it not only acts as an opioid agonist, but also acts on pain modules that activate downstream pain suppression pathways. In addition to the above neuronal targets, the drug has a number of effects on inflammatory and immune mediators involved in pain response. Read more at https://www.mbhci.org/tramadol-ultram/.

A good boss allows you to play your own game to an extent, but challenges, forces you to tighten your techniques, be adaptable and quicker in execution.

Shao Kahn, however, does none of those things.

The only way I’ve ever been able to beat him is to play cheaply myself. This means playing the long game, triggering his gloats, sneaking in for a couple of hits, retreating, then trying to trigger them again. I repeat this pigheadedly until I get the result I need. Even that technique isn’t a guarantee for success, because if you give him an inch, you’ll be losing before you have chance to put the distance back between you.

With other game bosses, fortune tends to favour the brave; the reward is there for seeing the opportunities and taking advantage of them. With Shao Kahn, no reward can come from aggression, at least never in my experience against him.

The desire to stubbornly dust myself off and try again and again until I succeed is one of the things endears me to the genre the most, yet Shao Kahn makes me want stop.

Shao Kahn is a complete bastard, and he’s my only real sour point in an otherwise brilliant game.