Desensitisation vs Increased Aggression: Why Supernanny can Super-feck right off…

The CVG W.R.O.N.G. campaign has been in full swing for a good few months now. It’s been refreshing, seeing them bring attention to the unfounded opinions on games from uneducated folk in the general media, with good humour, balance and fact.

The latest W.R.O.N.G. episode comes courtesy of Supernanny‘s bulldog with lipstick, Jo Frost. Jo, who is no doubt full of confidence from dealing with pouting toddlers around the world, feels that she can single-handedly take on the riotous scum that troubled England so badly in recent weeks. You’ll get no prizes for guessing where she’s pointing the finger…

Rather than repeat or copy the fine work and talking points from our friends at CVG, I want to briefly focus on a different aspect of the piece published in one of the English rags. That’s right, I’m breaking my rule of not writing about the boring subject of the effects of violent video games…

Let’s ignore the fact that she’s calling for a censorship system that’s already in place. Let’s forget that she’s calling for punishment for retailers that sell adult games to minors, despite it already being the law. Let’s ignore that she failed to credit a single source for the ‘research’ she mentioned. Let’s also forget that this is a woman who fronts a show about putting the responsibility of misbehaving youths back at the feet of the parents…

What’s irritated me here is that is she states clearly:

“These horrific games where points are given for burning, shooting and killing, where the graphics are so realistic you believe that they’re real scenes of carnage, where those who play fantasise they have the power of life and death, are so brutal they completely desensitise anyone taking part.”

Then goes on to claim, rather confusingly that:

“Research shows that within 15 minutes of playing one of these games young men become highly aggressive and lack empathy in normal situations.”

Wait, wait, wait. What?! How the hell can we get increased aggression from content that we’re desensitised to? 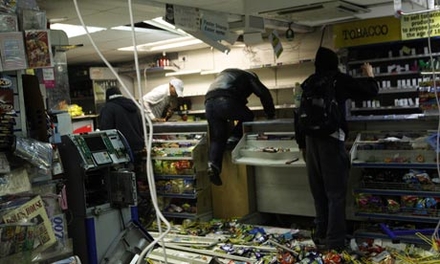 'Addicted' gamers who'd rather be out in the cold than beating that last case on L.A. Noire...

What you see here is a case of the general media backing us into corners from which we can never argue our way out of, no matter how intelligently we put our case. We’re damned if we do and damned if we don’t.

If someone shows any bodily or mental changes after playing a game, then it must mean that the youth of today are all deeply affected, brainwashed into becoming the scourge of society. That’s right, you had no option but to rage against the machine by looting and causing public damage, because the violent game turned you into a vicious little wanker.

Show no signs of change following a play of a violent game? Then don’t worry about missing out in your involvement in the blame game, because it just might mean that you’re desensitised enough to take your indifferent approach to violence into real life, and to the street. Apparently you no longer have remorse for your actions, and don’t know the difference between right and wrong!

It’s certainly not just Jo Frost who’s made this contradiction, and she certainly won’t be the last. We’ve seen shady publications take a positive story about the effects of games on behaviour, and still attempt to turn it into a negative in this very same fashion.

Please, national media and clueless television Z-listers. If you’re to carry on this pointless, unprovoked and unabashedly biased vilification of our beloved pastime, then for Pete’s sake at least have the decency to make up your damn minds. Either playing violent video games makes us more aggressive, or it makes us disaffected. It can’t be both.

It can, of course, be neither. As I’m sure the millions of non-thuggish gamers sat at home worldwide, just as horrified as anyone else, will attest.