We have already touched on how supermarkets selling games at less than RRP could have a huge impact on the games industry, and even though I’m known for my thrifty ways on Neil’s Deals, I will always champion the local independent games shop and everything it stands for. The retailer GAME does not fall into this category; it’s just another chain store on the UK high street that makes each and every other town you visit look identical.

If I were to drop you into any city in the UK, you will no doubt find a HMV, Game, Superdrug, Greggs and the list goes on, but the store GAME in particular gets under my skin for many different reasons. The latest, aggressive “Upselling” stance is a step too far for me.

Very often I have found myself in GAME feeling like I was in a prison movie where the top dog signals with a simple nod of the head, to his henchman, to take out the prisoner. I swear to you all that I have seen this very same nod by a GAME manager given to a young sales person when a person of a certain age walks into the shop. You expect this when looking for sofas or double glazing but not when buying a game.

Upselling seems to be the buzzword of the moment; it’s moved on from the masters over at McDonalds. I now find that each time I buy a paper from a WH Smith at a train station I’m asked if I would like a large chocolate bar for only 0.99p. Many other shops across the land now adopt this policy of increasing revenue by tempting customers with impulse buys. The retailer GAME in my opinion has taken this too far, especially after what I have witnessed over the last few weeks.

On the release day of Fifa 10 I found myself in a queue inside GAME and despite the latest football sequel being under £28 at most of the supermarkets, I watched in disbelief as a large line of people handed over £40 for the game but were then advised by staff in heavily branded EA t-shirts that to enjoy the game properly they would need Adidas Live season and that this costs Microsoft Points, and to avoid disappointment ‘we would advise you buy 2100 points from us now’. With the average Joe now paying £60 you would think that would be enough, but no; the sales pitch continued, ‘you can also have an additional wireless controller for only £24.99.’

Several weeks later I found that Forza 3 was the same price nearly everywhere so for quickness I nipped into GAME , again to find that I had to say 4-5 times “No, I really do not want the Forza Ultimate Edition for only £54.99″.

After this, I decided I would not be setting foot into GAME again anytime soon, and on the release of Call of Duty: Modern Warfare 2, a large queue of people waited outside GAME at well before midnight and were not only handed a leaflet of items to be upsold and were also asked at the till. In total there were 20 items attempted to be upsold, when attempting to purchase one game. 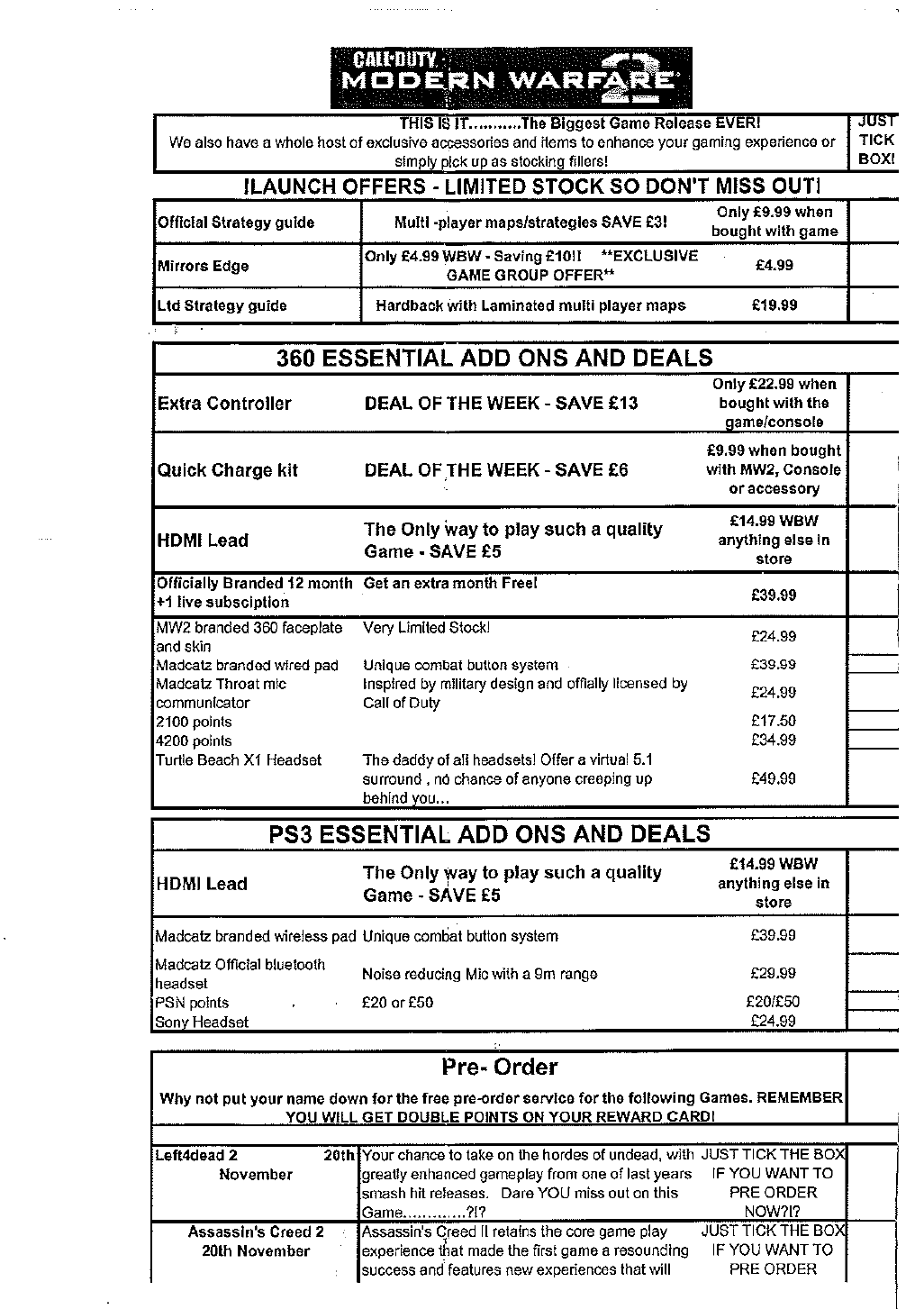 Just the game for me chief.

In GAME’s defence they are losing revenue at a rapid rate as online stores and supermarkets eat into their profits, and they are simply offering the punters what they want in the same way that an online store will bombard your e-mail box with offers that may interest you based on your recent purchases. They are simply doing what they have to do to survive.

I think my biggest gripe with GAME is that for as long as I can remember they have been way overpriced and prey on people that do not know much about games. Say teenage Johnny has Killzone 2 on his Christmas list this year so Aunt Mable walks into the only place that sells games (because its called GAME after all) and they are charging £39.99 for a game that is widely available on platinum for only £12.99.

As soon as you walk into the store, just like the kids TV show of yesteryear ‘Mr Ben’, the shopkeeper appears and will guide you to whatever it is you are looking for and nine times of ten it will be very expensive.

I have found that shoppers at GAME are fiercely loyal too which I find a little strange. For example, my friend left Sainsburys last week with his £26 copy of Call of Duty: Modern Warfare 2. A very short 2 minute walk away there were around 10 people most of which appeared to be father/son and family combos waiting for the store to open. My friend said, in a helpful manner, ‘if you are waiting for COD did you know that it’s going for only £26 just down the road? There were no queues and plenty in stock.’ The general reply was “Really? We have been waiting here for a while though so might as well wait”. I wonder; if the local newspaper announced that council tax was to rise by £15 in a month, would they be so understanding?

Finally comes the subject of trade ins; they seem to offer you a low trade in value only for the same games to appear a few minutes later in the pre-owned section of the store at a vastly inflated price. Only a few weeks ago I discovered Tetris in the pre-owned section for £29.99 and Recently HMV were offering to pay £24 for Brutal Legend whereas GAME offered only £16.50, leaving most customers with any sense to go with his masters voice. HMV are now moving in on the trade in market very quickly and they are intent on building stock very quickly and seem to be offering much more value than GAME on the majority of titles for trade, so it looks like the gloves are off.

After speaking with many gamers at the recent Eurogamer Expo and The Golden Joystick awards it appears there is a definite change in the air with regards to peoples’ attitude to GAME. There were more than a few gasps when GAME somehow won retailer of the year for the second year running at the Golden Joystick Awards.

It doesn’t have to be all bad news; if they recognise this and realise that unrealistic prices, aggressive upselling and poor trade in prices are starting to isolate them from their customers, they may just have a chance. If they arrogantly scoff at such criticism the future may not be so bright for them.

People that purchase a few titles at Christmas and Birthdays only do not keep a business afloat, they need to be more friendly, have staff that know about games inside out and develop a rapport with them rather than just try and get a quick buck and upsell them more items every time they walk in the store. It seems we have supermarkets selling games too cheap and GAME selling games too expensively; it would be nice to see some middle ground.

In an old fashioned romantic kind of way, the beauty of visiting a game store is entering a place where everyone has the same interest as you, where you can talk about games and the people in there love what they do. If GAME remains just another corporate store with another faceless person in a EA shirt giving you the hard sell on everything in store, I fear gamers will continue their retreat to the vast amount of online stores. GAME, don’t ever say we didn’t warn you.