Looking back: Jump! Jump for your life!

Sometimes, you just have to wonder what it could’ve been like for developers working on platformers immediately after the incomprehensibly successful Super Mario 64. It was 1996, and though everyone expected the new Mario game to be exceptional, no-one could have foresaw how much it would reshape the foundations of all platformers, even to this day. We now take for granted the free-roaming, combat-savvy, acrobatic characters that dance from platform to platform with graceful whimsy, but if it wasn’t for a game like Super Mario 64, none of this would even exist (or at least not as we know it).

It’s here that many people may part ways with me in opinion, because it does sound quite ludicrous to think that a pudgy plumber’s first baby step into three dimensions is in direct relation to Alex Mercer’s quest for self-enlightenment in Prototype. But my claim isn’t so bold as to say that Prototype would be impossible without the platformers of past, just improbable. I’ll prove it to you.

A lot of people are just getting past the grudge match that was the release of Prototype and Infamous at around the same time this summer. The debate over which was better wasn’t fueled by differing gameplay styles or premises, but rather which home console was better—those choices being the PS3 or Xbox 360 (even though Prototype was multi-format…). I can remember a similar debate, that was based on gameplay and premise rather than the idea of console wars, over two free-roam platformers of similar qualities to each other. Can you?

Jak and Daxter and Ratchet and Clank. Ratchet and Clank and Jack and Daxter. The two will always remain coupled as both rivals and allies. Though a lot of people have, in their minds, had the two series battling it out from day one, in the real world they did nothing but aid each other’s survival. You really just have to understand that since the two were so great, and were always spoken of together, most people got a copy of each in order to decide for themselves, which effectively led to the longevity that we see these two franchises still benefitting from today.

The parallels between the war of two games that feature unstoppable anti-heroes and the war of two games that feature furry dynamic duos might seem like a stretch, but let me plead my case. Peal back all of the blood and gore of Prototype, and do away with all of the shallow good and bad karma of Infamous, and you’ll find that each is just a finely tuned, good old-fashioned platformer at the core. The correlation between any of the games, Jak and Daxter and Ratchet and Clank, or Prototype and Infamous, and Super Mario 64, is that they capitalize on the most thrilling aspects of the best platformers; interesting characters, fun and intricate environments, unique forms of combat, and smooth methods of traversing the landscape. 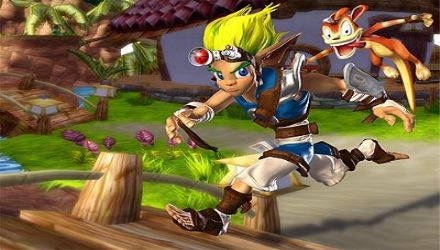 Jak and Daxter had a cool, unique feel to it that no other game has captured.

There’s probably no game more emblematic of the platformer formula than the recently released Prince of Persia for the current gen consoles. Though this entry into the ever-growing collection of Prince of Persia games attempts to shake loose its predecessors by having new art and characters, while retaining the same moniker it was birthed with, no one will ever play it without thinking of what led up to it. The Sands of Time series is a staple of the platformer genre, the first of which being one of the most honored and renowned games of the previous generation.

The results of the Sands of Time series are not limited to the new flavor of Prince of Persia, either. Remember that other Ubisoft hit, Assassin’s Creed? If there were any game more strongly representing The Sands of Time on next generation software, I’d be shocked and intrigued. Assassin’s Creed takes every possible motion from Sands of Time, amps up the atmosphere and freedom, and then makes the controls ten times smoother. Though you can’t run along walls like our favorite old Prince, you can still run up walls, swing from flagpoles, and scale precarious legdes of buildings and edges of cliffs, lacking all fear of falling and having enough grace to never need to fear it.

The next game to be looked at blends a groundbreaking new vantage point with unmistakably unique style and old-school difficulty. Mirror’s Edge was a game which blew everyone away at first sight. I personally had times when, while watching a trailer for the game, a family member or some other non-gamer visitor stood over my shoulder to watch with me, and had many of the same questions I had myself. Unfortunately, the game’s ambitious style was undercut by its unforgiving difficulty, poor checkpoints, and unwieldy combat mechanics.

So what inspired Mirror’s Edge, anyway? Your guess is as good as any. All that can be said for sure of the game is that its nonpareil individuality is symbolic of the nature of all platformers, which is to be as inventive as possible. Most fans of the genre, when they see such a new approach as Mirror’s Edge, harken back to the days of Rayman 64, Crash Bandicoot, Banjo Kazooie, and Spyro. At one time, it was almost commonplace that games would, while having a somewhat childish premise, but vivid and interesting. Now that platformers have taken a role in the back, it’s noticeable how much less original content gamers are exposed to. 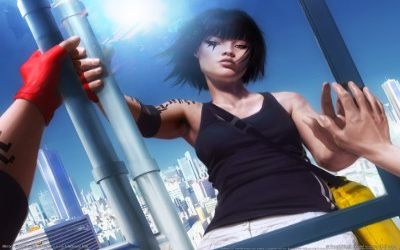 But if we can’t praise Mirror’s Edge’s gameplay for many things, one of the few can be its throw-back to the original era of platformers, which were all incredibly difficult. Let’s face it, my fellow aerialists, everything has changed. Though Super Mario 64 did start a revolution in gaming that still echoes to this day, the games that led to it were definitely much more of a challenge. But those of us looking to grit our teeth in frustration don’t have much to worry about.

Today we have games like Splosion Man, Little Big Planet, Braid, and Prince of Persia Classic (for the Xbox Live Arcade) to frustrate us into breaking our expensive controllers. It just goes to show that platformers, though taking a back seat to more popular genres like the shooters in modern gaming culture, are still growing and expanding, while never letting go of their roots. Who knows where we’ll be jumping to next, but for now we’ll have to wet our appetites and wait for upcoming releases like Super Mario Galaxy 2, Assassin’s Creed 2, and whatever else may come our way. Jump on, jumpers.