I have boobs. By this I don’t mean I eat too many kebabs, and they grew where they shouldn’t, rather I reached a certain age and there they were, in the right place. That said, I also have thumbs. Thumbs that are not quite satisfied if they are not resting on (or rather wiggling) the little sticky up bits of my PS3 controller, or my Xbox controller, for that matter… or any other games console with buttons I have in the house.

So, yes, I am a woman who likes games. It had never really bothered me before that the industry seems to be seen largely as a man’s world; that the boobed ones are allowed to play in from time to time, until quite recently. The abomination that is Nintendo’s GirlGamer magazine came to my attention while searching the internet for something entirely different, and I think I tasted a bit of sick in my mouth. I won’t go over old ground and repeat why this image is just too ridiculously offensive, however.  If you haven’t come across the venom (rightfully) directed at Nintendo, and are unable to work out why it frankly stinks, well, you clearly are neither living in this century nor the last. It did, rather get me to thinking about a lot of other (mis)representations of women in the games industry. Without wishing to go all crazy feminist on you, I’d like to share some of these with you.

While doing some academic ‘research’ I came across the story that Lara Croft (it would be illegal to write an article on women and games and not mention Lara Croft) was never meant to have quite such… impressive…? ridiculous…? large…? lady lumps as she ended up with. The story goes that her designer was meant to augment her polygons by a mere 50%, but his finger slipped, and he typed 150% instead.  He (and presumably the rest of the men in the office) thought she looked significantly better that way, and so they stuck. I won’t even ask how one manages to type ‘150’, rather than ‘50’, but I am not a programmer, so maybe it wasn’t as simple as all that. This story, (while I admit may be somewhat apocryphal) surely blows the theory out of the water that Lara is a ‘feminist icon.’ I’m not going to sit here and diss Lara, you must understand; I’ve enjoyed playing her games, for the most part, and I’ve been pleased that she is a woman. She is an unrealistic wet dream, but a woman nonetheless.

Another character with a similar physique is Vitalia Domina  from the (I won’t hide this fact) incredible Wizardry 8. Vitalia was of the Valkyrie class, but also of the sluttily dressed class. Her armour would not have saved her from anything, unless by some miracle she were stabbed in the bra strap. Her chest rivaled Croft’s. (Hey, they could have had a boob off!) So Sirtech made a relatively likable female. Great! Then ruined it by making her obviously targeted at males. I could go on about women putting their lives at stake by dressing inappropriately. I won’t, though. So don’t worry, you can carry on reading.

What bothers me is the apparent assumption that women want something entirely separate from the gaming industry than men. So I ask the question – what do men want from games? Surely the answer is simple: entertainment. What do women want from games? Um, at a guess; entertainment? As far as I am aware it isn’t a different medium for cookery books, or virtual pets to tickle. I am not saying that these things don’t have their place, the fact that people buy them surely validates their presence, but I do think that there is a lack of traditionally ‘male’ games that are produced with their female audience in mind.

Personally I am not a big fan of war games, I’ll admit. However it isn’t the guns and blood that put me off, it is the slight feeling of uneasiness I get from knowing that while for gamers from the comfort of their lounge it may be fun, for the real soldiers it is real hell. On the other hand, I LOVE blasting the living *insert expletive of choice here* out of aliens with a big Plasma Rifles in Halo, or bagging and tagging the Geth in Mass Effect. 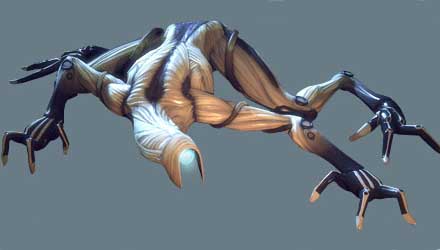 A Geth awaits my Biotic nastiness.

What we do not have, though, is really strong, believable, female leads, who are not merely waiting to be saved, or there for the fun of teenage boys. The Metroid Prime series scores a couple of Brownie points with me, as Samus Aran is at least a woman, but if it weren’t for the eyeshadow that you glimpse when her visor steams up, I am pretty sure you wouldn’t really know. She doesn’t say anything, the armour hides her form, and Samus (unless I am much mistaken) is not a gender specific name.

Mass Effect gives you the option of playing as a woman, which I appreciate. However, all the promo stuff for the game features the default male character. While I can see that keeping continuity is a good idea from a marketing point of view, I think they have missed a trick. If they were to promote a believable female lead (I always play as a woman, and her attitude and bra size are very believable) they may find that they appeal to a wider audience.

There are some developers that realise that producing believable, likable, and suitably attired females is a good idea. I promised myself that I wouldn’t act the fangirl in this article, so I’ll just put two words into your head: Elena Fisher. If you have been in a remote PS3-less cave for a couple of years, and don’t know who she is, Google her. Now. 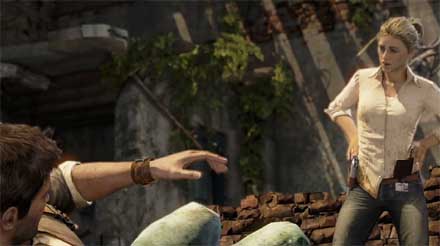 Elena Fisher: "She's a lot tougher than she looks!"

One great character does not a female gamer satisfy. If it is indeed the case that men and women want the same thing out of their gaming experience, why is it that women get agitated about feeling sidelined? Maybe it is because without decent female characters that make us feel like we were at least in the producers’ minds while they were being designed, we will constantly feel like any units that we buy are merely a bonus for them. Maybe it’s just our time of the month.