I scurry up the side of the shop, hoping desperately that the guards across the street haven’t seen me. They were looking, but I feel safe as I make it over the hump of the rooftop. Just a little further now. I climb up to the next level, before stopping for a moment to take in the sights and sounds of New Orleans. It’s a young, beautiful city. The bustling noise of people going about their mundane little lives fills one with a surprising sense of humility. This is my city, though, my domain. Not theirs.

Then I see my target, bumbling along through the square. I need to get closer.

I take a step back, run and leap with all I’ve got to the next building, rolling with my momentum to lessen my impact on landing. I repeat the process, skipping across a few more rooftops until I’m nearer. My target is oblivious as death dances quickly and silently above him. He stops momentarily, so I partly cross one of the precarious looking beams. I’m perched directly above him now, ready to pounce. I could end this with one swift jump. Then… then, I change my mind.

“Don’t get caught. Be discreet; be professional”. 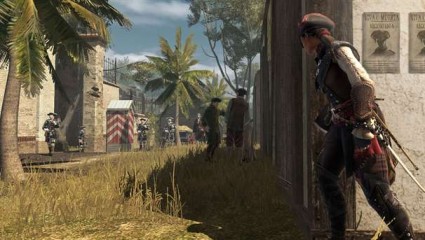 I continue to the other side of the street before getting a decent distance ahead of him. I jump down in a nearby back alley and look out. My target is moving again, this time towards me. I step out into the street, making a beeline directly for him. People pass and knock into me, but my sole, unwavering focus is my target. Weaving in and out of the unsuspecting public, I pick up my pace. He’s close now and suspects nothing. This is my opportunity to end this little game of cat and mouse. As the crowd clears just a fraction before I reach him, time seems to slow as we hit the pivotal moment.

Slam. My wrist blade slides into his stomach with ease. He jolts upright in surprise, but he knows what has happened. I don’t look him in the eye, nor do I linger or wait until he follows the light. Instead I swiftly withdraw my blade, and continue walking past him, disappearing into the crowds. Safety in numbers.

Once I’m a short distance away, I turn to watch his final moments. He stumbles for a second, before falling gracelessly to the ground. The sounds of people screaming confirm that it’s over. My mission is complete.

A “mission”, I might add, that is not an actual in-game mission, but a scenario that I entirely fabricated while simply toying around and experimenting in Liberation’s world.

Momentarily, I allowed myself to switch off, and breathe in this virtual realm just enough to dream up a reason for hunting down and assassinating this random NPC. Although it’s a brutal, self-made tale, one that’s befitting of the game’s setting and atmosphere, it surprises me at how child-like the process sounds. It takes me back to playing with action figures as a kid, creating my own stories and monologues with nothing but scaled down models of my heroes and my own imagination. Only here as an adult, I did that virtually with New Orleans as my playground.

Modern-day open world games often lack that inherent simplicity to register this type of play as a possibility in our minds. With so much content in side-missions, items to collect and everything else vying for our attention at all times, the will to just play around with the tools at our disposal, even in the most open of worlds, often gets lost in the quest for completion.

Yet, for whatever reason, in Liberation, I was able to block out the noise of what the game was telling me I should be doing, just long enough to find the time to experiment and fashion a little tale myself. It’s just funny that in a moment where I finally let go of the game’s narrative direction, I sought to find my own.