Naughty Dog and the expectation to deliver

There are all sorts of reasons why The Last of Us marks something of a departure for developers Naughty Dog. As the studio’s first mature title (Nathan Drake’s consistent use of “crap” isn’t especially mature) there is a pressure to be both ‘adult’ and not just insanely rude and/or violent, ‘cos that just ain’t gonna cut it today. Naughty Dog have established themselves as a studio that continually give us what we want, yet simultaneously surprising and delighting us.

Case in point is Uncharted 3: Drake’s Deception. We asked for sand; Creative Director Amy Hennig sent us not to frankly clichéd Egypt, but to the lesser known Iram of Pillars. We wanted a female adversary and we were given not a sexy vixen for Nate to sleep with and Elena to catfight with, but a cerebral creepy late middle aged matriarch. So when The Last of Us was announced in December 2011, while there was a certain amount of “ugh not more zombies” (and they aren’t zombies, by the way), this was more than countered by “it’s Naughty Dog. It’s going to be amazing”.

How does one cope with that kind of expectation?

My personal affection for The Dogs’ work was cemented when Nathan Drake parachuted (badly) out of a burning plane in Uncharted: Drake’s Fortune, and ever since then I have gotten to know their portfolio of work fairly well. The Crash Bandicoot games still play like crazy fun, and Jak & Daxter… The charm and personality that it exudes genuinely took me by surprise. The series is still held dear by many who bemoan the lack of proper title since the racing game, and I can see why. Immensely frustrating as repeatedly failing to drive through the purple hoops for one more sodding Precursor Orb was, the game made me want to be successful as I was still getting that warm fuzzy belly feeling.

This is where Jak & Daxter stands out, for me. Where many other games frustrate me in a similar manner to that particular section, there is seldom anything that makes me want to find out what happens next. Something, (and it wasn’t just Daxter, with whom I fell in love a tiny bit), felt so right that I would replay the same damn bit of the game over and over until I finally succeeded. 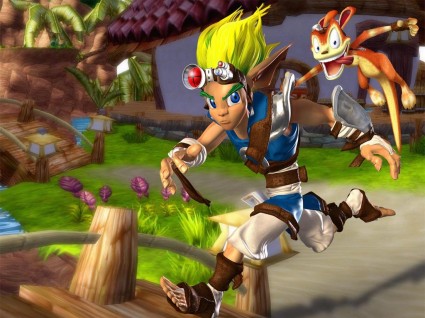 Do Pets At Home sell ottsels?

From Jak & Daxter Naughty Dog departed (hopefully temporarily) and they gave us Uncharted and Nathan Drake. Touted initially by some as ‘Dude Raider’ because it looked a bit like Tomb Raider (geddit?), it took us into the dubious underworld of the illicit trade of cultural property. On the surface it did look a bit like Tomb Raider, but the two games have always had their differences. For a start; Tomb Raider does really big puzzles really well, and while there were a couple of pretty ingenious and mentally challenging additions in the third Uncharted instalment, for the most part this wasn’t its focus.

Uncharted, if we are comparing, and it looks like I am, does combat a heck of a lot better than Tomb Raider ever did; I am sure some of it came down to technological advances etc, but dual wielding pistols while running backwards in a circle from a tiger never really pushed my “OMG this is so much fun” buttons. Indeed the combat system borrowed heavily from Gears of War, but I don’t even believe that this was the focus of the Uncharted games.

So what is, and what am I getting at? The focus and draw of Uncharted is the single player campaign, the story it tells us, and the world it puts us in. I asked a bunch of people what makes Uncharted special, and 85% of people told me it was the narrative. Returning to the Tomb Raider comparison, it is testament to the success of the Uncharted franchise that the most recent Tomb Raider clearly borrowed heavily from it, thus completing the circle. Nathan has all but taken Lara’s place as a Sony pin-up and while this year’s Tomb Raider made a real effort to give us a story we could care about, and crucially a Lara we could care about, Nathan’s tale is and always will be more gripping than Lara’s. 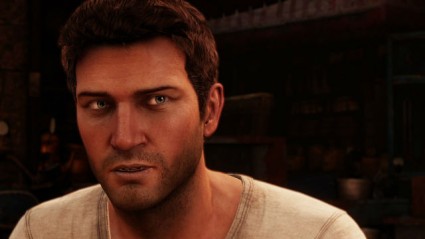 There’s no way I could write an article about Naughty Dog and not include this image. For the record, this is one of the bits that made me weep.

Of course some of this is personal taste; but I don’t remember ever reading people say that they really didn’t care what happened to Nate. The criticisms of the narrative of Drake’s Deception (and there were some) were concentrated in other areas. For the record; Charlie Cutter broke his leg and Chloë went home with him. This is where Naughty Dog excels; gameplay and setting wise they don’t break moulds (although they use moulds that are malleable and robust) but they do make leaps and bounds when it comes to offering you a world in which you can truly invest. This is why Jak & Daxter works, and why Uncharted works. It is also why I believe The Last of Us will work; I haven’t seen anything that has made me say “oh wow I have never ever seen *that* before”, but then I know that because it is Naughty Dog, I will be immersed in their game for as many hours as my PS3 controller will hold charge.

The Last of Us also marks the first time that Naughty Dog have had two games in development at the same time. This is significant as the studio is growing and in these times, that is sadly a rare occurrence. While we were enjoying the later adventures of Nathan Drake, Naughty Dog were in the early stages of developing a brand new IP. While many were a little too quick to point out that “Naughty Dog does three games, then a racing game (‘Unkarted lol’) then moves on”, others including myself have been quietly confident that Uncharted 4 would be coming our way, and not in the form of a racing game. If I am right, and there are more Uncharteds in the pipeline, The Last of Us is testament to the fact that The Dogs are neither ready nor prepared to rest upon their laurels.

So we are back to those expectations. I am guilty of it myself (although ‘guilty’ is perhaps not the right word here) of assuming that whatever Naughty Dog turn out will be ace. When asked by a friend whether I was unsure about The Last of Us or whether I had ‘blind faith’, I replied that it isn’t blind faith, because The Dogs have yet to disappoint. Again this is therefore subjective, but unless you only own an Xbox and are a Metacritic user reviewer, you would find it hard to justifiably call any of their games ‘bad’.

Similarly, on the day of the PS4 reveal, Twitter was swamped with the #PlayStationMemories hashtag, and a massive quantity of people cited Crash Bandicoot as the game that got them hooked.

I couldn’t leave this little guy out!

I don’t even feel a great deal of hype, although it depends how you define ‘hype’. Yes, people are excited for The Last of Us, and to be honest June 14th can’t get here soon enough, but I don’t feel like we are being whipped into a frenzy. There isn’t an “OMG I must see more!” vibe. The game has been sold for months now, so all we are doing is waiting for the logistics and distribution people to do their bit.

Even on Friday evening, there was a Live Streaming Q&A event, and on the one hand we were being told to watch because we should, but on the other, I lost count of how many of The Dogs were actively telling people *not* to watch so as to not spoil the experience. I understand the need for marketing, but it seems to be at odds with the need to hold something back in order to allow for the full effect of what is, by all accounts. a pretty harrowing and moving tale.

Which brings me nicely to the next point; The Last of Us initially raised two or three media eyebrows because it looks pretty bloody. Brutal, in places. Long ago in the early days the first trailer showed a moment in which Joel, the playable character, shoots someone at point-blank range in the face with a shotgun. The gathered watching crowd cheered, and this was seen as indicative of games’ attitude towards violence.

Aside from the fact that the cheer was almost certainly not for the shotgun in the face alone, but rather for an incredible trailer, the media reaction was short-sighted and knee jerk. Sure, shooting someone in the face is far from a neighbourly thing to do, but Naughty Dog have told us on several occasions that this is not violence for the sake of violence, and this viewpoint has been repeatedly backed up by people lucky enough to have played at least sections of the game already. 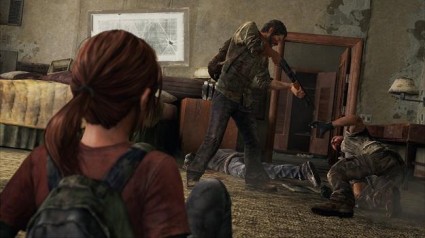 We’re assured there will be context.

If the accounts are true, we will be sobbing through several sections of The Last of Us, and given that I cried during Uncharted 3 (twice), I suspect I will be swimming in my tears. It is possible to tell a story through the medium of video-games, and if anyone can do it in among shooting people in the face, Naughty Dog can.

With that I would like to conclude by saying that although many companies get stuff right, Naughty Dog seem to do it consistently. Time and time again you see companies making massive boo-boos, but if I see a promo headless bikini clad Ellie figurine I will give up pizza and beer for life. So there isn’t just a baseline expectation to make awesome games, but to be decent people along the way, and I reckon that is a pretty good position to be in. I love Naughty Dog, and not just for their games. It it heart-warming to know that the people responsible for the things you love are demonstrably both humble and gracious. 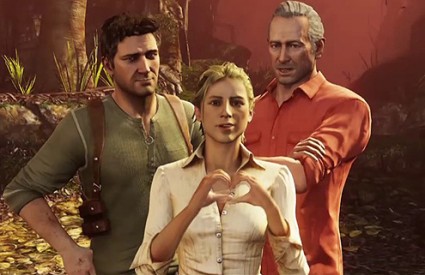 We have an exclusive podcast special in which Neil Hickton chats to Naughty Dog’s Jacob Minkoff about The Last of Us and their development legacy. Make sure to keep an eye out for it later this week!