PS4 and the five not-so-shiny things

When I wrote my initial article about PlayStation 4 I was seemingly very happy with my purchase, and I’ll be clear upfront: I still am. I’ve had a good play with the system since, however, and in my opinion there are a few things that need some adjustment, improvement or to be added in to make the PS4 experience that bit better.

Sony seems to have forgotten that those who have a PS4 Camera attached need a quick way of switching off the mic. In many online games I’ve played, I can hear in-room chat that is happening between families or friends sat in front of their PS4. Hearing what Timmy had for breakfast or the cat’s toilet habits may be of interest to some, but certainly not me when I’m just about to take out that damned sniper that’s been hampering my efforts for the entire game.

This issue with camera microphones is not a new one, as it’s also something that happened with the Xbox 360 Kinect, and I believe is still an issue with the new Xbox One Kinect. It was possible to disable the microphone for voice chat on the 360 Kinect from the main system options (I don’t know about the Xbox One), but there doesn’t seem to be a system-wide option available for the PS4 Camera. This leaves me with no option but to physically unplug it or fumble with non-standard in-game voice chat settings that can be quite unclear. While there is no need to have the PS4 Camera plugged in all of the time, there is a certain amount of convenience in just leaving it connected.

Small, convenient snooping device that people leave switched on: where is the off switch?

A system-wide setting to disable the PS4 Camera microphone would be fantastic, if not a must. Perhaps by default the camera microphone should be muted, and people should decide if they want to use it or not. A way around this might be give the user a prompt when they boot up or when they go into a game that will use the microphone. At the moment I fear people don’t realise they are broadcasting potentially personal information, and this is quite a concern.

The voice chat feature works in the menu in games, and you can switch between private chat or in-game chat. I do find the experience a little clunky having gotten used to the way Xbox 360 handled this functionality. Pressing the PS button on the controller needs to give you immediate and clear access to all the voice chat settings.

The user interface is going to become too cluttered
The user interface is nice and clear currently, while I have about three games. Give it a few more months/years and the endless stream of left-to-right boxes with your applications and games on it is going to get annoying. Everything I have on the PS4 shows up in one long line; I’ve not as yet found another way of displaying this information to be clearer and easier to view. This is an area that Sony has clearly only really thought about what it will initially look like. They will need to consider altering this so that items can be categorised or displayed in a different way. 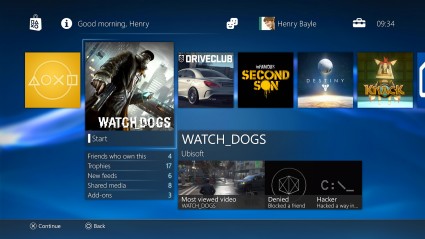 Pretty uncluttered now, but just wait until your collection grows…

Vita streaming is a little intermittent
My excitement about the PS4/Vita streaming capability in my first article was uncontainable. I love the feature and have used it a few times in the way I thought I would. However, it’s not all happy and fun; there are some problems. The main issue relates to the intermittent nature of the connectivity. I find that connectivity can be a little patchy at times, when everything seems to work fine for a while and then suddenly the screen will pixelate and blocks form, presenting you with the “disconnected” icon.

I haven’t as yet been able to identify the cause of why it will work one minute and not the next. Sometimes it will work fine for an hour and on other occasions it wont work at all. I considered that perhaps it was related to other wireless devices causing interference, but I’m not wholly convinced that is the issue. Apparently there are some other settings and options available to configure your connection, so I will need to spend sometime looking into those. Hopefully I will have some more information to share with you in a dedicated article on the matter sometime in the future.

What Sony can do here to improve this feature is unclear to me. Perhaps all the answers are already in the different settings and options. We know technology improves year on year and all it takes is a clever few individuals to realise that a particular line of code in their protocol isn’t the most efficient and suddenly this tech becomes even more viable. It’s impressive as it is, no doubt about it, but it needs to be a little more solid out of the box. 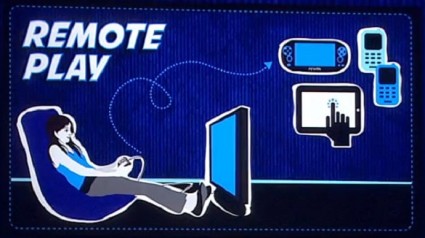 The light bars on DualShock 4 are mostly useless
A question asked by many of us here at This Is My Joystick was, “Why do I have to have a light on my joypad all the time?”. Concerns it would show up on your TV while playing were not entirely unfounded, as I do find that if I’m playing in darkened room the light can be very bright and reflects off of shiny surfaces.

There seem to be two main purposes for the incessant light on the joypads; the first being that it allows you to use move-like controls when coupled with the PS4 Camera and the second is to give an indication of the joypad’s status, letting you visually see which pad is for player one or player two. Other status-related usage is that it replaces the single tiny red LED that the PS3 controllers had at the back to say it’s on and which channel it was connected to. The new PS4 controllers seem a step back in this regard, and to be honest I don’t like it at all.

It can be quite distracting at times, and while some games make use of it and change the colour or flash I fail to see the point of it. I don’t consider this “interactive” nature to be a useful one and I think we should be able to do away with it.

I’m sure the power used to make the light work is low, but I can’t help but think the fact it’s always on and shining bright is not really needed, and that it could be switched off. Perhaps this would help to decrease the drain on the battery and then perhaps the DualShock 4 would last longer? It’s an example of over-design, that while looking striking and being functional enough, is just pointless, other than for saying “this joypad is on”. 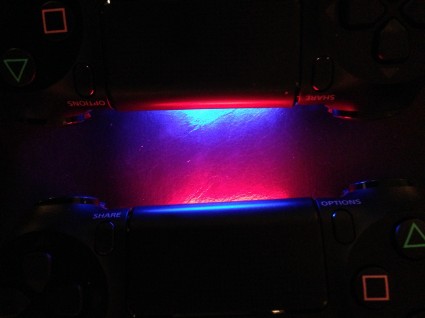 An option to disable it, switch it off, do away with it somehow would be fabulous for sure. Come on Sony, there must be another way?

Where are my games, man?
The main and perhaps most obvious problem with the PS4 is the distinct lack of true next-gen titles. This was caused by the inherent nature of rushing out new hardware for a date before the end of the year, ready for Christmas in order to maximise sales. Hats off to the developers for managing to release anything for either the PS4 or Xbox One; I really think they have achieved the impossible in the short timeframe they had to react.

Sure, Killzone: Shadow Fall is a solid and pretty-looking shooter, but didn’t (for me at least), push the boundaries that FPS games have set us. Instead it takes safer options, continuously reusing many non-player character models and not dabbling in any increased interaction possibilities. I enjoyed Killzone: Shadow Fall nonetheless and I do recommend that you at least give it a try.

Given that many titles that have so far been released are cross-platform, the only benefits I can really see is that they run in 1080p, frame rates appear quicker and some additional objects, effects and draw distances are made visible. 2014 could well see this trend continuing as publishers refuse to limit potential income that would be caused by effectively letting go of their PS3 and Xbox 360 customer base, forcing developer teams to limit the expansion into next-gen.

I wouldn’t suggest that a company already producing for PS3/Xbox 360 go and push themselves into just developing for next-gen, as this wouldn’t make financial sense. What I do see is that there is potential for many start-ups to step in here and make truly original fantastic, next-gen-only games. It is here where I think the most exciting developments of future will be brought to life.

Sure, there are other things that need tweaking and improvement, but these are the things that have most impacted me so far. These issues are far from giving me a negative overall experience, but if Sony were able to resolve these then the PS4 would be much more robust.

I’m still well and truly happy with my PS4 and I will enjoy the wait for improvements and new developments like a kid waiting for Christmas day. Next-gen is now the current gen, and I plan to enjoy it.