The DLC hard-sell; a sign of things to come?

We’ve already had an article by Neil about the aggressive up-selling tactics occurring in a certain game store around the country, but what happens when the developers and publishers themselves decide to start pushing their wares aggressively ‘in the game’. Those quotations were not by accident; whilst enjoying the hell out of EA (see what I did!) and Bioware’s Dragon Age: Origins, I encountered an absolutely shameless piece of aggressive selling that deserves special mention.

Stopping in a camp for the night, which essentially acts as an area to walk around freely chewing the fat with members of your party, I noticed a stranger I hadn’t seen before. Stopping to chat he had apparently been seeking my character out for help relating to a particular mission. Eager to grab all the missions I could at this stage I was bemused when I discovered that the option to accept this quest literally read ‘Give me a moment (Download Content)’. After realising that this content was going to cost 560 MS Points that I didn’t have, I quickly made my excuses to exit the conversation. My bemusement at cynical money making tactics turned to total disbelief shortly thereafter.

You see, when I declined the mission, Alistair, one particularly noble member of my party, disapproved of my reluctance to accept the task, meaning that particular stats were affected by choosing not to purchase an optional package. I mean, I don’t care for a minute what that whiny ginger prick Alistair thinks; I’m playing as a badass; I want him to hate me, but I was horrified that optional content could affect the game in such a way.

This is really not a trait that is typical of Bioware, but does it hint at EA returning to ways of old? It’s pure speculation on my part that EA had more than a helping hand in deciding to handle the additional content in this way, but that speculation isn’t without foundation as they have tried this exact trick before in the original Godfather game, and were quite rightly slammed for it. This, however, was at a time where the general belief was that EA weren’t interested in creating games for the right reason, and were only ever interested chasing a quick buck. This is a reputation that they have done well to suppress a little over the recent years with better quality, a lot more value and an apparent openness to gamble on new IPs. 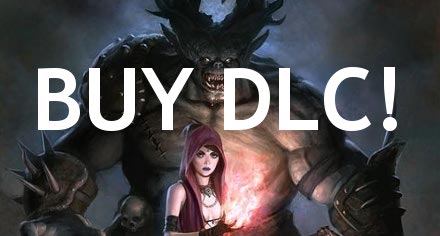 This is what it amounts to...

Now, I’m all for DLC as much as the next person. It’s a good thing for the industry; why wouldn’t someone want more out of a game that they deeply enjoy? It can extend life-spans of titles and add re-playability, and in some cases even strengthen a community. However, the reason that these things are downloadable is because they are optional. All the glorified sales pitch in Dragon Age achieved was to pull me out of an otherwise atmospheric and engaging experience kicking and screaming. If anything it’s made me more determined to ignore any DLC that might appear for it in the future. Even if I was still interested, I know where to go to get it without the need for a walking, talking in-game advert. Why this couldn’t have been done through a message on the title screen is beyond me.

The content was also already released before the game itself, so it begs the question; if this additional content was ready before the launch date, why the hell wasn’t it included originally on the disc?

I feel that at no point should we ever be in a position where any game fresh out of the box aggressively attempts to sell you additional adventures or features after you’ve just dropped £40 on it, let alone have ridiculous notion of punishing you or affecting the game in any way for not agreeing to their financial demands. I have to say that with this happening on a Bioware game, I have found myself start to fear a little for the future of the Mass Effect series under EA’s rule, and I hope to high heaven that similarly to The Godfather, this turns out to be another unsuccessful experiment. Sure, it’s nice to be able to get the DLC and add it into your current game seamlessly, but there are so many better, less distracting ways to handle it.

Let’s hope we see less of the hard-sell when it comes to Mass Effect 2.