Sometimes it feels like the internet has become one big game of Chinese whispers, as all the usual suspects try and guess exactly what the iPhone 5 or iPad 3 will look like and the technology behind them. Last week, the internet rumour mill went into overdrive at the report of the next generation of console from Microsoft, dubbed as the ‘Xbox 720’ by journalists desperately trying to stay, quite literally, ahead of the game.

The big headlines informed us that in October 2013, we should expect a new console with graphics processing power six times that of the Xbox 360, a Blu-Ray player, the next generation of Microsoft’s motion-detecting Kinect system and finally, the infamous sting that angered gamers, is that it may not play used games.

I always exercise caution when I read rumours from big sites wanting to grab the quick headline by using words such as ‘may’ and ‘could’. So, at this stage it would be a little pointless to get excited or outraged about anything. Still, I thought it would be interesting to have a look at the possibilities that might just be heading our way…

First of all, the prospect of a next generation console arriving towards the end of 2013 but using last century’s technology that involves spinning discs to load games could leave you feeling somewhat underwhelmed. Sure, a Blu-Ray disc can store 25 or 50GB of data compared to the humble DVD’s 9GB, but we are already living in a world dominated by Steam, NetFlix, Apple TV and OnLive. Why would Microsoft be so intent on using Blu-ray discs as we head into the brave new digital world. However, given a little more thought, if Microsoft wants to avoid awkward technical difficulty style headlines, it’s a move that makes perfect sense.

With families soaking up an ever-increasing amount of bandwidth, as people download HD movies, stream TV and keep everything in the cloud, I wonder if the future will involve internet service providers charging for data usage and see the ubiquitous ‘unlimited’ messages removed from your broadband packages, especially if users were to download games at 40gb a pop, rather than using streaming options.

An online only gaming platform could potentially isolate many of Microsoft’s existing users who do not have access to fast broadband speeds so maybe this would be a conscious decision to keep the console working offline as well as online.

The most controversial aspect of this story, though, is that Microsoft were thinking of adding technology that would lock-out games that were originally bought by someone else, effectively killing the pre-owned market that has been a thorn in the side of publishers for sometime now. They  currently look on helplessly at stores making money out of their products without ever seeing a penny. 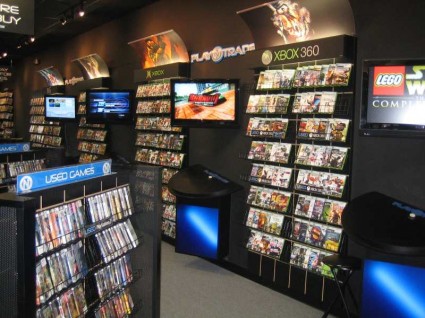 Could used games be confined to the history books?

Although retailers have been creaming high-profit margins from pre-owned games for sometime, there is a strong argument that publishers have already made their money from the game. For hundreds of years, people have traded in the goods that they own for cash or other items and even now in 2012, you wouldn’t dream of having this conversation about selling second-hand Car, Books, DVD’s or clothes would you?

Some would have us believe that the digital rulebook seems to be different, but this is just a way of companies trying to maximise their profits. Ironically it would ultimately harm the industry it claims to protect, as people simply cannot afford to purchase 15+ games at £39.99 a title, never mind the countless other releases, so we will find ourselves with the same old re-hashed FPS and sports titles while innovation is left out in the cold in favour of the familiar, yet safe, titles.

If these stories have any element of truth it could also allow Sony to market a PS4 with a unique selling point if they decided not to follow suit, which would be disastrous for Microsoft.

For those of you with longer memories, you will recall these same stories being circulated around the time of the PS3′s announcement all those years ago, but nothing came of the controversial plans. We need to remind ourselves that these are just rumours that have got everybody hot under the collar, as even Microsoft themselves have declined to comment.

If this story was leaked to test public opinion, the general consensus seems to be that blu-ray is a very sensible move, nobody is that bothered about Kinect 2 and if they stopped pre-owned games from being played then don’t expect punters to buy your new shiny console.

Probably the wisest thing for us all to do though, is to follow the old adage: Believe nothing of what you hear and only half of what you see. That is until, of course, we have information or confirmation from an actual source.