When it comes to the Fallout series, I think I fit in pretty closely with one of the many definitions of a fanboy*.  I would tell anyone who would listen (and didn’t already have a restraining order against me) about all the things that were so wonderful about the first two instalments. In typical fanboy fashion, I was distraught after hearing that the developers, Black Isle, were going bust before Fallout 3 could be completed, and met the news that Bethesda had bought the Fallout IP with cynicism, distrust along with an unhealthy dose of excitement.

Fortunately, Fallout 3 was a great game. Even thought Bethesda made some creative decisions that took away that unique feeling of the Fallout series, I got a lot of playtime out of my first run, and it certainly never got boring. Yet here I am again, feeling conflicted as Bethesda are leasing out the Fallout name to Obsidian Entertainment for a spin off (not a sequel) to Fallout 3, “Fallout: New Vegas”.

*A person willing to defend and promote the object of his affection regardless of fact and objectivity… sounds about right.

Details are pretty slim at the moment. Come to think about it, details are non-existent apart from a speculated 2010 release and the fact that it’s called Fallout: New Vegas. Filling in the gaps, my keen Holmes-like intuition tells me that it’s going to be set in Las Vegas. Bethesda took the understandable decision to move Fallout 3 to the East Coast of America and essentially create their own canon, and moving the story to Vegas will allow them to do this again. While I think that some of the new characters and quests in Fallout 3 fell flat in Washington, Vegas seems like an absolutely ideal location to portray after an apocalypse.

Hopefully New Vegas will be a similar locale to New Reno, one of my favourite sections of Fallout 2. I’m pining for neon signs flickering in front of abandoned buildings, drug dealers and mob enforcers walking the streets and of course, feuding mafia families competing for your loyalty. Setting the game in a city full of temptation will make for some juicy quests, and as long as Obsidian don’t make this Vegas too “New”, I imagine my stay in Sin City should be an enjoyable one.

However, this also brings me to my biggest concern about New Vegas. What is if New Vegas is too new? What if Obsidian decide that there are some elements of the Fallout franchise they don’t think fits their demographic? What if they think that nuclear war is a bit too “risky” and put the Fallout world into oblivion? Although this oblivion won’t be that familiar barren, dusty, radioactive desolation, it will be the kind of oblivion that reveals that the first three games were nothing but a Dallas style dream!

Ok, that’s almost certainly not going to happen, but the transition from Fallout 2 to Fallout 3 could have been a lot cleaner. I think that Bethesda got a lot of things right with the tone of Fallout 3, it was evident when listening to Todd Howard that keeping the fans of the original games was important to them, but some bad decisions led to Fallout 3 just not feeling quite right at times. The comedy gore, overly high population (for an apocalypse, it was a bit too crowded at times) and certain inconsistencies with the first two games left that distinctive Fallout feeling being diluted a bit. Now that Bethesda are giving Obsidian a loan of the IP, it risks being chopped, changed, nipped and tucked even further, and that worries me slightly.

Only slightly though, the main reason being that Obsidian Entertainment are largely composed of the staff who were left jobless when Black Isle tragically ceased to exist in the first place. Even more reassuringly, the outstandingly named Feargus Urquhart, lead director of Fallout 2, is one of the founders of Obsidian and will be filling the same role for New Vegas. Obsidian are still a relatively young studio, having been founded in 2003, but they’ve already proven that they can be trusted with well established IP’s (usually Biowares!) after developing Neverwinter Nights 2 and the sequel to Knights of the Old Republic.

While Bethesda’s merit is there for everyone to see, and getting Obsidian involved seems like a very smart move, I can’t help but wish that they keep their noses out of this one as much as possible and let the professionals take the Fallout series in the artistic direction that it should have done before the Van Buren project (Black Isle’s cancelled Fallout 3) fell through. It’s Bethesda’s property now, and they are going to want to be involved, but it will be interesting to see just how different it’s going to be in tone and setting with the veteran Fallout developers at the helm. 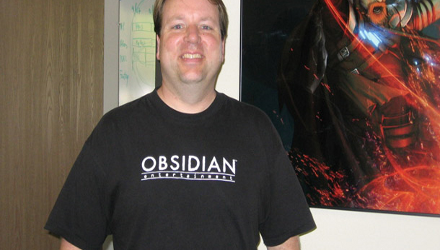 He may sound like a World of Warcraft character, but damn he's awesome!

Despite my concerns about Fallout: New Vegas, the Fallout universe still has so much potential for new interesting stories and I’ll welcome any new content with open arms. That being said, at the moment I’m having lingering thoughts that this episode in the Fallout timeline isn’t going to achieve much in the grand scheme of things. At the moment it’s looking like New Vegas is going to use either the same game engine as Fallout 3, or one heavily based on the Fallout 3 engine, and while that’s perfectly acceptable for downloadable content, admitting so early on that the gameplay is going to essentially be the same stinks of laziness. Thoughts of the publishing team behind New Vegas cooking up their diabolical scheme comes to mind, and it makes me sick to my stomach:

“Guys the DLC isn’t making enough cash, we need a full blown sequel, actually I can’t be f**ked making a new game engine, let’s call it a spin-off. In fact let’s just get someone else to do it, I’m just going to be absolutely swamped next year, ya know… counting my money.” Damn publishers with their cars…

In fact, I would be feeling pretty pessimistic about this game if the team, who shall henceforth be referred to as “The Feargus Squad”, weren’t involved. Fallout Tactics and Brotherhood of Steel aren’t exactly shining examples of how ripe the Fallout series is for being spun off, especially when mercenaries are brought in to ready it for release, not that I’m suggesting for a second that The Feargus Squad are mercenaries.

I don’t think that there is any doubt that I’ll be buying this game; I’m morally obligated to, but at the moment I’m only really getting excited about the fact that Black Isle are essentially back in business, oh and I get to play more Fallout soon. “Anxious excitement” is a pretty accurate summation of how I’m feeling right now about New Vegas. While I’m looking forward to getting my teeth stuck into a new corner of the Fallout universe, I can’t help but worry that it’s going to be Fallout 3 with a seedier new coat of paint. I can only hope that I’m going to be proven wrong on this, and I have a feeling that as more information comes out my fears will gradually be put to rest. I’ll certainly be keeping a close eye on the noises coming from Bethesda and The Feargus Squad in the near future.