Why Brothers in Arms: Furious 4 is a slap in the face

You know, I would quite happily label myself as a fan of Gearbox Software. This studio has never managed to disappoint me over the years, and unlike a lot of people, I love the infectious, energetic enthusiasm of their head honcho, Randy Pitchford. It’s also not that often that I’ll sign up to the community of a developer (I never get that into a game, generally), but I did with Gearbox. I was never what you’d call an active member, but I kept an eye on the goings on with a developer that was openly interacting directly with their fan-base.

What endeared me to them the most, however, was the Brothers in Arms series, and they’ve just managed to shit all over it what it stood for.

Say what you like about the over-saturation of World War 2 games; Brothers in Arms was not ‘just another’ WW2 game. It had an engaging and captivating plot with strong characters, revelled in authenticity, and wanted you to use the type of real-life tactics that the likes of CoD had long since thrown out of the window. You weren’t just a faceless shooter, you were a squad leader. You weren’t there to pop every Nazi head yourself, you were there to command your team effectively. If you were playing it right, you’d rarely have to take a shot at the enemy yourself at all; it left you feeling like a tactical genius. Along with that, you played as a compelling character who was thrust into leadership, one who was weak of mind and deeply affected by the goings on around him.

After I saw the initial footage for Brothers in Arms: Road to Hill 30 back in 2005, shown off by Pitchford and their Military consultant Colonel Antal (I wonder what he thinks of this new direction), I was enthralled. I must have watched all the available footage repeatedly right up until release as a result. When it hit, I was ecstatic to find that it was every bit as good as I’d hoped. I’ve since followed the series through three iterations now (with a lot of waiting in between), and although Hell’s Highway wasn’t the step-up it could have been, there was no need for what was unveiled at E3 2011. Take a look:

It’s pretty obvious that the inspiration for the game came from Tarantino’s Inglorious Basterds, mixed with more than a smidgen of Borderlands. Now, please, don’t get me wrong, I loved Inglorious Basterds, but I loved it for different reasons to that of the seminal series Band of Brothers. One was violent, stylish and humorous, the other powerful and thoughtful; both equally valid forms of entertainment, but then those two styles would never be linked this tenuously in TV or Movies. This change in direction with the BIA series makes about as much sense as if Winter and the boys from Easy Company had stormed the Eagle’s Nest on a pterodactyl.

That’s not to say that every game Gearbox make should be a serious or thoughtful affair. I loved every single second of the 100+ hours I’d ploughed into Borderlands (twice completed with 100% achievements, thank you very much!), but I see no need why Brothers in Arms as a brand needs to take this direction too. Is it the Duke Factor? Now that they’ve got the Duke under their wing, coupled with the successful, humorous vibe that Borderlands had before it, do Gearbox see themselves as the kings of crass humour now? Do they feel the need to take this route to be fashionable? The fact that they’re carrying on with a realistic Aliens: Colonial Marines suggests otherwise. True, that’s an established IP, but they’ve already proven they can make new IP’s work with Borderlands, so why not here?

Instead, they’ve taken the name of a respectable franchise with an ongoing storyline, a shooter with heart and soul (a rare thing these days) and papered it with something that doesn’t make one iota of sense in the universe of what made the series what it is.

So, what is it? Are they frightened that Furious 4 isn’t strong enough to sell without the Brothers in Arms name slapped on it? Do they think so little of the fans that have followed the previous games that they think they’ll buy this up simply because it has that prefix? Have Ubisoft been pressuring them to make this change based on how well Borderlands did for publishers 2K? I have no idea, but I’m not happy with any of those as answers. 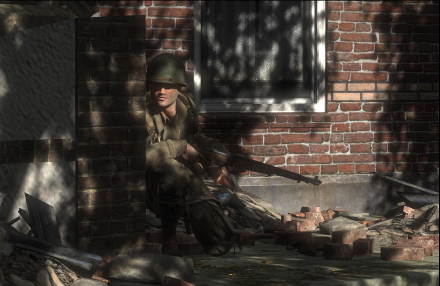 Does this spell the end for Baker and his squad?

What’s in a name, though? That’s all I’m upset about really, isn’t it? The mishandling of a beloved name of an IP I love. People who don’t hold the series in as much regard as me will probably shrug their shoulders and say that it won’t stop the game from being good if handled correctly, and you know what? I have no doubt in my mind that Furious 4 will be a good game whether it shares any characteristics (gameplay or otherwise) with the old BIA games or not. I may not like this move, but I still trust Gearbox’s ability to make great games. I just take umbrage that Furious 4, a totally irrelevant game has inherited the Brothers in Arms tag. It’s clearly a separate beast, its own thing, so why can’t it do that as a new IP? It’s just not a Brothers in Arms game.

What’s worse is that at the moment it’s unclear as to what’s happening with the old storyline. Is this a spin-off? Will we see a return to the trials and tribulations of Matt Baker and the other characters that helped set BIA apart from the other WW2 shooters on the market? I really hope so, because this move currently leaves the franchise (which was left on a cliffhanger in Hell’s Highway, by the way) in a precarious position.

If Furious 4 sells half as well as Borderlands, Publisher Ubi will no longer want the traditional BIA experience cramping its style. If it bombs, we could be left in a position where they have no more faith in the brand. Either way, I and other fans of the true Brothers in Arms are the ones that will miss out. For the moment I live with the possibility that a saga that I love may never get the ending it deserves.