Two weekends ago, Microsoft rolled out their ‘New Xbox One Experience’ to the masses and, aside from a slightly more annoying dashboard that puts the features I like to use five clicks further out of my reach, with it came the hotly anticipated Xbox 360 backwards compatibility; a welcome feature to Microsoft’s previously maligned machine.

Last Saturday morning I set about choosing which 360 games to install, eventually landing on Beyond Good and Evil, the remaster of The Legend of Monkey Island and its sequel, LeChuck’s Revenge, Pac-Man Championship Edition DX, and id’s classic trio of Doom, Doom 2 and Wolfenstein 3D.

I don’t know why, but Wolfenstein 3D in particular seemed to occupy my thoughts the most as I left my chosen few downloading and ventured out for some lunch and shopping. Perhaps it was because I seriously adored Machine Games’ epic reboot The New Order just last year, or maybe it’s because the last time I played any of Wolfenstein 3D was on my old ‘hand me down’ 286 PC, of which I have very fond memories.

So, when we got home, I booted up Wolfenstein only with intentions of sating my curiosity and testing out the backwards compatibility. I had expected this process to take a maximum of ten minutes before I would shrug, quit out and go back to something newer.

Putting aside the issue of dated visuals (which I happen to think are still pretty damn spiffing given the technical constraints of 23 years ago), the lack of plot and that awful fucking box art; where it really counts, mechanically, Wolfenstein 3D is as strong as it ever was and is still capable of providing a thrill. 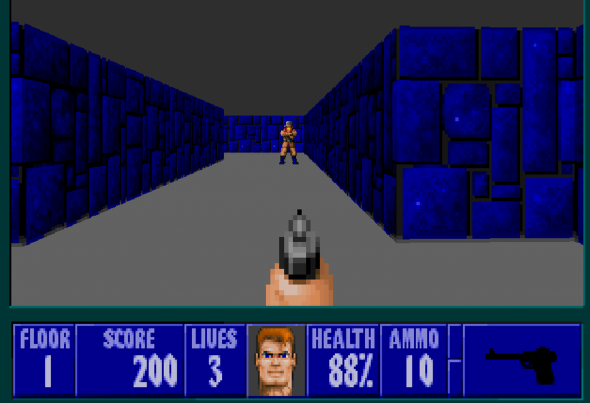 Doesn’t look like much, but age has been kind in some respects…

Of course, the FPS genre has grown massively sophisticated since Wolfenstein 3D’s original release. Shooters now require precision aiming and demand your attention all over the screen. Modern FPS players need to be wary of cover and whether or not it’s destructible, know when it’s more effective to shoot from the hip or to use iron sights, keep track of how many rounds are left in the chamber before engaging and, in some particular cases, know strategies required to take down each enemy type. These are all things we expect as the norm now; they’re so commonplace that they rarely even warrant mentioning.

Wolfenstein 3D, the game that pretty much popularised the entire genre, has none of these now-standard features. You need only to look and shoot; there’s zero sense of verticality, and you don’t even need to reload your weapon. Yet, because the most basic element – the audio and visual feedback for landing a shot – is so perfectly implemented, it’s enough for gunplay to still feel satisfying and worthwhile all these years later.

The guns – even with their primitive sound effects – still feel lovely and chunky. If you successfully land a shot on target, the enemy reacts appropriately and their animations interrupt, providing a solid visual cue of damage dealt. Because of this simple combination, within minutes I was subconsciously aware of how many times I had to pull the trigger to down a foe swiftly with any given weapon before moving on to the next, and this alone provided an enjoyable rhythm to working through the levels and taking out all threats. A rhythm, I might add, that is exactly the same as I’ve experienced in any number of modern shooters when totally ‘in the zone’, and for exactly the same reasons: Solid audiovisual feedback.

Thanks to that brilliant rhythm I, completely by accident, lost seven hours of my Saturday playing through the entirety of Wolfenstein 3D, beating it for the first time. From the second I escaped my jail cell to the moment I took down the evil Fuehrer himself, I had an absolute blast.

It just highlighted to me that although the level of complexity in shooters has changed immeasurably over the course of 23 years, some of the fundamentals haven’t really needed to. Even with many dated elements, Wolfenstein 3D is a worthy testament to that.