A Look At THQ’s Troubles

As most people should know by now, THQ are having serious financial issues. Share prices fell to such an extent that they almost got de-listed, sales of titles haven’t been meeting expectations and now they’re having to default on a loan they’ve taken out.

It’s a long and somewhat complicated story of just how THQ got to this point. I’ll try to talk you through a few key areas, look at a couple of important events and try to predict the future for THQ and what it bodes for others within the industry.

Whilst I’m aware that most of you don’t really care about the business behind the games, I feel it’s necessary to give a little run-down on what it is that’s going on here. The games industry, after all, is a business and having a greater understanding of what’s happening behind the PR and marketing of a game wouldn’t hurt.

To start with, THQ have had trouble with their share prices for a long time. When their price fell to below a dollar a share something known as a ‘reverse stock split’ took place. This meant that (WARNING: NOT ACCURATE NUMBERS!) instead of THQ being made up of 10,000 shares worth 50¢ each, they were made up of 1,000 shares worth $5.00 instead. 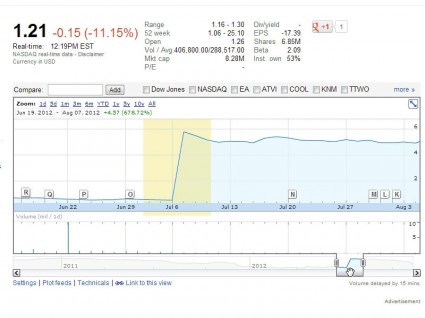 A jump in value caused by a fall in supply. Don't be fooled...

This stopped them getting de-listed, but it didn’t stop the falling prices. With poor sales figures being reported for Darksiders 2 and the announcement that a number of high-profile projects (Metro, South Park and Company of Heroes) were being delayed, THQ looked to be on less than stable ground once again.

That ground soon turned to thin-air as an earnings call removed nearly all remaining faith that there was in the company.

Just to let you know, an earnings call is literally a call that investors listen in on and regularly take part in. It gives an overview of how the company’s doing, how much they made, plans for the future, any questions – just something to keep the people investing in the company happy. It’s there to promote confidence and to make sure that people don’t start selling their shares. Have a look at the graph here, and you’ll see that this was clearly not a good phone call. 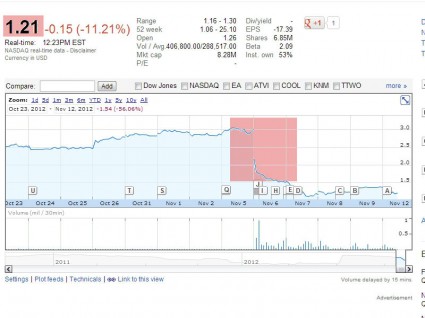 That was one BAD phone call...

That plunge took place after an earnings call that included a quote from THQ’s CFO, Paul Pucino, where he stated;

“we are no longer providing net sales and earnings guidance. And we are withdrawing our previous guidance for fiscal ’13 in our projected operating model.”

This basically means “forget what we told you we’d earn. That’s out of the window. We can’t or won’t tell you what we think we’re going to earn. We don’t know or we don’t want you to know.” Hardly the best way to gain an investor’s support. Adding to that, no questions were allowed during the call. All of this took place in a span of 12 minutes, when your average earnings call lasts 40.

If you’ve got nothing nice to say, don’t say anything at all.

Shares are crucial to a publicly listed company as they are a measure of the company’s worth. Shares, when they’re bought, represent an investment into the business. They’re a way of funding the company and ensuring that finances are taken care of. Upsetting your share holders is not the best way to go about this. Another thing that won’t take care of your finances is getting into trouble with your creditors. 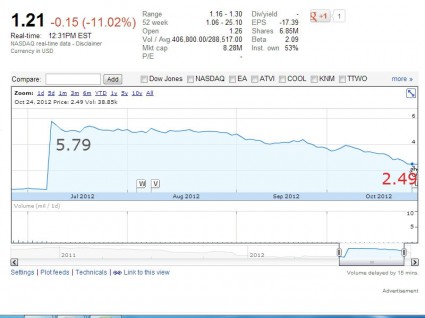 It's been a rough couple of months.

Which is exactly what they’ve done, as THQ have defaulted on a loan. At first it wasn’t entirely clear what it was that had caused the default, with the only information being from the lender’s of the loan , Fargo Wells;

“one or more events of default have occurred under the terms of the Credit Facility, including the failure to comply with financial covenants”

This was later cleared up by THQ’s president, Jason Rubin, when he confirmed what everyone suspected – THQ had failed to repay what the owed. Rubin was quoted as saying;

The issue stems from a relatively small amount borrowed against the credit facility in mid-October 2012, which was subsequently repaid in full. THQ currently has $16.4 million outstanding on its facility, which is unchanged since we released second quarter earnings”

A company having a loan is a common thing. It happens all the time and is often the easiest way to secure growth of said company. Where loans become an issue is when they’re not managed properly, like in this case, with potential financial penalties for breaking the loan agreement having been placed on THQ. According to the loan’s terms and conditions, if they remain in default then their interest rate increases by 2%. Think of it like if you go over your overdraft limit and your bank charge you for doing so. Kind of and on a much larger scale.

You can also bet that any further loans that Wells Fargo offer aren’t going to be particularly favorable from an interest point of view. THQ have now, essentially, got a worse credit rating and will find themselves having to pay a premium for any sort of monetary lending. So it’s not the best news in the world that Wells Fargo have said;

Whilst this will help in the short-term, you know, what with employees, rent and utilities needing to be paid, this is not conducive to THQ’s long-term success or even survival. What would help them is games, lots of them, but that’s not likely to happen either.

What were once pretty big players for THQ are now either sold-off or they’re not selling in the quantities needed. 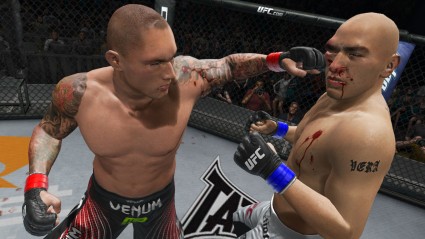 THQ are looking like they're out on their feet.

UFC failed to meet expectations with regards to sales and now that license has been sold off to EA. Red Faction had a poor reception to its latest installment and as a result the entire franchise has been shelved. Darksiders 2 has managed to break through the 1 million mark, though it’s thought the game needs to sell 2 million to break-even. When a game has to sell that much to break-even, you’re in trouble.

Another area of the games market that used top help support THQ was the licensed kid’s TV show games that they used to churn out. The countless Spongebob, Madagascar and other Nickelodeon games that used to sell just don’t anymore.

THQ knew this was the case and struggling to deal with the changing gaming landscape and seeing their tried and tested methods failing before their eyes, THQ attempted something different. A commendable action that ended up in them creating the UDraw. Whilst it was a moderate success on the Wii, the drawing tablet for home consoles never looked like having any real legs, yet THQ pushed on with it anyway. 360 and PS3 versions of the UDraw tablet now fill warehouses with the amount rumored to be over 1 million units. Developing, manufacturing and now storing these tablets has been an absolute financial disaster. 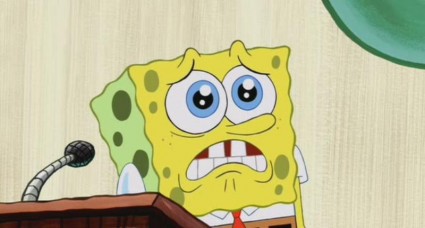 One way of seeing THQ through this trouble would be to sell off the still popular IP that they own. Saints Row, Darksiders, South Park, Metro 2033 – all fantastic properties that hold great potential, have a strong history and are critically applauded. Naturally, THQ are probably not interested in doing this. With no IP there are no games to make. Once a games company stops making games, it stops existing.

Pretty soon though, it looks like the sharks will come in to gobble up what they can. Ubisoft’s CEO, Yves Guillemot, was interviewed recently and had this to say;

“They have good things…

We are always interested in good brands. It’s something we can consider, but I can’t tell you more…

When a rival’s head compares you to Midway and Acclaim, you’ve got to be worried.

What would be even more worrying is the fact that even if the IPs don’t leave THQ, the people behind them might. Lead programmers, designers and producers aren’t stupid – they read the news and they know what’s going on. The industry is notorious for the movement that happens within companies, so it wouldn’t be surprising to see high profile departures start to happen within THQ pretty soon.

In fact, departures are already happening. Nothing that would compromise the production of a game, but heads are rolling none the less with THQ’s executive vice president and chief financial officer, Paul Pucino, resigning last week

So when you look at it, it’s a real shame. So many great games have come from THQ and a lot of the problems they face don’t seem to have any quick or easy fixes. 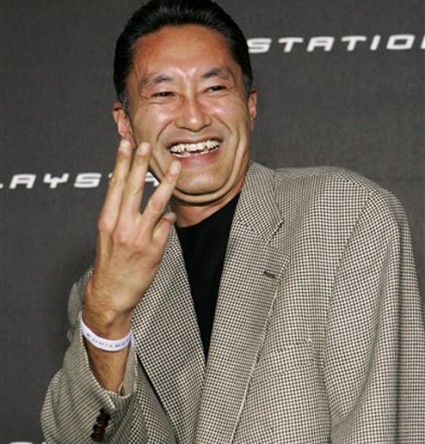 It’s also a warning to others and the sign of a worrying trend. If you look hard enough at near any publisher out there, they’ve all got their own issues. EA and Activison’s share prices have been jumpy of late. Microsoft are dealing with a luke-warm reception to their newest OS and tablet. Sony, as a whole, is struggling to make money and the poor Vita sales aren’t doing anything to help. Adding to that, their credit rating was downgraded to ‘junk’ status, meaning that financial firms don’t advice people lend money or invest in the company. Damming.

All it takes is one poor piece of hardware, one ‘AAA’ title selling below expectations or one piece of news to take a chunk out of your share value.

THQ’s story is a sad one and it looks like it can only end one way. The thing is, they’re not alone.

Look hard enough and you’ll start to see a lot of other companies dealing with their own horror story.