As soon as another Alien game came up on our motion tracker, we were nervous. Alien, as a franchise, has had a fairly rough time when it comes to videogames. Even the ‘good’ games don’t hold up to real scrutiny. Take off those rose-tinted glasses, people. Alien Vs Predator, Alien Trilogy – they were mostly rubbish. Mostly.

Also take into consideration the disastrous reception that greeted Aliens: Colonial Marines (no matter how financially acceptable it was)  and you can see why everyone was frightened of seeing what Alien: Isolation was. Luckily I can say that you should be frightened of Alien: Isolation. Not because it’s awful, but because you’re stalked by an nine foot tall Xenomorph and you’ve got no way of stopping it.

Set 15 years after the events of the first film, you play as Ellen Ripley’s daughter – Amanda Ripley. The preview I played didn’t give too much away as to the rest of the plot, but it seems to boil down to ‘Mum went MIA in space, let’s see what happened’. A good enough reason to explore an abandoned spaceship if ever I heard one.

Gameplay can be summed up in one sentence. ‘Amnesia in space’. From the small section played, you have no weapons and you’ve no way of actually fighting the alien. You’re not there to ‘win’, you’re there to survive.

It’s a little reductive, I know, but it’s the best way of explaining it in terms that people will easily understand. Never seen or heard of Amnesia? ‘Luckily’ there are a million people who have filmed themselves playing the game and have uploaded it to YouTube. Here you go. 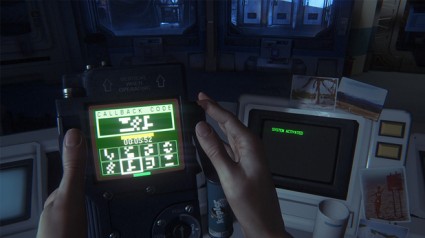 Hacking mini-games are confirmed. Don’t let that dampen your interest.

In the short demo I was tasked with finding a plasma-cutter to open a control panel with and go about pushing some buttons. Along the way I also had to restore power to some generators and hack into a terminal. This sounds pretty dull but it’s a whole different proposition when this is taking place inside of a creepy space shuttle.

Creepiness is soon replaced by fear when you eventually make contact with the xenomorph itself. Standing at around 9 feet tall and lumbering around with booming footsteps, the creature simply can’t be stopped. Your only weapon is a motion tracker and the ability to hide under desks and inside lockers.

It will kill you instantly. You don’t get involved in some melee combat, you don’t shoot your gun and you don’t mash the X button to escape. You die. It makes your time hiding from the creature all the more stressful and it means that being patient, crouching behind pieces of scenery and only using the torch when you absolutely have to are keys to survival. You’ll find yourself holding your breath as you dash from cover to cover, hoping it doesn’t see or hear you.

Which is exactly what an Alien game should be. You should be terrified of the xenomorph. You should have to hide from it. You should die if you ever engage in combat with it. The real trick will be to make sure that this remains an interesting and engaging proposition throughout the length of the game. Hopefully the amazing locations and some neat set-pieces will make this more than possible.

The attention to detail with regards to the locales is astounding. An abandoned space ship could easily come off as cliched and tired, but this is clearly an abandoned space ship that has seen people working and living on it, has seen these people run into trouble and it all looks like it’s straight out of the Alien universe. The whole game captures what ‘the future’ looked like in the 70’s. Low-res CRT monitors display glowing green text, a ‘drinking-bird’ toy bobs up and down and air vents creak and groan. Possibly under the weight of an alien?

Lighting also comes into play, with some well placed shadows that stop you in your tracks and make you hold your breath. As with any good horror game, it’s the anticipation and the false alarms that really ramp up the tension. Alien: Isolation has moments of terrifying anticipation in spades. 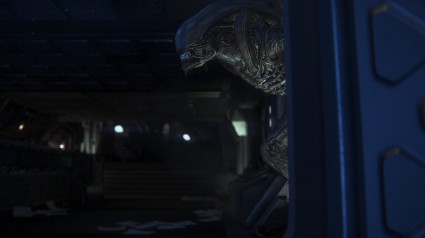 Easily the most terrifying game of hide-and-seek ever.

Fantastic visuals aside, any Alien game will live and die by its audio. Again, this is another area that the preview left me feeling confident about. The classic blips of the motion tracker not only serve a gameplay purpose but add to the authenticity and tension of the whole package. The rest of the game’s audio also helps to serve a gameplay purpose, specifically the growls, hisses and heavy footsteps of the titular alien.

One area of audio that kind of left me confused and just felt a little out of place was the voice-over of the gentleman helping you out via audio transmissions. He sounded far too young to be in charge of anything floating around space and his South London accent stood out like a sore thumb. It was just a little jarring. Perhaps the character becomes more fleshed out as the game goes on and maybe, in the future, people in their early twenties will all be flying about in space. Maybe it was just some placeholder audio – who knows? 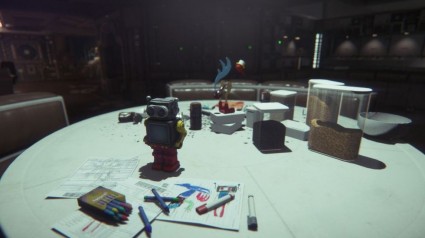 A messy desk goes a long way to making a world seem believable.

Overall, my short time with Alien: Isolation has got me excited for the final product. Set to be released on the 7th October for pretty much everything, Alien: Isolation is a refreshing take on what we’ve come to expect from Alien games. No shooting, no endless waves of xenomorph cannon fodder and a surprising attention to detail all look set to make Alien: Isolation the game the franchise deserves. Will the gameplay hold our attention for a full 8 hours? Who knows, but I’ve sure got my fingers crossed.

Matt played a 20 minute demo of Alien: Isolation whilst at Rezzed. So now you know.