Some people were starting to get a little edgy about Bioshock Infinite. It had been a while since we’d heard about the game and the only stories we were hearing about Irrational Games was the fact that people kept on leaving the studio.

Have faith though, as we’ve been graced with a new trailer and now news of pre-order bonuses, one of which is a puzzle game. Not just a puzzle game, but a puzzle game that will unlock content for use in Infinite.

It’s not an entirely original idea, to give away a game as an incentive to pre-order and to have it unlock content. Hitman: Absolution did it to good effect earlier this year, with the giving away of Hitman: Sniper Challenge. Before that, you had Fable II Pub Games which rewarded you with the money you won in-game for use in Fable II. Still, it’s enough of a rarity and enough of a neat idea to grab our attention. 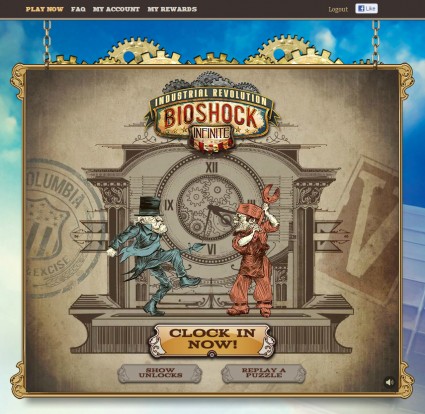 Pre-order the game to unlock another game. Hope you like games...

Also grabbing our attention is the fact that it’s not any old game that’s being given away here, with Lazy 8 Studios drafted in to create the puzzler. Crazy 8 Studios are known for their puzzle games, having won awards for their earlier work, so it’s safe to assume that it won’t be a chore to work your way through the 50+ levels that the game’s made of.

What exactly it is that you’ll unlock, we don’t know. Extra ADAM? More ammunition? Bigger weapons? A ‘big-head’ mode? We’ll have to wait and see. To pre-order Bioshock Infinite and unlock the free game, go here. To wildly guess at what it is you think you’ll unlock, go here.