Tecmo Koei Europe has announced the release date for Deception IV: Blood Ties, an upcoming PS3 and PS Vita game. It’s the latest iteration in the Deception franchise and acts as a follow-up to Devil’s Deception, which appeared on the original PlayStation way back in 1996; a game in my opinion that could arguably have gone on to inspire the Saw movies.

“Deception IV follows the story of Laegrinna, an animated fragment of an imprisoned Devil’s soul, as she battles her enemies by mischievously luring them into strategically placed traps. From rolling boulders and spiked walls to spring boards, Iron Maidens, human cannons, falling bathtubs and banana peels; the player can choose from a multitude of dramatic, sadistic, and comical traps in order to finish off an enemy.

Setting traps is not enough though, as they need to be activated in turn. Timing also plays an important role, as an untimely activation could result in Laegrinna falling into her own trap or allow her rivals to catch up her. Depending on the manner an enemy is killed or captured the Devil’s three servants: Veruza, Caelea and Lilia (each representing a different aspect of cruelty: Sadistic Torment, Elaborate Death and Humiliating Demise) reward points and upgraded traps.

Players will be able to upload their combos online (PlayStation 3 version players can upload their videos to or challenge other players to beat their highest-scoring, funniest, or sadistic combos. Other network elements include leaderboards for total Ark (points accumulated in a level), clear time etc as well as uploading and downloading user created missions (Cross-Quests). PlayStation Vita boasts a few additional features and using the touch screen to select and activate traps.”

Predictably this looks to be a dark, bizarre and maybe even weird game of questionable taste. If, however, you like your games to look like an adult video, complete with Dead or Alive style boob jiggle aplenty – all the while sadistically dismembering your opponents with countless grizzly traps of the Rube Goldberg variety – then this is the game you have been waiting for. 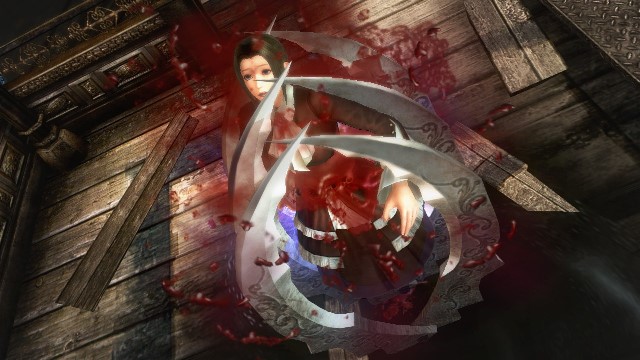 I want to play a game…

Europe, will have to wait until the 28th of March and will be able to play on the PS3 and PS Vita, while our friends in the USA will be able to access this gorefest a few days earlier on the 25th.

Personally, I have to love any game that would horrify the likes of Calvin McKenzie or the Daily Mail, but what are your thoughts? Have you played any other games in the series, or is this the first time you’ve heard about it? What are your thoughts after watching the trailer? Will you play it or will you pass on this one?