Everyone remembers Black. While Call of Duty was telling us war stories and TimeSplitters was mincing around with time, Black was a nugget of pure FPS joy. No complex plot, no gameplay gimmicks; just balls-to-the-wall shooter action. For the first time, guns really felt powerful, ripping through soldiers and scenery alike with thunderous command. Rocket launchers decimated walls, bullets tore concrete from metal girders and the body count piled up and up. Fitting then, that the latest game from the Black alumni, now settled at Codemasters, have the kill count firmly in the forefront. So much so, they named the game after it!

Bodycount was announced a while ago, to a lot of raised eyebrows. In the age of FPS domination and movie blockbuster gameplay, can it really stand a chance? I was quite confident, with Black being one of my favourite games on the PS2. Anyway, the FPS genre needs a bit of a break from the COD vs Battlefield bullshit. Duke failed to impress, Deus Ex: Human Revolution looks complex and even FEAR 3 is a bit serious. Can Bodycount break the mould and offer up some no-frills shooting joy? Well with the Xbox LIVE Gold exclusive demo now available, I gave it a crack to find out.

Right from the off, I can tell Bodycount doesn’t fuck around. After a simple mission brief and a look at the controls, I’m thrown headfirst into not one, but two simultaneous gunfights. I’m in Africa working for some sort of shady ‘network’, and the local militia’s top bollock is my target. It seems the African army have had a similar idea, and both sides are pounding each other. Of course, even though I’m not militia, the army don’t like me being there. So I have to shoot them all.

It’s good that shooting is Bodycount’s chief concern then. Instead of the usual ducking and zooming, it has a combined aim-and-lean feature. Squeeze ‘LT’ and you zoom in (as usual), but the left stick becomes your leaning. It’s jarring at first, but once you get the hang of it, it actually works pretty well. In fact, you need to use it in order to stand a chance. Even in this initial stage of the demo, I’m getting fire from at least three different angles at once. My assault rifle doesn’t suffer from realistic recoil, but it’s still tough to cover so many positions. It’s not too hard though, and soon I fight through the rubble and shacks and reach my target.

This is where the first cracks begin to show. When you get hit, the screen does the now-obligatory red bleed-out thing, getting progressively worse the more you get hit. The issue here is that there’s no definitive marker when you’re one shot away from death. Anyone who plays modern shooters with health regeneration knows that the key to progression is figuring out when you can take it, and when you have to cover; this problem makes finding that balance incredibly hard. For a game that’s all about blasting through everything, having to sheepishly duck behind a car ‘just in case’ makes me feel like I’m playing it wrong. 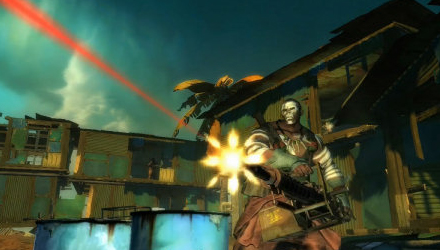 After dying a few times, I find the mines. ‘RB’ deploys the grenades, but ‘LB’ drops a little scatter of mines in front of me. It’s great for bugging out and watching the goons get blown sky-high, as they swoop in for an attack. It’s also pretty handy for ruining big fuckers who take clip-after-clip of ammo to go down.

Similarly useful is the ‘Explosive Ammo’ option. Once I’ve collected enough, erm, blue stuff, I can hit right on the D-Pad and juice my gun with cheeky bullets. While they don’t strictly explode, they do tear through things much easier, allowing me to hit goons hiding behind cars and walls. This is just one of four enhancement options, although the others aren’t available in the demo.

After dropping the boss, I get a call about a nearby signal. Instructed to shred through the wall of a tall shack, I do just that and get to see the environmental destruction up-close. It’s very impressive, with each crack spreading and shattering the metal. Pieces snap off and fly everywhere, and it’s very satisfying to cut through an entire wall with nothing but an assault rifle. However, it’s nothing that we haven’t seen before. The third-person Red Faction titles have been taking GeoMod to new levels for years now, and Battlefield 3 looks to feature extensive structure damage. It’s a shame that this is one of Bodycount’s selling points, as it doesn’t really make it stand out these days.

Anyway, I grab a server of some sort and head out to kill some more. After cutting through a swathe of army goons I run to a gate, and it’s demo over.

Despite thoroughly enjoying my time with Bodycount, I can’t help feeling it just wasn’t enough. I know it’s just a demo, but with the game out over here on 2nd September it’s not like Codies have any time to rectify the most glaring issues.

Firstly, the guns sound like SHIT. Compared to today’s blockbuster shooters like (sigh) COD and Gears, they sound underwhelming, but compared to Black they’re absolutely abysmal. Black pretty much rode on the back of it’s exemplary, action-movie gun sounds. The Uzi sounded like a mini-gun, the grenades like atom bombs. You could almost feel the AK shudder in your hands, as you pumped round after round into faceless terrorists. For Bodycount to have such weak-sounding hardware is not only disappointing, it’s astounding! I wonder if the entire Black team are present and correct, or if one or two sound geniuses have flown the coop? 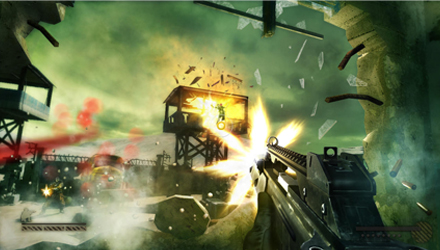 Shame it doesn't sound as cool as it looks...

The second main issue is the plot. I know, I know; I said we didn’t need any bullshit. There is actually a plot, according to the sparse website. Yet, Bodycount still just feels like a shooting gallery. Go over there, kill everything; go over there, kill everything again; grab something, go there, kill everything. It’s not necessarily too much of a problem and I’m sure loads of people will have a blast, but we’re coming up to a deluge of stellar releases. With the recession flexing it’s muscles for a comeback, people don’t have money to burn. I’m not sure if Bodycount can survive without a prominent and assuredly epic storyline.

And that’s the big one, the elephant in the room. We all know COD has the monopoly on the FPS genre right now. When Halo gets off its arse and back in the game again that may change, but right now COD is king of the FPS world, whether we like it or not. While other titles have managed to sell by doing something different, like the sublime Bulletstorm, many more attempts have disappeared into obscurity because people would rather buy COD.

My fear is that with Modern Warfare 3 and Battlefield 3 on the starting line for the winter season, punters will see Bodycount as collateral damage; a little destroyer caught in the crossfire of two massive battleships. It’s a shame; despite it’s obvious flaws Bodycount seems like a good laugh, and maybe even a good way to spend a weekend.

As for the demo, the reason it’s Gold exclusive is beyond me, but if you can get it I’d suggest you do so. It’s an enjoyable and refreshing experience, and it just might convince you to buy the game. You’re probably already buying MW3 though right? Oh, you’re not? See you on Battlefield 3 then…