Castlevania. Synonymous with vampires, whips and erm, castles, the horror-action series has been present on almost every console since its inception on the NES. My first experience was Symphony of the Night on PS1, before back-peddling to play the roots of the series on the ‘ye olde’ consoles. I’ve always found it to be tricky, inventive and very exciting.

With Lords of Shadow, the series was rebooted for the current, shiny generation to generally rapturous praise. Not wanting to leave its old home behind, Mirror of Fate followed shortly after on 3DS. Now ported to Xbox Live Arcade, it’s found a new home as a lush and surprisingly modern side-scroller.

Starting where Lords of Shadow left off, Mirror of Fate resurrects old hero Simon Belmont from the doldrums of ‘Worst Castlevania Game Ever’ and pushes him to the forefront of the narrative. If you’ve not completed Lords of Shadow yet and are spoiler-phobic, skip to the next paragraph. Now. So, Gabriel Belmont has reached his inevitable fate as the master of all vampires, Dracula. Simon Belmont, his grandson, marches off to Dracula’s epic castle in search of revenge after Drac’s monster armies take out his mum. Throughout the plot, which is well-written and compelling enough, you uncover more of the fresh backstory the reboot has established and join a few dots.

Essentially, Mirror of Fate serves as a neat bridge between Lords of Shadow and its incoming sequel. By the time you reach its end, the aim is for you to have all the info you need to go into Lords of Shadow 2 knowing exactly what’s going on. That said, you don’t have to have finished Lords of Shadow to understand the narrative as it stands alone pretty well. Filling in some of the history of the Belmont clan and also explaining a few Castlevania protagonists that previously had little to no context, while sticking to some of the established facts of the long-running series, MercurySteam have done a bang-up job of bringing Castlevania up-to-date.

Considering it’s a port from, in my opinion, an inferior handheld device, Mirror of Fate looks bloody nice. The HD re-texturing has succeeded in bringing out the stellar production design and the castle looks and feels suitably spooky and interesting. Clearly let loose with few restrictions, the art team have crafted a startlingly varied network of corridors, wings and rooms. Ranging from typical medieval dungeons to almost steampunk workshops, there’s never a dull moment as you trudge through the castle and it’s always nice to be surprised by the next area, rather than have it meet your predictions. 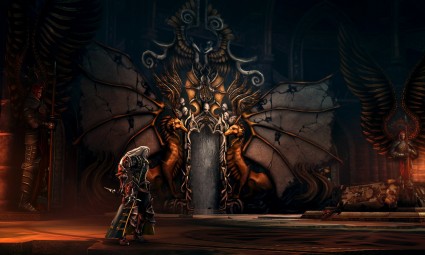 That’s a nice mirror, Alucard, but you’ve got an evil vampire lord to defeat…

The voice acting is top-notch, with Lords of Shadow star Robert Carlyle (Begbie from Trainspotting) returning as Gabriel Belmont. Joined by Richard Madden (Robb Stark in Game of Thrones) as Alucard and Alec Newman (er, he was in Spook once?) as Simon, the cast is in line with Carlyle’s native Scottish performance and reinforces the sense of family brilliantly. The fact these are three successful stage and screen actors makes their dialogue all the more believable, and what little there is sparkles from their talent and experience. The music, too, shines as an element that was clearly not left until the last minute. Quiet sections are coated in flowing, melancholy strings while combat is punctuated by striking strings, aggressive synth and powerful drums dependent on the area.

The three characters play similarly, with the signature Combat Cross playing a central role in combat. Although 3D in its design, Mirror of Fate opts for a locked, side-scrolling viewpoint which allows it to bring the fresh innovations of the reboot in line with the familiar, Metroidvania-style traversal of the original games.

Lords of Shadow’s direct attack/area attack system returns, albeit flattened to a 2D plane. It works well, with the ability to fight airborne enemies from the ground a godsend when defense is paramount. Be too brash or cocky and you can end up getting hammered, bringing some of the tension of Dark Souls into the mix, with much less of the head-smashing frustration. Checkpoints are forgiving and frequent, allowing you to try various strategies without fear of having to replay massive sections of the game. Some of the bosses, however, can be infuriating and give you little chance to beat them first try unless you’re uncannily perceptive and have superhuman reactions. 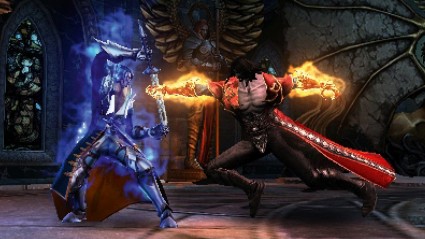 Each character has his own set of powers and special items, though whilst these are interesting, they have very basic uses. It’s neat that each has its purpose in and out of combat, but aside from sections that require their use, I found it almost optional to use them in combat. Only once or twice did I experience actually having to switch a power on to beat a foe, and usually in a way that made the fight more frustrating rather than more interesting.

Coming into its third act, where much of the interesting narrative takes place, it’s disappointing to see the creativity lose steam. It contains the least interesting set of powers, including a nice but ultimately underused set of super-jump boots that you end up needing all of three times. It genuinely feels like the team was running out of ideas. The most interesting section, a breathless platforming sequence while being chased by a falling bell, is also the most frustrating. I almost felt as if I had to die a couple of times to work out how to proceed, and at one point actually had to let the bell catch up with me before I could carry on unheeded.

The final battle against Dracula (sorry but you had to guess that was coming) was also needlessly complex. Rather than crafting a tense and tricky battle, requiring all the combat skill I’d built up throughout the game, it was pitched as a daft game of Ikaruga-style colour matching. Drac uses Light Magic, I use Dark and vise versa. This just gave me one extra thing to think about as I leaped about desperately trying to avoid his relentless onslaught. Good end bosses test your skill, knowledge and perception, often fostered during the rest of the game. Shit end bosses throw in brand new and needless mechanics to bamboozle you while in reality presenting you with a pedestrian battle. Take a wild guess which category I’d throw this one into.

Fang you very much?
I’m glad MercurySteam decided to bring Mirror of Fate. to my Xbox 360. It’s well made, true to the source material and loads of fun. Uncommonly for an (originally) handheld title, it manages to be playable for hours on end without feeling like watching an entire TV series in one afternoon; you could, however, put it down after a few minutes of play and come back fully aware of where to go next. It’s long and rarely bores, even if some of the boss design choices can sometimes make it feel like a grind.

Standing as a testament to how a good handheld title should be, Mirror of Fate is a worthy addition to the legendary Castlevania franchise. Its 3DS roots may put you off but I implore you to give the trial a go and see if it lives up to your expectations, whatever they may be. It certainly lived up to mine and I wholeheartedly recommend it for anyone who loves a pacey, exciting and densely packed side-scrolling romp.