This weekend the Brutal Legend demo was made available exclusively to gold members of the Xbox Live community in the US. With my guitar and spiked wristbands at the ready, I decided to head bang my way through this short hands-on look at Tim Schaeffer’s spiritual successor to the venerable Psychonauts. Fortunately, I was not disappointed.

The demo starts off with roadie Eddie Riggs watching a young nu-metal band from backstage. Some things go awry and Eddie’s blood is spilled onto his amulet, which unleashes a huge demon and transports him to another world. Upon waking up, Eddie is introduced to his two mainstays in terms of self defense: The Separator; a huge deadly axe, and Clementine; his electric guitar.

Gameplay is easy to get used to, and animations are smooth rather than stiff and forced. You can use both The Separator and Clementine to slaughter robed demon priests with swords and nuns with zippers for mouths by stringing together combos incorporating both weapons. The axe is mapped to the A button while the guitar is mapped to the X button.

Double Fine’s games have never been revered for how fun they were to play as much as how entertaining they were as a whole, and Brutal Legend doesn’t seem like it will stray from that trend. Eddie as well as every other character always has a witty bit of dialogue that you can listen to and grin at both while playing the game and watching the hilarious cut-scenes.

After receiving The Separator and Clementine, Eddie destroys the temple in which he awakens and boards a four-legged contraption which one of the afore-mentioned nuns used to arrive atop the mountain which Eddie finds himself on. This mountain, if I haven’t said so, is also made completely of demon skulls and bones. Just so you know. 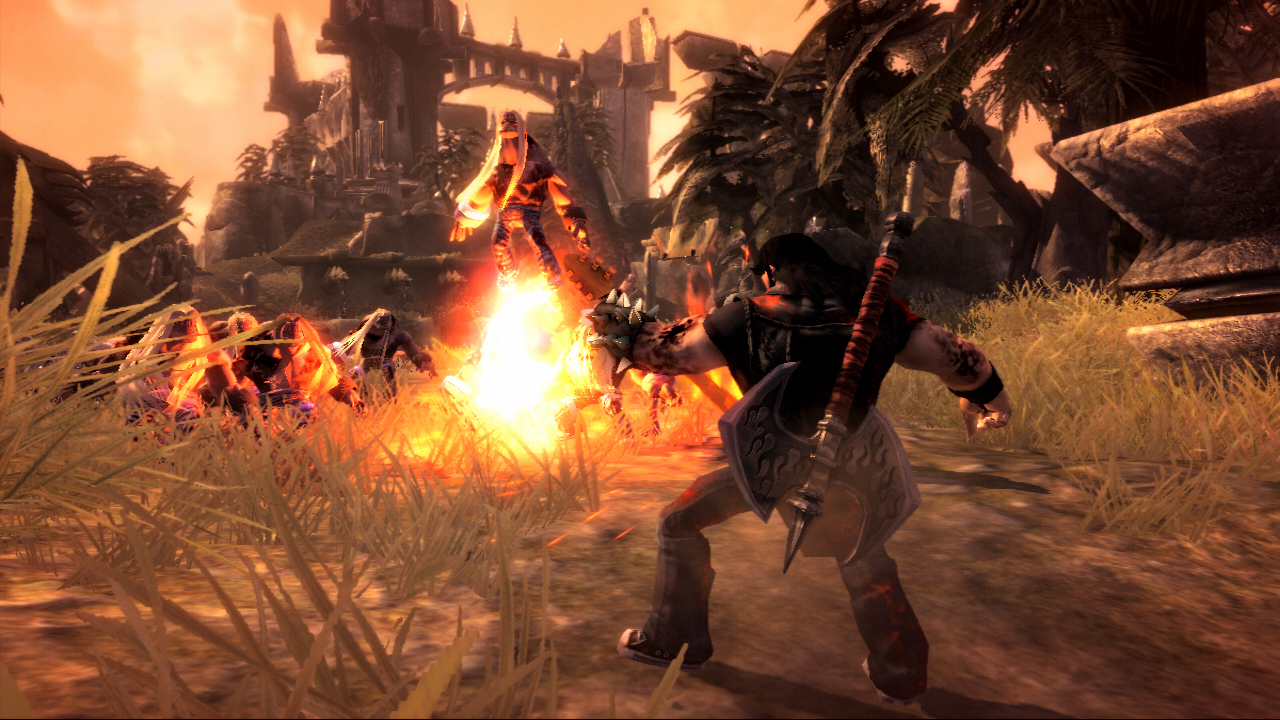 And so it was decreed that he who shall rock shall light fire to his enemies.

Once at the foot of the mountain, Eddie is flung into yet another temple where he meets a new friend and constructs his ride, The Druid Plow. Though Double Fine has made it clear that this car can be upgraded later on in the game, here it was good enough to deliver Eddie to the next area where a huge worm-like beast was waiting. After a short, entertaining cut-scene I was thrust into battle with this monster, my newly crafted car being my only viable weapon.

This boss fight was a simple one which followed the unwritten three-hit law of videogames, and from there yet another cut-scene led me to a section that was designed to be a bit of a puzzle. Here I was tasked to drop the gate which hung above the exit to the area where the creature was being kept so that it could decapitate it, but I was given no explicit directions on doing this. I won’t spoil the solution, but if you don’t immediately realize what you have to do, you’ll be kicking yourself for not figuring it out sooner when you get it done.

Based on this demo, Brutal Legend looks as though it’s going to knock loose some of the ordinary conventions of the action-adventure genre itself. Sporting Tim Schaeffer’s signature humor and Jack Black’s boisterous voice, Eddie Riggs is an instantly likeable character unlike any other before him. It’s hard to believe that Activision at one point wanted Brutal Legend to be a spin-off of Guitar Hero, but at least we know we’ve dodged that bullet. Whether or not Brutal Legend will be able to dodge the bullet of being critically slated won’t be known until its release on October 13th, 2009.