The original Crackdown was a fantastic addition to the list of ‘GTA-clones’ that we’ve been seeing over the years. Boasting crime fighting but with attitude, Crackdown had you playing a super agent, gunning down gangs of hapless crims, powerless against your super strength, agility, marksmanship and explosive abilities. What made this title addictive in particular was how your abilities would upgrade through use, or collecting experience orbs, making you even more powerful.

The Crackdown 2 demo on offer on the Xbox Live Marketplace lets you complete several objectives and explore the city as much as you can within a thirty-minute time limit; so no dithering around, lard-arse. It also features seriously sped up ability levelling, so you’ll be evolving faster than Charles Darwin on steroids. If you’re feeling lonely, you can also play it co-op with friends online, as you’ll be able to with the full game.

From the looks of the Crackdown 2 demo, not much has changed, which is mostly a good thing. The core gameplay is practically intact, and all in all the game has a very similar look and feel. This time round there is an extra layer added to the gameplay, and that is in the form of… zombies! You can just imagine the developing team sitting round a table and thinking, “Hmm, what component is guaranteed to make games even more awesome?”. As a result, during the daytime you will be crime-fighting in the usual manner, but at night you’ll have the zombies (or freaks, as they are affectionately called) to deal with. This definitely makes the gameplay more dynamic and varied.

In the demo, there are two types of objectives to deal with; one for each of the types of bad guys you’ll encounter. For the living, you have zones to clear, and then call in an Agency chopper to secure the area. For the previously living on the other hand, you set about eradicating them by capturing modules that power up a massive UV machine, as just like vampires the ‘freaks’ are sensitive to light. The objectives on show here aren’t particularly inventive; it’s just ‘kill bad guys then press a button on something’ for the most part. 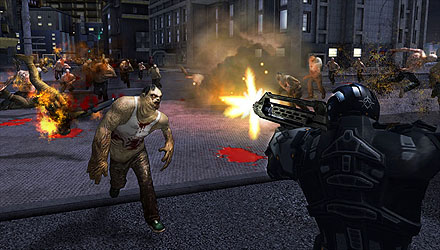 Reminiscent of crowd control at the average Millwall football match

I have to say I did miss the original layout of missions, that bared a very strong resemblance to Mercenaries; attack the enemy strongholds and assassinate a key leader to gradually weaken the gangs. Whilst not very original, I found it more interesting. To be fair though, just because these types of missions aren’t in the demo, doesn’t mean that they won’t be in the full game. Similarly the weapon choice is slim, generally coming down to either ‘rapid-fire shootah’, or ‘pump-action shootah’. There is the interesting addition of the UV gun however, which annihilates the undead, but is little more powerful than a blast of air to normal people. If there are more inventive weapons like this in the full game, you’ll have a useful and engaging arsenal.

It is slightly irritating how you are plonked straight into the action with no idea what’s going on, as the story seems even more vague than the original. The link between the gangs and zombies isn’t explained (unless I missed it), but for some reason the gangs do their best to get in the way of you wiping them out, only to get their heads snacked on as soon as they encounter any. Undead and ungrateful.

Some aspects of Crackdown 2 from the demo appear a tad clunky. The controls are decent for traversing the city on foot, but the shooting mechanics can be very hit and miss (literally), and whilst driving is probably improved from the first iteration, it can still be like a five year-old bumbling about in a supercharged Little Tikes Cozy Coupe at times. The AI is left wanting also; the first time I called in the Agency ‘Peacekeepers’ after clearing out the area of enemies, they saw fit to gun me down as a thankyou, despite me never laying a finger on them. The graphics were also never spectacular in the original, but in Crackdown 2 they are definitely disappointing, with muddy and bland textures all over the place. 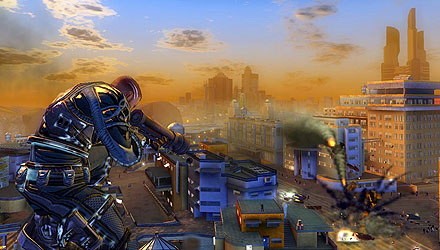 For those who used to love torturing ants as a kid

I have definitely laid down the law on the Crackdown 2 demo, but don’t let this fool you into thinking the game is totally out of order. Firstly, I didn’t particularly like the structure of the demo, and it took me a couple of playthroughs before I got to grips with it more. The time limit imposed for the demo is also a nuisance in a game of this ilk, where you’d much rather be arsing around blowing things up or exploring the city than rushing from objective to objective. I generally get the feeling Ruffian Games aren’t showing us all there is on offer here (at least, I’m hoping so), and that there will be many surprises in store for those of us who cough up the cash for the full version.

That said, I’m disappointed that some issues with the original haven’t been more improved on, and that there’s a lack of innovation evident at least from this demo. The game is still, however, a great laugh and full of the same action-packed fun of the original. I won’t be pre-ordering it, or taking a trip to the shop on the release date, but I’m definitely still crossing my fingers and holding my interest on Crackdown 2 after playing this demo.