Stepping out of the tent of my four Choco-Bros and seeing the open, rolling green hills of Duscae for the first time has undoubtedly been one of my favourite moments of 2015 so far. Final Fantasy XV: Epsisode Duscae, a generous, 2-3 hour demo for Final Fantasy XV (included with the PS4/Xbox One remake of Final Fantasy Type-0) provides you with a gorgeous, sizable playground to explore, a powerful boss to hunt, plus plenty of wildlife to slaughter as you get a feel for what’s new and what will be on offer when the full game releases.

The end result? I could not possibly be more excited to play the full game.

The demo kicks off with our four heroes waking after a rough night’s sleep on the plains of the Duscae. The night before, their car – the Regalia – broke down on the way to Cauthess and, although it can be fixed by a local mechanic, it’ll cost them 2400Gil that they don’t actually have. Luckily for them, a dangerous Behemoth known as Deadeye has been terrorising the area, and a bounty of 2500Gil will be given to anyone who can take him down.

From the first moment I was put in control, I was stunned by just how gorgeous it all looks. Duscae is a beautiful area, with expansive fields and forests; a central lake glistens as humongous, passive creatures enjoy the water. Around the edges, roads box Duscae off as cars intermittently zip by. It’s an interesting mix of visual styles in this sense; a naturalistic landscape littered with fantastical creatures and strange rock formations, its peace punctuated around the outskirts with the occasional noise of modern vehicles. The movement of Noctis and the gang as you take your first steps too is also impressively lifelike, as they walk and run around the world, reacting to the terrain and the objects around them. Clothes in particular react brilliantly to the conditions too, such as when a Magitek drop ship flies overhead, causing hair, jackets and the foliage to flap or flatten aptly.

Reacting to the world is exactly how the troupe spot areas of interest or find missions. Your buddies will stop to point out items in the immediate area, and you can lock on to investigate further if you wish. Early on, for example, I noticed a Lion King-style rock feature overlooking the valley and moved to check it out, and to its right was a relic that gave me an incredibly useful ability. I might have missed it entirely had one of my friends not made note of it; it’s a handy, subtle way of saying ‘hey, you should probably give that a look’. I picked up a handful of side-missions in much the same way later on, one leading me to track down a rare (although sadly unrideable) black chocobo, and a mission to wipe out an entire herd of harmless, cattle-like creatures known as Garula. 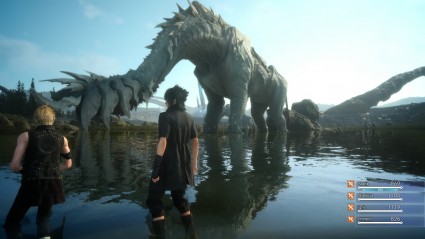 Despite items to find and a couple of side-missions to discover, there are really not that many things to do around Duscae outside of the main objective of killing Deadeye. That said, I had much more fun exploring and taking in this world with not much to do in it than I did recently in Dragon Age: Inquisition – a game where you can’t walk a few feet without falling over something to do. Of course, you do get to fight a whole bunch, which helps.

Episode Duscae wastes no time in showing off the series’ brand spanking new combat system either, as your compatriot Gladiolus is eager to give you a training session the moment you’re in control. I’m just going to say it upfront: this combat system is fun.

When enemies approach you in the field, you’re not transported to a separate but appropriately themed battle arena; instead you engage them right then and there. With most of the previous Final Fantasy games being turn-based at least in some way, I had worried about Square Enix’s ability in regards to real-time combat, but the result is a lovely dance of hack ‘n slash, dodges and counters, with brilliant visual and audio feedback for successful hits.

The counter mechanic is similar, in theory at least, to that found in the Arkham or Assassin’s Creed games; you need to spot the visual indicator in time and hit the dodge button and follow it up quickly with an attack. I did have issues landing this a lot more than once outside of Gladiolus’s tutorial, though, so I can’t help but feel that it needs work or could have been explained a little better. That visual indicator can get a bit lost in the action too.

Stringing basic combos together, however, is as simple as holding the attack button. You can also spend MP to dodge or warp attack an enemy, and utilise more powerful techniques to give you the advantage. Use too much MP and you’ll be put into ‘Stasis’, which slows you down and prevents you from dodging. This means that you’ll have to keep out of the fight in cover points while you recharge or, better still, catch it before you run out, and you can warp to a high-point to speed up the recharging process. Sadly, this isn’t dynamic; you can only warp to specific high surfaces, in this case the pylons littered around the map. 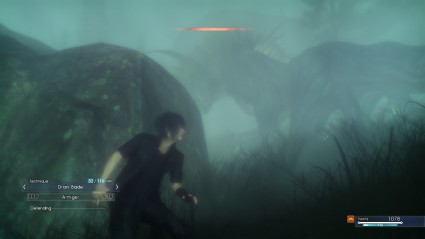 Yup, there’s a stealth section. Follow Deadeye to his lair…

Prior to playing, I was also concerned that controlling only the one character would get old fast, feel restrictive and lose the series’ famed strategy, yet your A.I. buddies act well in supplementing your attacks and in keeping you alive. Should you find yourself with no HP, you won’t die immediately. You can stagger around the battlefield until you make use of a potion or one of your team-mates comes to your rescue. They’re pretty diligent with this, but if your party is overwhelmed and they’re preoccupied, you might need to meet them half way. This isn’t a one-way process either; you need to return the favour and get them back to their feet too, as they’re more valuable to you in the fight than out of it.

Instead, strategy comes from making sure weapons are assigned to the right role to suit the type of fight you’re in. For example, you can assign a sword to the ‘Crush’ role, which is your opening attack; a sword in the ‘Ravage’ slot will be used for the continuous attacks following that; and a sword in the Vanquish slot will round off the full combo when the enemy has the decency to die or get knocked down. If you’re fighting a nimble enemy, it’ll be no use having a large, heavy sword for your opener, as you’ll just never make contact. Thankfully, you can swap your equipment and weapons around at any time during combat by entering the menu and, while it’s only a small taster here in this demo, finding the right combination seems to be a satisfying component.

I really enjoyed the mixture of beasts to do battle with; it’s a small selection here, but it gives you a good idea as to the variety found in different species’ temperaments and attack patterns. The most common and aggressive foe were the Sabretusks, who attack you at first sight and are quick and aggressive. Then you have the placid, herds of aforementioned Garula, which are harmless normally, but they put up a mighty fight should you threaten their group.

At night and in caves the goblins come out, dressed just like they were in the original 2D Final Fantasy games, and they are both genuinely creepy and much fun to fight. They also love to steal potions off you, and if you’re not quick enough, they’ll smash them on the ground. You also get a good chance to fight the Imperial Magitek Soldiers, who regularly get dropped off in a manner not unlike that of the Enclave in Fallout 3, and usually right when you’re in the thick of a tough fight.

If you follow through the main thread of hunting Deadeye, at some point you’ll acquire the only summon in the demo, Ramuh. This summon is not only vital to defeating Deadeye (a process I won’t go too deeply into), but it can be used at any time when Noctis reaches zero HP. While this summon deals huge damage and is brilliantly dramatic, it can feel a bit of a cheat as it literally kills everything in this demo first time. That said, his involvement will not provide XP if you’re battling with standard foes. 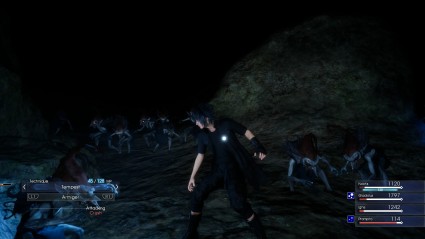 These guys look incredibly creepy in the dark…

Talking of XP, levelling is no longer managed in real-time or post-fight. Perhaps in a nod to the Souls series, you need to camp at appropriate spots around the map before your XP gets applied, and your characters level up while sat around the camp-fire. I have no real technical reason to, but I really liked this approach; it adds credence to the idea that these best friends are getting stronger together which, at this point anyway, seems to be one of Final Fantasy XV’s central themes.

I know that, so far, Final Fantasy XV has drawn some criticism for not having any playable females (and because the key female character in the demo is a little over-sexualised), but the dynamic between the four boys is pretty fascinating. Walking along they’ll have entertaining conversations about getting the hang of fighting or having pebbles in their shoes, not unlike the conversations found in Dragon Age.

Little things here stick in my memory with this. Upon finding a small Chocobo Ranch on the outskirts of the area, for example, Prompto got excited and sprinted off to see the giant birds. I decided to have my party rest in a rentable caravan there, and in the morning when Noctis stepped out onto the ranch, the other characters were off doing their own thing; one waved from a distance and shouted ‘Morning!’ It’s endearing in all the right ways. I can’t wait to see how their relationship develops with better context in the full plot.

So, I realise now that I’ve rambled on for over 1700 words, which is pretty excessive for a This Is My Joystick ‘Hands On’, but honestly, I could have easily gone into so much more detail on each and every aspect that I’ve mentioned so far. That said, I’d better wrap this up.

At this point, both visually and technically, Final Fantasy XV is looking to be exactly what I expect from a next/current/new-gen game, playing brilliantly and looking bloody amazing doing it. There are some minor issues that Square Enix need to address, certainly, but if you weren’t a fan of XIII (I am, sorry!), then you might just consider this demo to be a sign that the series is moving back in the right direction. I really cannot wait to play more.