We have all been waiting for Heavy Rain. It is fair to assume that, I think. It has been in deveolpment for almost four years, and has been hotly anticipated since its announcement. However, it has also been apparently shrouded in mystery; the biggest being ‘is is actally going to be any good?’ Well, Andy already gave his impression after last year’s Eurogamer Expo, but thank the Lord for demo’s, because now we all get to find out, don’t we?

The demo takes you through a short tutorial and two gameplay scenes. The tutorial is essential as the controls seem somewhat alien; to me, anyway. The tutorial takes you through a dark and dank alleyway, and, unsurprisingly situations arise that mean you have to try out the techniques. For example, a dumpster blocks your path, and you are required to squeeze by. Press a button, watch an animation? No, no, not with these guys! You have to time button presses, or else your man (Scott Shelby) gives up. Sounds easy, doesn’t it? Well, actually it is not. Give it a go, and you’ll see what I mean. The two full scenes that you get to sample are quite different; in the first you question a victim/witness and get into a fight. The second sees you (now a different (and hunkier (yes, I notice these things)) man named Norman Jayden) investigating a crime scene.

As I have hinted, the controls are quite strange, but not in a bad way. They take some getting used to, but I consider them to be innovative, rather than being different for the sake of being different. The fight scene is case in point. It would be easy for Quantic Dream (the developers) to require you to simply reapeatedly press button (X) to punch your adversary to the ground. Instead you take out the bad guy by, yes, timing button presses with the screen prompts. I don’t think I am doing this much justice, but it is harder and more immersive than it sounds. Unless I am mistaken, the sequence of buttons needed is random, and therefore throws you off a bit. Kind of like being in a fight… hold on. Do you think that’s why they did it? Well, it works.

The second odd-but-good controls section that I will mention is demonstrated in the second scene. You are investigating a crime scene; a body has been found, and you need to find clues. I won’t spoil this, but you will find yourself, at some point, traversing tricky terrain. This is when if you didn’t take my advice and skipped the tutorial you will really notice it. Timing, patience and skill are all required. Unfortunately I am not blessed with much of any of these, but I did triumph, and felt some acheivement. This isn’t traditional platforming in the sense that you hurl yourself from one ledge to the next, but the principle is the same. It feels so different, though. You have to think about what you are doing and I really enjoyed it. 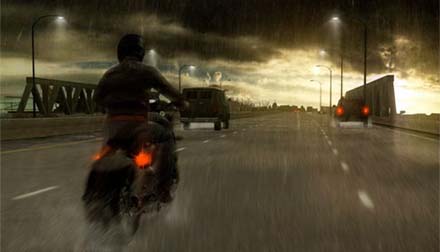 That's a lot of water!

I think you can see from this screenshot (which admittedly wasn’t taken from the demo) that the graphics look superb. I can not imagine how hard water is to represent graphically, and as the game title suggests, there is a lot of water. Thankfully the developers did a great job, and the pouring rain, which adds to the dark atmosphere, is so realistic you don’t really notice it. Facial animations seem believable, too. The ‘out of the ordinary’ actions, in my view, best show off the skill and effort put in by the developers. Shelby clearly has an asthma problem, and as someone who has spent many of her former years drawing on an inhaler, I could empathise with his suffering. Similarly, when you are pounding the bad guy’s face in the first scene, you are treated to many animations and movements that make the brawl look and feel more realistic than other games I have played.

If you are anything like me, sequences like this will make you feel like you are controlling an actor, rather than a game avatar. The difference, however, between this game and more traditional ‘punch people until they die’ games is that you are playing through, I believe, set sequences rather than fighting in your own style. This is not a criticism, though, in fact this does not bother me at all, as it still works.

Add to the quality visuals some sublime sound effects and voice acting, and we have a very promising game. I mentioned that this feels quite movie-esque (a very dark, slow-paced movie), well, I think you can guess where this is going. The exceptional sound does nothing to lessen this vibe. You get to choose, to a certain extent, what you say to whom at certain times. Games that employ this methodology can suffer; they can sound quite disjointed, and lack flow. Heavy Rain seems to somehow avoid this. Rather than merely repeating the last line spoken by an NPC, or waiting patiently while you decide what to say or ask about next, the game mechanics recognise that you are dallying, and the NPC provides a legitimate prompt, or assumes you have finished talking.

All in all this game looks and feels great. It won’t be everyone’s cup of tea though. It is slow moving and careful and feels feels very immersive, requiring you to think about your actions and consider your next move. While it does not look like it will raise adrenalin levels through bullet dodging, I do think it will succeed in its attempt at thrilling you. It plays out like an old style point-and-click adventure, but with updated mechanics and techniques. I think that if you like those types of games, you are going to love this… and then some.