A little while ago I flew the TIMJ flag at The Gadget Show LIVE in Birmingham, schmoozing (if you could call it that) with Rebellion developers and generally having a great time. One thing that especially caught my eye was the demo of a game called Spec Ops: The Line. While I’d read a little about it and heard the name of the series before, I knew little to nothing concrete. So it was with a fresh pair of eyes I picked up the grubby cabinet controller and had a go. Check out my video coverage of the event to see what I thought.

Now that very same demo is available to all, I gave it a download to see if it could still hold its own without the excitement of a good expo.

The demo starts with a seamless menu transition. A torn US flag flaps wildly as two choppers zoom past it at great speed. Soon enough the camera pans in to one of them and you’re there, wiping out enemy copters with a brutal mini-gun. What could have been a standard on-rails section is made fresh by the fact you’re careening around a derelict and sand-wrecked Dubai, weaving between skyscrapers and construction equipment. Soon enough you hit a storm, sending an enemy helo crashing into yours and blacking you out.

A flashback scene fills you in on the story. Captain Martin Walker and his elite Delta Force team have been assigned to track down missing US Army Colonel John Konrad. Stationed in Dubai during a biblical sandstorm, Konrad refuses to pull out his unit, the 33rd; instead choosing to stay behind to help the locals. After weeks of no contact he’s assumed dead, until a faint distress signal is picked up. This leads to the Army deploying Walker, which kick-starts the game. Obviously plot details are thin on the ground in the demo, but there’s more than an inkling that the The Line is going to be just as much about tense plot twists as visceral shootouts.

The demo lets you control Walker (voiced by everyone’s favourite game actor, Nolan North) and his squad through numerous combat sections, fighting outside and inside, across rooftops and through a destroyed hotel. It really showcases the range of environments on offer; although, the constant abundance of sand runs the risk of making everything look the same. Dubai is a city mostly passed over by video-games and it’s nice to see it represented here rather than New York or Paris or London. 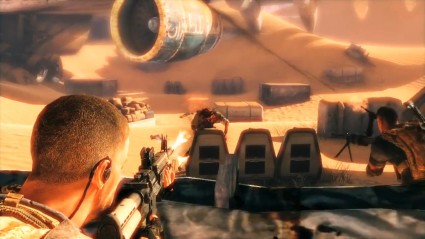 A familiar angle to view the action but a comfortable one nonetheless...

As you trek about there’s a distinct feeling that story is hugely important in The Line. Entire sections pass without combat, the game favouring team banter and movie-like dialogue. Even during shootouts the squad are conversing, really impressing the feeling of bonding and togetherness. Ambushes are responded to with tense conversation and bargaining rather than the usual instant massacre, and enemy locations and statuses are shouted constantly.

It’s instantly obvious that these guys are firm friends and have been fighting together a long time but still remain absolutely professional in the heat of combat. There’s a fine line between funny and silly when it comes to dialogue, especially in video games. It seems Yager have got it spot-on here; team sniper Lugo cracking wise and Walker putting him in line raises a good chuckle.

The combat overall is a neat mix of the traditional and the new. While the raw mechanics will be familiar to anyone who’s played a cover shooter, touches like the squad commands and the executions lend a fresh edge to the gameplay. By holding RB and targeting an enemy, you can give your boys context-sensitive orders. While a close enemy will get a simple face full of lead, a distant one will get the business end of Lugo’s rifle. It’s intuitive and simple to use in intense combat.

When prompted the command can also be used to flash or suppress the enemy, showing off the top-notch squad AI. Not once did either of them run into enemy fire or act out of turn; I genuinely felt like they could handle themselves. Melee is brutal, one tap of B sending a baddie flying and another activating a tasty execution. The much-touted ‘dynamic sand’ hazards seem very set-up but enjoyable; they can work both for you and against you. While it doesn’t reinvent the wheel, it certainly serves its purpose and makes for frantic and fun firefights.

Intel is scattered about and comes in interesting varieties; the demo alone contains a plane’s black box and a journalist’s recording. These bits of info give you unnecessary but intriguing insights into the overall plot, and hint that there’s more to Dubai than meets the eye.

Overall the demo is a great example of what Spec Ops: The Line will have to offer. Cinematic set-pieces and character-building dialogue compliment exciting, tactical action shooter combat, complete with its own unique flairs. My only worry is that the standard of storytelling will plateau when applied to a full game, and the fun but generally unremarkable combat will become padding between story-driving cut-scenes.

I can understand why the world isn’t wetting their pants for The Line; on the surface it does appear to be just another military shooter, or ‘Gears of Warfare’ as one forum poster put it. I hope it turns out to be a great game, if not an exceptional one, and I encourage you to give the demo a try for yourself.