If there is one game with the most presence and hype around it at Eurogamer this year, it’s Battlefield 3. DICE have not only secured themselves a huge floor space, right at the entrance of the over 18’s area of the exhibition, but managed to bag one of the first developer sessions of the weekend, straight after the PS Vita.

Battlefield 3 is clearly fighting tooth and nail to get all the attention this weekend, and so far it has done a damn good job. Not once have I walked past their area on the exhibition floor and there hasn’t been a queue of at least half an hour’s wait. This truly is a testament to the hard work that has gone in to Battlefield 3 from their entire team over the past few years, and from being at the developer session Thursday, I learned just what Battlefield 3 means to the DICE employees.

This was my first developer session at Eurogamer, and I wasn’t sure what to expect. Sitting in a room full of around 200 press and fans, Karl-Magnus Troedsson, Vice President and General Manager of DICE greeted us all with a warm welcome, letting us know that the only reason he was in London was to see all of us for this keynote.

He opened his presentation, showing us some previously seen trailers, which look even better on a giant projector and sound incredible on the speaker system, which was big enough to power a small concert on. It was at this point he transitioned into talking about Frostbite 2, and what the engine means to DICE and the franchise as a whole. The phrase “Frostbite 2 allows us to make Battlefield 3 the biggest and [hopefully] best Battlefield game to date” stuck out in my mind, probably because it was repeated a few times, as it really hit home just how big they believe this game can be. 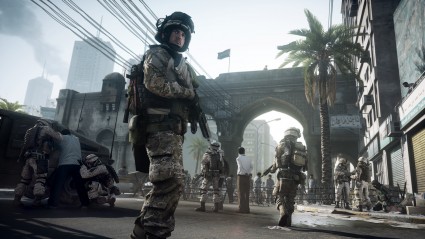 The visuals alone are stunning in Battlefield 3

The Frostbite 2 engine has five “pillars”, according to Magnus Troedsson: Rendering, audio, destruction, animation and acale. According to him, these five aspects of the engine should all behave realistically, a feat which DICE have strived to achieve with their engine. For animation, they approached sister production teams in EA that produce the EA Sports games, and asked for their help with creating life-like motions and actions for their in-game characters. This is noticeable when playing, as your character feels and behaves in a far more realistic way than the characters in their last outing in the franchise; Bad Company 2. The audio, rendering and destruction in the game are outstanding, although according to Troedsson, you won’t get the full extent of the rendering unless you’re on a super-spec computer. 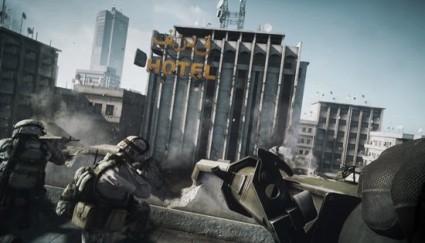 A shot from the "Fault Line" single player trailers showing the frostbite 2 engine.

Troedsson then played part of the single-player campaign, showing that there is more than just multiplayer to the game. In fact, there are three different ways to play. Both single-player and cooperative play have their own campaigns. Whether these share levels in any way, remains to be seen, but it’s good to know that there is more to Battlefield 3 than just the multiplayer matches.

Then came the moment we’d all been waiting for. We were instructed that no filming was to be taken, as we were about to see a world premier in the form of one of the US TV adverts. It was precisely what I expected; guns, explosions, tanks, jets, everything that makes up the Battlefield experience.

Questions followed the trailer, with most being about the maps and the map sizes, as well as the replacement of the Commander class from Battlefield 2, with the reason being attributed to the player assuming the role of Commander always running and camping at the back of the map for the entire game. It was after the keynote had finished that I approached Mr Troedsson for some exclusive information for This Is My Joystick:

James O’Leary: You mentioned e-sports during the questions section. Are there any plans for Battlefield 3 to become a competitive game in the future?

“Definitely, it is something that we are all very interested in at DICE. Battlefield 3 isn’t shipping with quite the components needed to make it competitive, but they are certainly in production and will be released in the coming months.”

The developer session provided some excellent insight in to the confidence the DICE team has in the game and, without mentioning it by name (referring to it only as a marketing war) the game’s ability to compete with Modern Warfare 3. The only thing left to do was to go play the game…