BMX games have always come behind skateboarding games in sales, popularity and quality. While the boarders have got constant updates, reinvention and innovations, the riders have been left in the lurch, so much so that the best BMX simulator we have is actually a feature in a Tony Hawk game. Maybe it’s the money skating has had thrown at it in the real world, maybe it’s because it’s cheaper and looks cooler that riding a bike. Whatever the reason, it has ramifications in the gaming world, with very few decent BMX titles available and none on the current generation of consoles.

Everything feels like an afterthought. The control is terrible which is astounding considering the fact that its running on the Dave Mirra engine. How can a studio screw up its own control engine? The tricks are bland and awkward, grinds being the only thing that doesn’t take holding three buttons to pull off. The bails and connection control is worse than the first Tony Hawk title, despite that begin released in 1999 for the previous generation of consoles. Everything feels harder than it is, mainly due to the erratic bike control. You always seem to be going too fast and are never able to stop in time. As soon as you start peddling you’re going super-fast; fine control is impossible. This makes basic things like accepting tasks and collecting missed items a chore. Add to this the presence of smut, sexism and bigotry everywhere and you get an experience that’s like wading through shit; it’s bloody hard and you feel dirty afterwards. 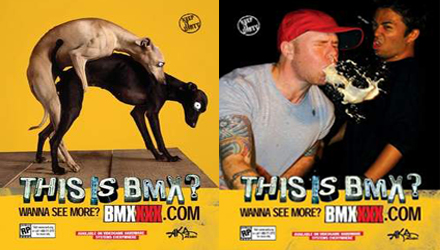 Dog's humping and a guy throwing up?! This is so controversial I just have to buy this game!

Hexagonal Breasts
I might as well talk about it now. The amount of controversy rammed in this game could fill 100 GTAs and there’d still be enough left over for a couple of Saints Rows. The streets are populated exclusively by bums, prostitutes, pimps and fat, corrupt cops. They all seem to exist solely to get in your way and shout profanity at every opportunity. Rather than being a part of the setting (as in GTA) or an amusing parody (as in Saints Row), the dirt is used as a basis for everything. The first mission I came across involved taking hookers back to their brothel. No, seriously. All the while they’d be saying things like “Oh baby you can ride me any time” and “I wish this bike didn’t have a seat”. I’m actually deadly serious about that last one, if you can believe it. When you reach the brothel, you’re greeted by a pimp who says “Get in there before I cut you, bitch” to the working girl and “I will staaaab you motherf**ker” to you. Cheers mate, nice to know you appreciate me giving your lady a croggy home.

I see where they were going with it. They were trying to appeal to the hate-loving ‘gangsta’ types who thought that listening to Eminem and calling their roughish council estate ‘da ghetto’ made them tough. They were targeting the blokes who go to the pub every night to talk about football and stare at the barmaid’s tits, chuckling as they do, firm in the knowledge that they are ‘men’ and that’s just what ‘men do’. The problem is that the former group make up about 1% of the population of the UK and probably about the same percentage of the dedicated gaming community. The latter group don’t really play games, unless it’s FIFA or maybe a spot of Tiger Woods. They targeted a demographic who wouldn’t give two shits about their smutty, awful game. 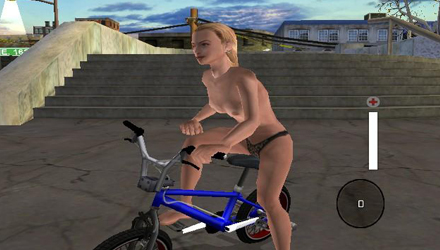 Oooooh square boobs! The controversy is almost too much!

Talking of smut, it’s actually more hilarious than it is arousing, to no great surprise. Topless girls are all well and good, but when the graphics are so bad that every pair of jugs has angles and a point the reason eludes me. Did Z-Axis really think that we gamers were so depraved, so desperate for a look at the female figure that we’d buy a crippled, broken and unplayable game just because it had hexagonal breasts in it? I’m insulted.

Verdict
In fact, this whole game is one big middle-finger salute to the gaming community. Z-Axis obviously thought that by putting naked chicks and enough profanity to out-swear a cheap gangster movie that we under-sexed, under-appreciated, outcast and downright rubbish game geeks would lap it up. Well, f**k you Z-Axis. Straight up. The only people that this game appeals to are morons or those who are so addicted to tits that they get all hot under the collar seeing Lara Croft’s square boobs, completely motionless on her triangular chest right back in Tomb Raider 2. The game plays like shit, looks worse and sounds like a 13 yr old chav’s birthday party after mummy brought home some MD 20/20. Avoid it unless you like being patronised and treated like the guy who has a sly one in the porno theatre.

Christ this is getting worse. Let’s hope MTV Music Generator 3 will be a nicer experience when I look at it in the next instalment of Digging for Gold!