I am a lifelong Superman fan. Since I first saw Christopher Reeve don the red cape when I was very small, the hero has always had a special place in my heart. So imagine my misery every time a new Superman game is released. I try it out, excited that they may have finally managed to capture the magic of being the Caped Crusader and NOT built a shit awful game around it. As you may know, I’ve been disappointed every time.

Either Superman has become a weakened husk of his glorious self or the game built around him has been so bad it made the next TV excretion from Katie Price look good. So imagine my surprise when I found the Superman game of my dreams, buried under a different title; Justice League Heroes. Developed by Snowblind Studios, this RPG-cross-multiplayer beat ‘em up came out in 2007; a full two years after the launch of the Xbox 360. With no next-gen version, it was overlooked by many, the public’s focus firmly switched to the future. Did they miss out on a gem or make the right choice? I’m here to find out…

Go Go Justice League! Wait…
Okay, so for those of you who don’t know, Justice League is a band of DC Comics heroes who have joined together to fight crime. The members have fluctuated since the Leagues creation in 1960 but it has almost always contained Superman, Batman, one of the many Green Lanterns, Wonder Woman, Flash and the Martian Manhunter. Other members include Green Arrow, Aquaman and Atom. They had their own comic until 1987 and that’s pretty much that. I could go on for hours about the Justice League’s comic book history but that’s not the point. The point is that Snowblind made a game about them and it’s actually quite good.

Now I’m sure there are those of you out there who think, to be frank, that Justice League and possibly most superheroes are crap. Pansies in daft suits. Well everyone’s entitled to their opinion and trust me, yours will not soil your enjoyment of this game regardless of what it is. Following the template set out by Baldurs Gate, JLH puts you in the shoes of the titular crime fighters in a top-down, hack ‘n’ slash style romp. The plot is quite good, worthy of the comics. Old arch enemy Brainiac sends his robot armies to rob S.T.A.R Labs of some Kryptonian DNA and a chunk of meteorite. After the League save Metropolis from the steel legions, they have to stop an inter-dimensional jumper called The Key from hijacking some nukes and bombing Mars. Why? To release the imprisoned, xenophobic, supremacist White Martians of course! Then some other stuff happens that I won’t give away and it all gets pretty exciting. Ok so it’s not the most logical plot but it suits the comic book roots and is carried out by some decent cutscenes.

The gameplay is pretty basic but never really gets boring. You have a light and heavy attack, a button for picking up cars and stuff and a jump, which can also be used to fly, glide or double jump depending on the character. Each hero has their own set of special powers, accessed my holding a shoulder button and using the face buttons. The powers are just right, allowing you to use the abilities each character is famous for. Batman’s got his Baterangs, grappling hook and those cool smoke bombs to stun enemies. Flash can pinball between numerous enemies, spin to create a whirlwind of pain and rush through foes like a hot knife through butter. Superman has heat vision, ice breath, a mega punch and rushing attack and how does he block? He sticks his chest out, hands at his hips and takes it. It’s great to finally be able to play a game where Supes can take as much punishment as he can deal out. Although he can still be harmed, I suppose they HAD to give him a health bar; it wouldn’t do to have one invincible character. 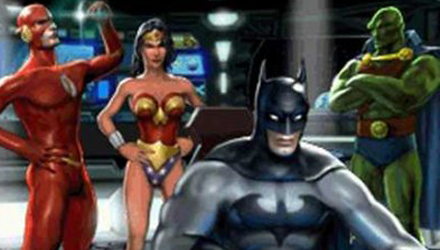 Looks like Wonder Woman picked Flash as her night's entertainment...

Each level puts you in control of two Justice League members. At first they are chosen for you, allowing you to play with all of them over the course of the first few levels. After that, you get to put your own pairs together and this is where it gets fun. Playing on your own, you can switch between the two heroes at will and once you start to figure out their strengths and weaknesses you can build solid partnerships. One boss requires both speed and power, so I put Batman and Flash together. I use Flash to zip around chipping away at the bosses health until he’s stunned, then storm in with Batman using his Dark Knight special combo and it’s job done. It’s also fun to see Batman fighting alongside Wonder Woman or Flash teaming up with Martian Manhunter. Much ado has been made about the relationship between Superman and Batman, not least in Frank Millers comic The Dark Knight Returns but other comic superhero match-ups are rare and special occurrences. Not so in JLH.

Another plus point is the upgrade system. Each successful fight earns you experience, which levels you up. Each new level gives you a few upgrade points to play with, allowing you to power up your attributes or powers, or even unlock new ones. There is a real progression throughout the game and you get the feeling that you’re slowly but confidently building up your team to face the final challenge. Boosts can also be applied to any upgradable thing to give it that extra sparkle. Duration boosts will make stuns last longer or area-of-effect powers go further. Strength boosts, outside of their obvious application, will make health last longer and powers use less energy. It’s intuitive stuff and while it is a little overcomplicated for such a simple game, it’s nice to have the option.

Getting actors to play comic book characters has always been difficult. When an artist designs a character, it’s unlikely that they have a specific actor in mind. Robert Rodriguez managed it with Sin City and Superman has usually been well cast but Batman has had some horrific hiccups (George Clooney is NOT a Batman) and DareDevil got the worst of it; Ben bloody Affleck. It’s fortunate then, that Snowblind seem to have made all the right choices in JLH’s casting. The ever-present legend that is Ron Pearlman does a great turn as Batman, with the rest of the cast filled out with relative unknowns and minor actors. Yet every one is suited to the role and no voice sounds out of place coming out of the characters’ mouths.

The graphics are also very nice for pre-360 times. Gameplay looks are passable, with nice effects and a good level of polygonal rendering. There are jagged edges here and there and when compared to the eye-watering visuals of today’s games it’s primitive but for the time it’s brilliant and still stands up today. The FMVs (remember those?) are lush, showing off what I expect is the full video rendering capability of the old black box.

Nicks and Scratches
Even though I’ve just praised every aspect of Justice League Heroes, there are some little issues I have to mention. The combat, while varied, is a tad repetitive. It’s the same bashing baddies and pulling off specials for the entire game. You barely notice it; the constant switch up of characters, the availability of new powers and the variety of enemies covers it up very well but look deeper and you’ll find a pretty simplistic button basher. 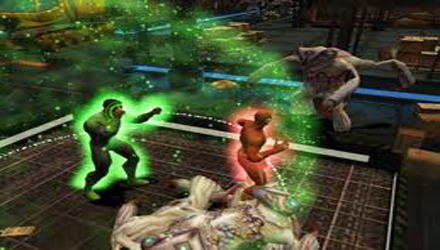 Flash was getting fed up of getting caught in Lantern's 'shower of green sparkles'...

The plot is good for a game of this type but it’s got nothing on the likes of Fable or even Baldurs Gate: Dark Alliance, its spiritual predecessor. It strings together the locations well enough but sometimes feels like it’s making excuses. Case in point; going to Mars. Here’s how I think it went in the story office;

Writer A: “Hey, lets make them go to Mars! That’ll switch up the locations a bit!

Writer B: “Yeah but how do we get them there? There is no logical reason in this plot why they would need to go all the way to Mars.”

Writer A: “Hmmm… Got it! The Key hijacks some nukes and reprograms them to hit Mars, awakening the White Martians!”

Writer B: “White Martians? Aren’t they part of some Martian Manhunter subplot, who’s gonna know what it means? Who’s gonna give a shit about the White Martians rising again?

Writer A: “No-one but so what? By this point the player will have been numbed by the relentless combat and wowed by the fun powers so they won’t care WHY they’re going to Mars, just that they ARE going to Mars!

Writer B: “Oh yeah! How silly of me! Stick it in, we’ll make excuses at the next team meeting…”

Or something like that. Basically the story is nice but doesn’t really matter that much. It carries the characters around and so it does its job well enough.

Verdict
I think I’ve finally done it. With only a few niggles to its name, Justice League Heroes is my first Gold Game! It’s simple yet effective combat, pretty graphics and fantastic depictions of legendary superheroes make it the quintessential comic book game of the last generation. Until someone pulls their finger out and makes an update with more complex combat, better graphics and even cooler superheroes this will do just fine. It transcends the age gap due to its good, honest gameplay and attention to detail.

These days, a game like this would be lazily knocked together from parts of cancelled IPs, like some kind of genetic monstrosity. Games based on comics or films of comics have taken a turn for the worse recently (both Iron Man games and the Hellboy game to name but a few) with the slim exception of The Darkness. I never read the comic but the game was great. So there you have it, the best 3D comic book game available today. The only thing that comes close is X-men Legends 2 and that was limited to just X-men characters and was a little more complicated so JLH just trumps it in my books. Seek it out for a solid weekend of fun that you can visit again and again.

That boss tough with Flash and Wonder Woman? Try it with Batman and Superman this time. Levelled up a power you ended up never using? Pour your experience into something different and see how it changes the game a second time through. The possibilities are endless and so is the fun. I officially declare Justice League Heroes to be a Gold Game and give out my first gold medal!

Finally a success! Next time I’ll be exploring the unknown quantity that is Pariah. Sounds ominous… 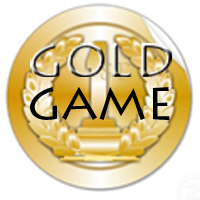