Pac-man is innately simple. Guide the little melon around a blue maze, eating dots and avoiding colourful ghosts until you find a power pellet and get to eat the little bastards. Only they don’t die, they simply go back to base for about two seconds and then revive, still intent to have their way with the Pac one. It’s the biggest kick in the teeth ever and makes the game intense and fraught with stress. Great in its day, Pac-man is now about as old as video games get and doesn’t really cut the mustard with today’s HD-ready, COD generation.

So, how to reboot the ancient legend for the new kids? Make him a platform star, it seems. Pac-man World 3 is the third in the series of Pac-platformers, taking the jolly yellow ball into the 21st century with 3D-ness, enemies you can actually kill and fantasy worlds of bizarre kinds. Not being a massive Pac-man fan and only having played a demo of World 2, I wasn’t exactly brimming with glee when I got this one through the post, but I was in for a surprise. Just not the one I expected…

‘Wakka, wakka!’ of course…
Right, bottom line. Pac-man World 3 has only two things in common with the original source material; Pac-man and ghosts. Everything else is new, imagined around the characters. The story is nothing to shout about but here goes. It’s Pac-man’s birthday and Mrs Pac-man has made him a cake. He’s just about to blow out the candles when he’s teleported to a nearby tree. Confused, he zips around at random for a bit before disappearing completely. It’s then we find out that Orson, one of the ghosts, has nicked Pac-man to force him to save the world on his birthday, the callous bastard. Ever the irritating, cheery optimist, Pac-man puts a positive on it and sets off to complete his task. Cue the weirdest platformer I’ve played in a long time and by far the most strained story I’ve had the displeasure to sit through since… Kane and Lynch. Oh yeah, it’s that bad.

The big problem here is, story parts are relegated to annoying sweeping camera moves and boring mid shots of Pac-man talking without moving his mouth. Most of the other characters are either identikit bad guys (possibly an attempt at irony that totally misses its mark) and ghosts. Each one has a personality, sure, but they’re so stereotypical that they grate almost instantly. The pink ghost is called Pinky and she’s a girly girl, but she’s got attitude! The red one is the tough, fighting ghost, so he sounds like the bastard child of Rocky Balboa and Michael Corleone.

It’s impossible to endear yourself to any of the characters, least of all Pac-man himself. Namco decided to give him a cheese-grater, cookie-cutter, sugar sweet American drawl making him sound like a reject from the Goonies. Every time he opens his triangular mouth I cringe and wince in anticipation of the next gloriously bad anecdote or dumb optimistic quip. He is the thickest character I’ve had the displeasure of controlling in a long time. At least Duke Nukem knows where he stands when it comes to women; Pac-man acts like a five year old thrust into this mad, violent and altogether inconvenient adventure. 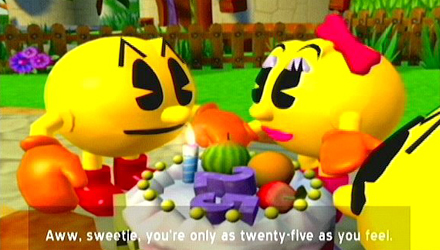 This is one of the better quips...

Yeah, Pac-man is a badass. His attacks consist of brutal monkey punching and bouncing on his foes like a radioactive basketball. No blood of course, but there might as well be. He also has a dash move, which is used for getting up steep hills and activating spin pads. Try using it to hit enemies and you’ll more than likely end up in harms way. The puzzles consist of hitting the right switch, finding coloured crystals to activate airborne lines of pellets and recovering ancient triangles to open equally ancient doors. It’s basic stuff, but is solid enough. Overall the game is actually pretty fun. Running around smacking weird, lizard things until they pop, munching pellets and platfoming about. It’s nothing special but it works well enough to carry the game so far. The only thing is, after a few hours of play, a niggling feeling started to creep into my mind and I quickly came to a conclusion; Pac-man World 3 might as well be Adventure World 3.

Adventure-man…
Pac-man has sweet FA to do with this game. It feels like a standard platform adventure with a Pac-skin. You can imagine anything in place of the yellow hero. I imagined a little cartoony boy, sort of like a 15 year old Prince of Persia, rollicking around with a sabre killing goblins, but you can think up whatever you want. The control and execution is so simple, it could fit any story, any character, any situation. In fact, it would probably be more enjoyable if it was a totally new IP, free from the shackles of Pac-man. That’s the issue here; Pac-stuff seems crow-barred in instead of lovingly adhered to. There is no need for this game to be Pac-man, except that it sells. If this would’ve been, I don’t know, Crystal Land 3, no-one would have bought it. People would think ‘Oh, another mediocre yet strangely enjoyable platformer? Screw that, I want guns and gore!’ and pass it over. Stapling Pac-man to it made people pay attention, and hence the series had three reasonably successful games rather than one big flop. 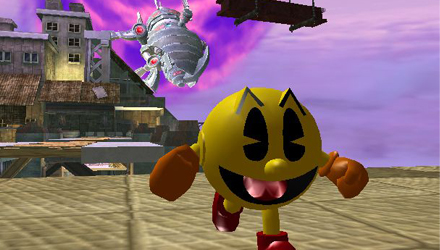 That inane grin is plastered on his face throughout the entire bloody game...

The Verdict
So in conclusion, Pac-man World 3 is a bit of fun, nothing more. It won’t change your life, it won’t take your breath away. It might make you smile, if you like bad jokes and miss-aimed irony, but chances are you’ll finish it in a few hours and feel vaguely accomplished. Maybe it gave a little group of Namco’s mammoth development team the chance to make a fun, simple and entertaining platformer that would actually sell, happy to take it in the arse and make it a Pac-man title. Maybe it’s all just one big, ill-fated cash-in. Whatever the truth, Pac-man World 3 comes close to gold, but its over-pushed skin and bland storyline prevent it from truly shining. Give it a rent, or pick it up cheap if you fancy a short burst of brain-dead, old-skool platforming.

No joy here then, but I’m starting to enjoy this more. Next time I’ll be questing through Gauntlet: Seven Sorrows…