I think I’m going to cry. Not only because this is likely the most deprived retail game I’ve ever played, but also because I reckon this will be the shortest DFG ever. For the first time, I only spent about five minutes with this game. I wasn’t even going to bother adding it to the DFG annals but I figured I’d better put something up just to warn you guys off even thinking about picking it up, playing it or giving it a second look when you spy it lingering in the bargain bin. Pariah was made in 2005 by Digital Extremes, who went on to make Dark Sector and handle the PS3 version of Bioshock, as well as the multiplayer component of its sequel. It’s hard to believe but it’s true. Here goes…

Is this a joke?
Right from the start Pariah stinks. The plot is mangled through a dodgy opening cut-scene that makes practically no sense, forcing you to extract basic information for yourself, or check Wikipedia, which is what I did. Basically, you’re a soldier in space and your ship crashes while transporting a woman infected with a deadly virus. She’s in some sort of cyrostasis to stem the infection and prevent a pandemic but of course it smashes when the ship goes down leaving her free to infect the universe. So you’ve got to find her. The opening makes such a big deal of this that you expect it to be the goal of the game. No, it’s just what happens in the first few minutes. You find her and within about two seconds, your tool of a comrade (some no-name muppet that dies about thirty seconds after you meet him) shoots her, splattering her blood all over your perfectly chiselled, identikit marine face.

A short, annoying flashback telling you that the virus is contracted through blood and you reckon you’re pretty much screwed. This is not only one of the most unoriginal and uninteresting stories I’ve ever heard, it’s hindered almost to death by its execution. Was the writer drunk? It’s as if he or she forgot half the important plot elements and ended up sticking them in when they realised “Oh, shit! If the player doesn’t know this RIGHT NOW, the next hour and a half won’t make a scrap of sense!” This sort of ‘plot development’ is a glaring hallmark of a bad writer or a cheap one, which would be no surprise considering the quality of the gameplay. 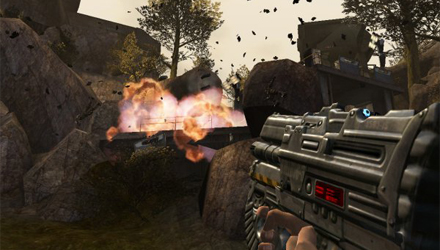 Seriously, the explosions look better in Goldeneye and that was N64...

Practically unplayable
Pariah is apparently a first-person shooter. What that usually means is that the devs would spend most of their time working on the guns, the impacts, the explosions, the death animations. You know, stuff to make the bulk of the game (shooting and running) fun. Not Digital Extremes. I’m not sure what they did spend their time doing but it certainly wasn’t making the game. Probably drinking tea and chatting about the football. First let me tell you about the firearms: Two words; air guns. They feel weak and flimsy, a combined result of sub-standard animation and pathetic sound effects. Not only do they all sound like faster or stronger versions of each other, the actual sounds are so shitty there’s no feeling of impact or empowerment. The whole point of putting guns in games was to make the gamer feel in control of a situation, able to defend themselves and defeat the enemy with aplomb. The guns in Pariah are tantamount to having to use wooden swords in Dragon Age.

The entire control system is a bag of shit. Movement is sluggish and difficult, aiming is even worse. Simple things like zooming in are awkward due to Pariah coming from the period where every FPS was trying to copy Halo and failing miserably. I never understood what was so good about zooming with R3; I practically had a party when someone invented the Left Trigger zoom. Instead of throwing grenades with LT you can whip out some piss poor kind of chainsaw dagger which is infinitely less cool than it sounds and does barely any damage. Getting close enough to use it is nigh on impossible because the enemies do about five times the damage you can cause and kill you before you can get 500 yards away.

While the enemy isn’t stupid in Pariah, they seem to have no set pattern. Some will sit behind rocks until you toddle round and pump them full of lead… sorry, BBs. Others will do the opposite, rounding your cover and getting close enough to see your dandruff before you have a chance to turn around. It’s pathetic programming, something I thought was left behind in PS1 jaunts like Medal of Honour and Quake. Hell, even they had better enemy AI than this. 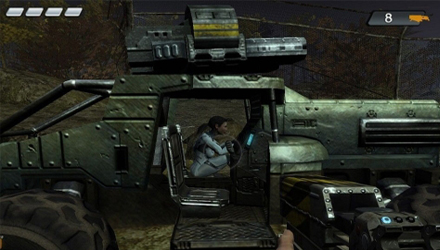 These were honestly the most exciting screenshots I could find...

Verdict
There are so many things wrong with Pariah I simply cannot list them all here. In fact I can’t actual put my finger on anything that Digital Extremes got right. It astounds me that the studio responsible for the aforementioned Bioshock stuff as well as numerous incarnations of Unreal on both PC and consoles could come out with a game so buggy, useless and downright offensive to modern gaming. This game should be struck from the records of history, lest anyone play it and bear witness to the abomination. Treat Pariah like a plague-ridden corpse; stay well away and tell your friends to do the same.

Neil’s Deals Best Price: £2.00 from Amazon (Although I doubt it’s worth even that).

I’m so glad I’ll never have to play that again. Next time we return to Pac-man and his old-school mates in Namco Arcade: 50th Anniversary Edition.