Hands On: MX vs. ATV Supercross

Everyone knows that a sport can only be as good as the drama it creates. I don’t even mean on-the-field drama. We want to see people returning from injury when others said it couldn’t be done. We want someone who was considered ‘down-and-out’ returning stronger than ever. We want to see Rocky Balboa defy odds, not Ivan Drago win because he’s the best.

MX vs. ATV Supercross has its own dramatic story. A phoenix from the flames tale of a publisher going bankrupt (THQ), a developer being disbanded (Rainbow Studios) and a second chance at the big time. The newly formed Big Bang have emerged from the ashes and have got their franchise back. Let’s hope it’s not a false start.When I went to go and play MX vs. ATV Supercross, the first thing I was asked was “Have you played any MX vs. ATV games before?”

The answer was no. Not a normal ‘no’ either. A really giant one. I don’t play racing games normally. They don’t interest me – I find them repetitive to the extreme. For a racing game to keep me interested, they typically need some sort of gimmick. I’m serious. Look – here’s a list of every racing game I’ve giving more than 10 minutes to;

Not the greatest of starts for my one hour preview but I soon realised it wasn’t a problem because this wasn’t a standard racer. 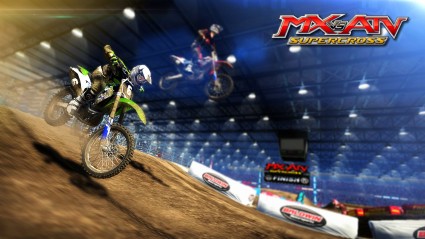 Racing? No, but I’ve played a ton of Civ if that helps…

I was told all about the huge number of licenses the game has under its belt. Real riders, real gear, real bike parts, really interesting, I’m sure, for those that love the sport. Unfortunately, as in love with MX as Big Bang are, this passion was not contagious and this impressive list of credentials was kind of wasted on me. Appreciated, certainly, but ultimately wasted.

However, once I started racing it became clear to see why so many people in the world of Motocross would be keen to sign on with MX vs. ATV: It’s a quality product.

The conceit is simple. It’s a racing game after all and we all know how they work. Where MX vs. ATV Supercross grabbed my attention was in its tracks and controls. You all should have some idea of the fact that Motocross is all about doing laps over terrain that contains tons of jumps, bumps and lumps of dirt.

This means that MX vs. ATV Supercross requires you to not learn a race line but instead approach each launchpad like it’s your last. The speed you approach at and the angle at which you land all require precise manoeuvring of your controller and it made for a racing experience that was much more intense, engaging and full of risk than I’m used to. Hence I enjoyed it a whole lot. 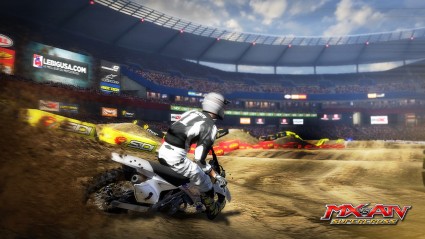 There’s a bit to learn, but it happens quite naturally. No drivers licence needed. *cough* GRAN TURISMO *cough*

On it goes. What starts as a simple ‘go real fast’ racer soon evolves into something that has much more finesse to it than first meets the eye. Best of all, it seemed entirely organic the way you quite quickly pick up and start to use these new mechanics. By the end of my play session I was ‘pre-loading’ jumps, popping my clutch to make amends for poor landings and angling my rider into corners and land ramps. I was doing it all – it left me unable to talk to people in the room as my limited brain power can only do so much at any one time – but that’s not a bad thing. I think they call it ‘immersion’.

All of this fantastic racing owes a lot to the track design. Big Bang have an ex-professional Motocross rider in their ranks and it shows most in some of the race courses. I only got to try four different arenas, but they all seem to focus on different elements of Motocross racing. Some tracks were full of big jumps, some contained tricky corners and others contained harsh ‘rhythm’ sections that challenged you to ride the bumps as smoothly as you can. 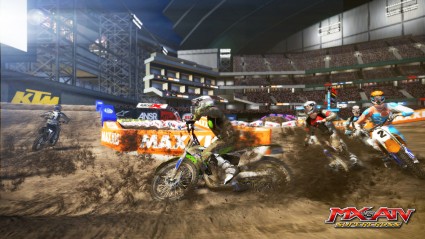 A slight caveat to my positivity is this. It’s only coming out for 360, PS3 and PC (at a later date). This is no doubt due to Big Bang being a pretty small team and they’ve had to focus on what’s important. This also means that the career mode looks slightly lacking. There doesn’t seem to be much of a career to build and will consist of a simple set of races completed one after the other.

So it looks like MX vs ATV Supercross is going to be an extremely enjoyable racing game, even for those that don’t normally partake. It’ll be Big Bang’s first reunion with the MX vs. ATV license and it’s looking like an extremely promising start.

On your marks. Get set. GO!