If you’ve been following my own Eurogamer hands-on impressions thus far, you would be forgiven for believing that I was more than a little down on the entire affair. This was really not the case, I had a total blast. Yes, while there is a little more bile to come in regards to a few other games, this is a positive hands on, though I’m not entirely sure why.

Should you be a regular reader, you’ll already know that I’m not a great fan of the hack n’ slash genre. I would go as far to say that generally they bore me to unparalleled depths of despair. While the majority of those who do love them attending the event flocked immediately to the likes of God of War III and Dante’s Inferno, games where the twenty minutes I spent with them were more than enough for me, I had my head turned by Platinum Games and Sega’s Bayonetta.

If you haven’t been following the development of Hideki Kamiya’s keen-to-get-naked vixen, this is a game that fans of his other creation, Devil May Cry, will absolutely adore. Simon, while watching over my shoulder declared the game as ‘Devil May Cry with tits’, but personally I thought it was much more than that. At first, second and even third glance, the game itself seems as if it’s going to be distinctly Japanese. By that I mean it’s going to be about as random as a bucket of elephants. You only have to look at the synopsis to see that: Bayonetta (who looks like Sarah Palin) has a costume that is made out of her hair, which is also a powerful weapon. The more she attacks, the more naked she gets. Yes, you read that right, as random as I can be; even I couldn’t make this stuff up. However, the randomness doesn’t stop there.

After following a ghostly figure through the open part of the demo, I was confronted by several enemies. After expiring rather quickly while still learning the relatively simple but intuitive controls, I set about my taking my second go. This time the game was an absolute joy to play, linking combo’s and attacks with ease. The animation in the game is extremely tight and the graphics are beautiful, if just not up to the standards of God of War. 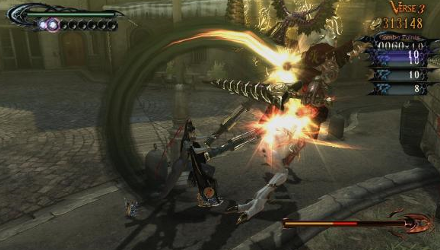 What the hell just happened?!

In the midst of the attacks there were moments I actually had to turn around and confirm with someone else what I had seen. Midway through a combo, our heroine (who might have been on heroin) pulled out a trumpet and shot the enemy with it. During the next combo an iron maiden rose out of the ground and she kicked an enemy into it before it sunk again. Then, and don’t quote me on the specifics of this as I was rather in awe at the time, her hair turned into a portal, she kicked through it, and gigantic foot (made out of hair) came across the screen hitting all the enemies.

During something of a boss-fight, I was prompted for a finishing move. When I activated it she became next to naked with only camera angles sparing her blushes, as her hair transformed into a giant dog that ate the enemy in question. Looking on doesn’t do it justice and would probably put some people off the game, but it plays so well it’s hard not to like it.

As I stepped away from the booth I honestly had absolutely no idea what I had just witnessed, and not one of the onlookers had an answer either. I could say I was dazed or confused, but I knew one thing; I was smiling from ear to ear on account of the sheer enjoyment that I had just experienced. Even at this point I know very little about the story or the setting, I don’t know why she’s capable of the weird stuff she is, but you know what? I don’t actually care; this game is fun, and I want in.