Ladies and gentlemen! Boys and girls! The following is a tale – based entirely on fact – of a man, an expo and a game. Gasp as poor public transport is overcome! Shudder as people giving out ‘free hugs’ are avoided! Cheer for the hero of the piece as he gets his hands on Foul Play!

What I’m trying to say is that I got to play Foul Play at MCM Expo after messing about with the DLR for too long.

To justify my strange tone of voice at the beginning of the piece, I suppose I should explain that Foul Play takes place in ‘Ye Olde England’. It appears that the Victorian-era ‘Demon hunter’ called Barron Dashforth has grown tired of, well, demon hunting and has decided his stories (all of which are true!) deserve to be shared with the people.

Did he write a book? Did he make a silent movie? No. He makes a play, full of action, combos and a supporting-cast of questionably talented actors wearing equally questionable costumes. You may already have guessed, this game doesn’t take itself seriously, though it’s seriously fun to play. 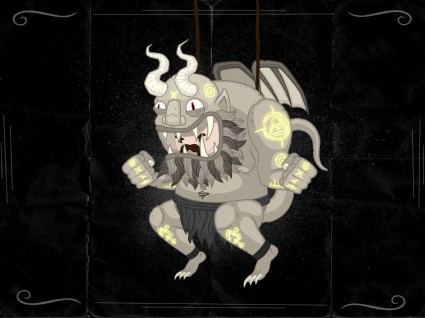 Definitely a real demon. Not a man in a costume. Nope.

I’m going to get the Castle Crashers comparison out of the way early. I’m going to do it now in fact, as the game is as fluid, fun and plays similarly to Castle Crashers. This is not a slight on Foul Play, as it brings enough of its own charm, style and character to the table to ensure it avoids being classified as a ‘me too’.

The screenshots hopefully do justice to the character design on show, as they’re all great to look at and clearly stick with the ‘low-budget theatre production’ aesthetic that runs throughout. You can’t help but laugh at the fact you can see that the ‘squid-monsters’ you’re fighting are nothing more than under-paid actors in poorly made costumes. What these screens don’t do justice to is the animation and the vibrancy of the scenery. 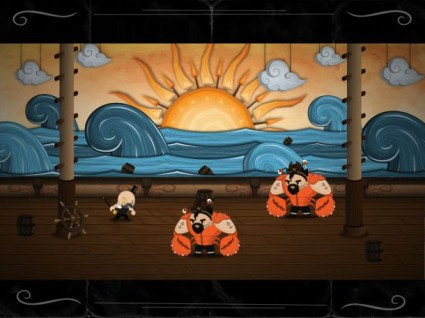 Imagine this but moving in a rather nice way.

The scenery needing a special mention as throughout each act, the level will reveal itself as if a hundred stagehands are at work. What was once a cutout of a sand dune spins around to look like a tomb’s interior and lights are shone onto the floor giving you your queue of where to stand as props fall into place around you. You’re never sure what the stage will turn into next but rest assured, it’ll look great.

Everything moves brilliantly well, with the enemies having a fluidity to their animation which helps ensure combat stays in full flow. Speaking of combat, you’ll find yourself comfortable with the horizontal and vertical attack system in place here. XXY combos will see you launching enemies into the air, whilst a counter attack system, complete with wavy ‘danger lines’ appearing above an enemy’s head, will prompt you when to push the B button. A sees you jumping about with RT allowing you to flip out of trouble. Basic and instantly recognisable, the combat system will reward you for flawless combos and the paying customers will appreciate it also.

You didn’t forget that this is a stage show, did you? With the crowd cheering you on and applauding (even Mexican Wave-ing) your exploits on stage, it’s always a nice reward to see the audience throw their hats into the air as you pull of a 50 hit combo. Most bully! 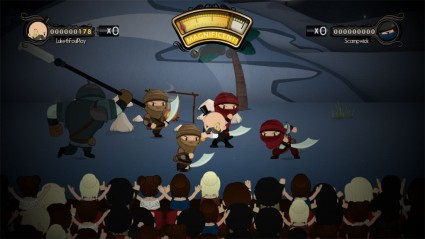 And the crowd go wild!

You won’t be having the crowd’s affections all to yourself though. Foul Play contains a co-op mode where one of you takes charge of Scampwick (who is naturally a Cockney chimney-sweeper). The two characters play identically, so there’ll be no fighting over who gets to play as who. In future versions there’ll be moves where the two team-up on a single enemy, though I didn’t see any evidence of this with my time playing the game. Perhaps my co-op buddy wasn’t good enough You don’t think I wasn’t good enough, do you?

What struck me is how much fun I had watching the game being played. Whilst I took a step back from the action, I was able to let my eyes wander around the screen more often. I picked up visual gags of stagehands that were fixing scenery, actors that crawled off stage once they’d been ‘killed’ and other mishaps occurring throughout the show.

Another aspect of the fun I had with the game has to do with its writing. Seriously, I read text off a screen and laughed. Barron Dashworth and his companion Scampwick share dialogue between them revealing the true art of their fighting technique. “Remember what I taught you” the Barron instructs. “Aim for the crotch, sir?” Scampwick replies. Another standout moment was when a ‘zombie’ forgets his line, whereupon a stagehand comes on, and whispers into the actor’s ear. After he wanders off stage, safe in the knowledge that the show can go on, the thespian shouts “DIE!”. 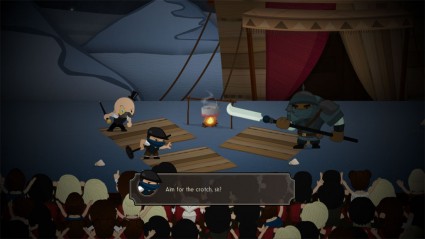 This title’s looking great and playing just as well. There’s promise of a wide variety in levels, with concept art suggesting pirates, werewolves, demons and vampires (‘Notferatu’ being the leader) so I’m very much looking forward to getting my hands on the finished product. Scheduled for launch in the first quarter of 2013 on XBox Live Arcade – Foul Play looks like one to keep on eye on.