As a massive fan of Quantic Dream’s previous work with Fahrenheit (Indigo Prophecy in the USA), I was understandably excited to hear that their long-hyped new title, Heavy Rain, was to be playable at the Eurogamer Expo. After falling lucky in the queue thanks to a timely PS3 malfunction, I got to try my hand at two of the scenarios that the game has to offer. Did the demonstration warrant the hype? I’m undecided.

The first Scenario I played was as Scott Shelby, a private-eye hired (but also motivated for personal reasons it seems) to investigate the murders of the ‘Origami killer’. In this sequence he enters a store owned by Hassan, the father of one of the murderer’s recent victims, to ask for some more information. This is the first sample of how the game will play when it comes to dialogue. Hassan is reluctant to give you any information stating that he had already told the police all he knew. When the time comes for Shelby’s responses you are offered different types of approaches, represented by the required responses mapped to the face buttons floating around Shelby’s head.

Taking a different approach to what I’d usually try (meaning generally being a bit of an abrasive tit), I tried to reason with the store owner, which after a couple of attempts turned into a totally thankless task. Control is then taken from me as Shelby asks whether the store sells inhalers, so that his trip wasn’t totally a waste of time. Here I was able to control Shelby freely, sort of; it’s initially a clunky system. To walk around the store you hold the right trigger and the direction you want. When you reach the required section, you are offered a context sensitive prompt to perform an action. In this situation it was to press down. If you have played Fahrenheit previously, much of this will seem very familiar to you. When retrieving his medicinal aid, a young man comes in and attempts to holds up the store. I was given control again. I walked down an aisle in an attempt to sneak up on our young criminal, only to discover that he has spotted me in his peripheral vision. Pointing his gun he told me to put my hands in the air, which I did using L1 and R1.

Time for more talk, and this time I opted for a more aggressive approach. This was deeply unsuccessful and led to a scuffle, played out through what can only be described as quick-time events. I missed a few of my cues, and took a graze to the arm as shots were fired, and the attacker made a run for it. Thankful for my intervention, Hassan decides to give up a box containing an origami model, and some possible leads. Shelby takes the box and exits the store.

What I noticed during this very short segment was that there was very little in terms of actual gameplay, however there are some things worth noting. I could have tried a variety of different tactics to get through this, including different temperaments and different actions. Even walking down a different aisle to reach the robber could have had a different effect on how this scenario panned out. Also what I enjoyed immensely were the visuals. Quantic dream have clearly put a lot of effort into making their characters more humanistic, and it shows. Everything from facial expressions to the general animation is of such an unprecedented quality that I have to admit I found it hard to find fault. 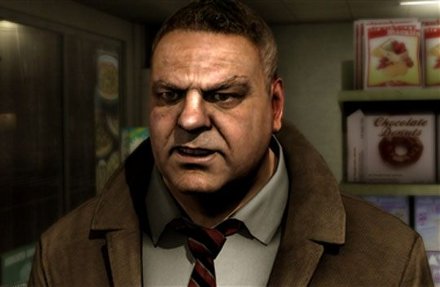 The second scenario follows FBI agent Norman Jayden, who is looking for clues at a scrap yard. After exiting his car (again after using context based analogue stick movements) and snooping around a scrap yard, he is confronted by a muscle-bound employee. After an ‘up-close and personal’ discussion where I chose the path of questioning, I was free to investigate a garage. I was given an option immediately floating next to Jayden’s head. By moving the analogue stick from right to up in a quarter circle motion, he put on some sunglasses. These are no ordinary sunglasses, when pressing R1, a wave of the hand scans a circle around him and highlights any evidence, such as fingerprints or tyre tracks; think futuristic CSI. To take a closer look at these clues, again the player is required to perform context sensitive motions. After investigating all that I could, when trying to leave I was confronted again by a clearly agitated and self-admittedly guilty employee at gun point and led into the back. Here I shamefully missed every QTE event to get out of the situation and was eventually executed gangland stylee, and thus ended my demo. Again, watching other folk on their play had entirely different scenario’s so the replay value will come from seeing what you could have done.

So, is it the big game Sony wants it to be? I’m not convinced. The use of quick-time events gets a hefty slating unless used uniquely in every other game, and I’m not sure how the growing number of folks against that as a gameplay mechanic will handle a title packed full of it. The game also goes at an incredibly slow pace and plays a little clumsily. In all honesty it handles like a point and click game or an interactive movie, just like Fahrenheit before it. Myself? I’m still intrigued; the story seems amazing, visually even at this stage the game looks stunning, and the characterisation looks as if it could be like nothing else we’ve seen before. That said, my anticipation for this game has now been downgraded from pant-wetting excitement to cautious optimism.