One of the biggest surprises when me and Neil attended last years prestigious Golden Joystick awards was bumping into and chatting to comedian, writer, and all round nice guy Danny Wallace. Both being huge fans of his work it was a pleasure getting to spend some time with the man in question on the night, and while it’s been a long time coming, we finally got our interview with the writer of Yes Man. Who has more recently, and more importantly to gamers, had a starring role in Ubisoft’s Assassins Creed 2.

Q. Hi Danny, thanks for taking time out of your schedule to do this interview, I’m a big fan of your work. How do we find you this rainy winter day?

“I am very well, thank you, and thank you for asking. You have obviously been very well brought up, and I would love to respond in kind and ask you how you are doing on this rainy winter day but I think in the interests of brevity and of starting this interview in the most concise and appropriate way, I will on this occasion, not bother.”

Q. I’m now forever going to refer to you as ‘Danny Wallace: Friend of This Is My Joystick?’. Is that ok with you? You could even get your name changed by deedpoll…

“I could do that. Just as I could have it tattooed onto a cat and marry it. Both are unlikely and one is illegal.”

Q. Me and Neil bumped into you at the Golden Joystick Awards, I’ve never really thought you synonymous with the games industry, are you much of a gamer in your private life?

“Yes sir, I am. I’m an Xboxer, by which I mean I own an Xbox, not that I am a former professional fighter. I also enjoy my PS3 and get a kick out of Wii-ing, which is the only word in the English language, I have discovered, to have more i’s in a row than skiing. Plus, I used to work on games magazines as a teenager, like Sega Power, Total!, SuperPlay, GamesMaster and a ton of others. It’s in my blood. I had a test.”

Q. Was this your first time at the Golden Joystick Awards or have you been before?

Q. How did you find the event this year?

“Taxi. HAHAHAHAHA! No, but seriously, they sent a taxi.” 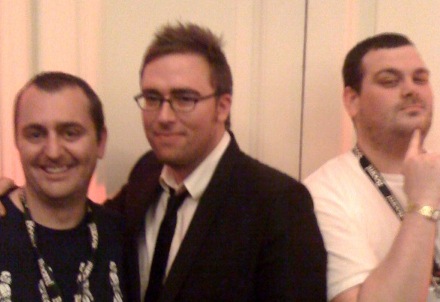 Danny and the TIMJ boys. Arrived by Taxi apparently.

Q. Did you agree with many of the winners? A lot of us in the digital media room agreed with about 20-30% of the eventual winners…

“Is that right? Well, to be honest, what I think we need to remember is that they were *all* winners in my eyes.

Although not in the eyes of the judges, but I agreed with a lot of the choices. Mainly because I was sitting next to the organisers and I didn’t want them to take my dessert away.”

Q. What would you say the highlight of the event was? It was meeting me wasn’t it? It’s ok, you can admit it, and I’m completely modest…

Q. With your background in media, have you ever thought about pitching a grown-up games program to any TV execs?

“I’ve not thought about it seriously, but the amount of people who asked me that on the day made me think about it a little harder. There’s a videogame-based idea (not a games show, more an adventure) that I’d like to do this year if I have time. I think a games review/news show really should be done.”

Q. You are making your video game debut as a voice actor in the upcoming Assassins Creed 2, how did that come about?

“I was at the videogame BAFTA’s and a very nice man who reads my stuff approached me and said he had just the role for me; “could have been written for you!” he said. Then I saw the character breakdown and saw it was for a “lonely, intense, nerdy” man, and I realised I’d probably been subtly insulted in retrospect.”

Q. What can you tell us about the character you play?

“He’s a historian. Shaun Hastings is his name. He’s sarcastic. I’m disturbed to see he is already the subject of much homoerotic fan fiction. I can never look at myself in the same way again.”

Q. How did you find being voice talent? Did you get to meet any of the other voice actors? By that I mean would you be able to ask Kristen Bell out for me?

“Great fun. They let me mess about with the lines and gave me lots of freedom, so I had fun with it, though I didn’t get to meet the others. They just played their lines into my headphones and I pretended I was in the room. Well, I say ‘pretend’. They call it ‘acting’.” 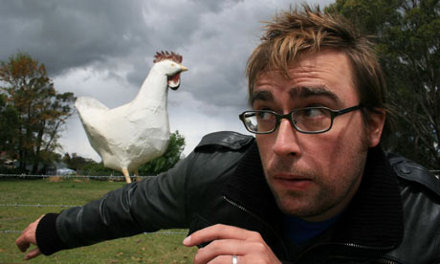 Q. Is voice-acting something you’d like to do again?

Q. Ok, you can’t include Assassins Creed 2 as an answer, what was your game of the year for 2009?

Q. Are you playing anything in particular at the moment?

“Mainly the above right now. Can’t get enough of it. I like the awards you get at the end of online games. Yesterday I got ‘Most Time Spent Crouching’. I’ve added it to my CV.”

“Yes! I’ve a new book out in June. It’s called Awkward Situations for Men. It’s all about the day I met you… Not really, but it’s about… well… it’s in the title. Head for dannywallace.com for more…”