Dan Crowdus is the mastermind behind a new album called ‘The Icarus Kid’ that brings the classic sounds of the Nintendo Entertainment System to the dance floor. Dan abandoned his lifelong aspirations of becoming a video game developer to fully focus on his greater passion; music performance.

Following a move to Seattle, he began playing with bands and DJing house music at nightclubs, which provided a solid foundation to blend these worlds together into a live show that twists and warps familiar themes into entirely new soundscapes.

An endless obsession with software and technology has given birth to a deviously programmed live setup, including full keyboards and a synchronized LED light show that responds to live events.

Upon hearing the album we tracked down Dan to chat more about this fantastic concept.

Q. Where did your love affair with gaming begin?

“My first game system was an Atari 800XL that I got when I was 3. My dad picked up a few hundred pirated games from a friend that kept me busy for years. It was fun to gradually move on to the harder games as I got older and start making my own text games in BASIC.”

Q. How would you describe your music?

“I try to bring together three very different types of music; video game, electronic dance, and orchestral. I’d say most of the songs fall somewhere on a spectrum with unhinged, bleepy chaos on one end and more melodic themes on the other. Above all I’m always trying to have fun when making music and exploring new concepts and ideas.”

Q. Where did the inspiration for this concept originate?

“I’ve always been obsessed with video game music. I made my first NES remix as a fun side project to blow off steam. I had such a great time doing it that I couldn’t resist making another, and another, and another. I had always wanted to put together a live solo act with keyboards and advanced software but never had the right music for it… little did I know that the right music was there all along!”

Q. Which of the following early 8-bit games do you have the fondest memories of? Kid Icarus, Super Mario Bros, Metroid, and Legend of Zelda ?

“Of those, definitely Metroid, although they’re all close except for Kid Icarus (which I just beat for the first time last week!). Zelda had already explored the concept of an open world which I found so entrancing, but it was Metroid that took this concept and really upped the level of immersion. The music definitely played a big factor in making you feel that you were really in this strange, alien world.”

Q. How do you decide what game music to use in your remixes?

“It’s been a combination of the best music that has really stuck in my head over the years and the music that I think would work best for the dance floor. I generally prefer finding hidden gems and underrated level themes over the typical pantheon of classic game music. I’m about to begin work on a remix to levels 7-9 from the original Castlevania, can’t wait to get started!
Also, I’ve been receiving a lot of fan suggestions lately and have discovered some great music that I didn’t even know existed.”

Q. Your work has been compared to Daft Punk, Crystal Castles, and Aphex Twin. Have these artists been huge influences to you?

“Daft Punk and Nobuo Uematsu are my two biggest influences. Daft Punk’s Discovery and my album both take samples from completely different genres and twist and warp it into modern dance music. While Crystal Castles wasn’t much of a direct influence, they did give me hope by paving the way for 8-bit music to enter the mainstream.”

Q. You are set to play with acclaimed orchestral show “Video Games Live”. Many of our UK readers won’t have heard of the much acclaimed show, how would you describe the experience?

“Not for the epileptic. I use an elaborate set-up in the music software Ableton Live to synchronize my light show with the melodies and events, all of which reacts to my MIDI controllers. I play as many keyboard parts as I can live and try to fit in some classical piano as well. Making the show intense and dramatic is very important for me; I want the crowd to feel as if they’re inside a video game, right up to the final boss battle at the end.” 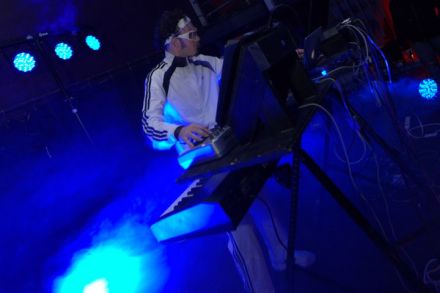 Are there any gamers in the house tonight? Shabba!

Q. What is your personal favourite game soundtrack?

“Final Fantasy IV. Nobuo’s early works sounded more like traditional video game music, although with a much higher degree of flair and mastery. From FFV on his music tended to either go for a classical or a rock sound, depending on the song. FFIV marks the turning point between these eras and I love the combination of the two sounds.”

Q. Do you think non gamers would enjoy your music?

“So far my live shows have been drawing very diverse crowds. Gamers are certainly present, but you don’t have to be a gamer now to have played these games as a kid. When I create my shows I try to put all thoughts about nostalgia aside and ask myself “would this show still rock even if nobody had heard any of the melodies before?”

Q. Do modern gaming soundtracks have the same soul/charm as those of the golden 8-bit era?

“There are lots of great new soundtracks out there these days, but technology has caused game soundtracks to evolve into something more akin to movie scores. The mastery and artistry has certainly risen and we’ve seen some amazing works lately; the immersion level is much higher. What I miss is the simplicity and the focus on melody and harmony instead of instrumentation and audio engineering. With such basic tools to work with, composers had no choice but to create simple, catchy tunes. It’s great to see this concept being revived as a genre with the chiptune scene.”

Q. What games do you most enjoy now?

“I used to game a lot more but these days I spend most of my time on music. This project has definitely caused me to rediscover and play through a lot of NES games, though, and I’ve beaten many for the first time over the past year. I have also been playing DotA online since its inception seven years ago; it’s been fun to watch the game evolve from a casual community mod to a competitive game in its own right”.

Q. And finally who would win in a fight between Sephiroth (Final Fantasy 7) and Alucard (Castlevania)?

“Sephiroth would definitely win this battle. He would lull Alucard to sleep by playing a ridiculously long spell animation involving planets. After that, all it would take is the tried-and-true stake to the heart.”

Both gamers and music lovers alike who are intrigued by this concept can find more information on the album by visiting the website www.theicaruskid.com.

We wish Dan the best of luck and will also be looking out for the “Video Games Live” show when it hits the UK in 2011.