I have never been to the ExCeL in London. In fact, I rarely get down to London at all, so I was more than a bit excited when This Is My Joystick were invited down to the MCM Expo in London this bank holiday weekend to sample some of the latest games, along with several that have not been released yet.

Myself and a friend attended the MCM Expo on Saturday, what I would assume to be the busiest day, and the approach to the centre shortly after standard opening time confirmed that for me as I saw a haze of colour and costumes in the far distance. Thus began a day of character spotting and general madness.

Upon arriving at the ExceL it soon became very apparent that I, dressed in jeans and a t-shirt, was actually the one out-of-place as swarms of anime, manga and video game characters ran past me to get to the exhibition hall. Sharing a space with the likes of an extremely in-character Pyramid Head, the cast of Sonic & Duke Nukem was certainly an experience that will be hard to rival. Things only became stranger as I walked inside the main hall though.

After a quick browse of one corner of the hall, the day was bizarrely kicked off for us when we heard cheering coming from a concealed room behind a long line of cosplay stores. Being the nosy person I am, I had to go and have a look, and to my surprise there was a large wrestling arena, surrounded by various anime characters cheering & shouting. I’m not adverse to a bit of wrestling, and it was great fun to watch, if not slightly random at a gaming/anime convention. Everyone appeared to be having a great time though! 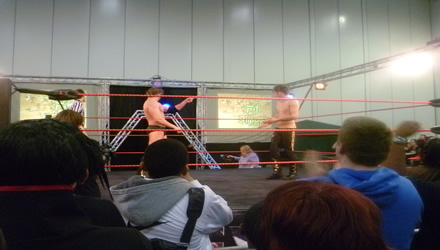 The games section was not small, but was mostly bypassed by most of the attendees as queues of hardcore gamers wound their way through the hall. Of course, I had to get in there and have a bash on as many games as possible, it would have been wrong not to. Unfortunately it was not possible for me to take pictures of some games due to them not being released yet, but that didn’t stop me having a total blast.

Some of the games on show were Zelda; Ocarina of Time on the 3DS, Dead or Alive Dimensions, which I unfortunately did not get to try (I so wanted to see the anti gravity boobs in 3D!), along with Gears 3, F.3.A.R. & Mortal Kombat. Ocarina of Time on the 3DS was a fun trip down memory lane, Link standing out from the scenery like never before, rolling around inside & outside the great Deku tree. Gears 3 & F.3.A.R look very promising from the small glimpses I caught of each, and had huge sections of the hall dedicated to them. Mortal Kombat was great fun, a long line of consoles taken up with gamers challenging each other, and the familiar roar of ‘Finish him!’ booming from each game. 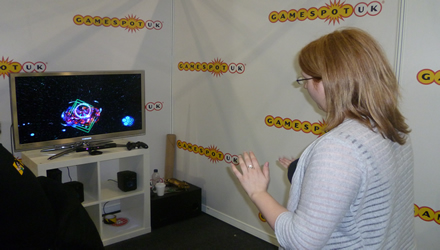 Having the opportunity to play on Child of Eden was an interesting experience, having been a little sceptical about its drug infused visuals and general weirdness, but I was genuinely impressed by the way the Kinect worked with it so well. Combining incredible visuals with shooting elements is a work of genius, and I may even be convinced to buy it for myself to finally make some proper use of the Kinect system collecting dust in my living room. Perhaps not one to play after a drunken night out though; it could cause all sorts of strange dreams!

Sadly, I did not get a chance to attend any of the press panels as I was too busy playing games, mingling and tending to my own geeky urges at the large variety of shops scattered around. However, there were several screens located around the hall streaming trailers for the new Green Lantern, X Men & Johnny English films, along with an assortment of classic anime coming to Blu Ray & DVD collections. The echo of cheering fans could be heard throughout the centre as each panel went under way however, and several corners of the hall were home to signings of various stars.

Sitting outside the Expo gave light to the insanity of some of the attendees. Someone had come along and decided to play some music on the steps, allowing me to witness some of the most bizarre scenes I have ever witnessed in my life. Watching some of your favourite fictional characters busting a move to MC Hammer’s  ‘Can’t Touch This’ was both awesome and utterly disturbing. 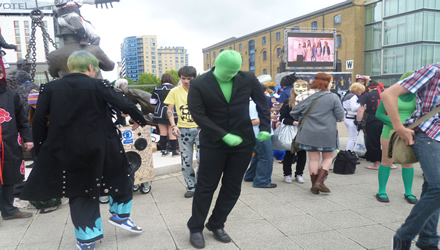 Does he think he's invisible?

Entire sections of the hall were dedicated to card games such as World of Warcraft & Yu-Gi-Oh, along with mats laid out for streaming anime & stages for dancing & cosplay competitions. Live music was played on a main stage outside, allowing me to bear witness to even more dancing game characters, continuing to blur the lines of gaming reality.

Some of the best cosplays of the day were blocks from Minecraft, Companion Cubes, Mortal Kombat’s Scorpion, Sub Zero & Jade and even a lemming! There was also some very impressive Final Fantasy & Kingdom Hearts cosplayers scattered around both inside & outside. I also spent a long time queuing for the cash point and having a random conversation with Ezio Auditore. Only at a convention can you discuss life with a fictional character from Rome. 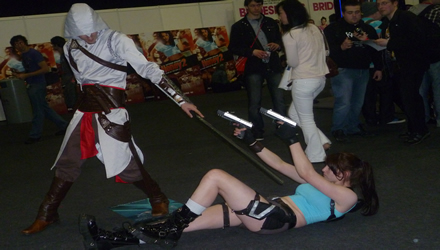 An odd yet interesting scene in the middle of the hall.

All in all, my day out at the MCM Expo was a brilliant one, and after spending six hours trawling in and out of the centre I can honestly say I am exhausted, but cannot wait to go again. There is a bit of something for everyone and even though it is heavily anime centric, just the spectacle of the event will keep you amused even if you’re not a massive fan of the culture.

For more pictures of my day at the MCM, please check out our Flickr stream.