It’s been a long time since I last played a Pokemon game. After the release of Pokemon Gold back in 2000, I was just about to start secondary school and unfortunately, Pokemon just wasn’t that cool any more. So, it left my life for a whole eleven years as I tried to ‘fit in’ with a silenced love of games and all things geeky.

Nothing could hold my excitement when I heard about Pokemon Black & White though. The need to reminisce over my childhood became overwhelming to the point of me charging up my old Nintendo handhelds for a quick bash on some old favourites.

Nintendo have finally run out of colours, so now it’s the turn of shades. I bought Pokemon Black, which had a special location called Black City, in comparison to the secret location of White Forest featured in Pokémon White. As with all Pokémon games, each version also has its own specific creatures to capture. These can only be traded between players to complete their Pokedex’s but this is an awful lot easier with the world of Wi-Fi now.

At the start of your journey you will choose your starter Pokemon from a selection of three, which all have basic elemental traits. The catch this time is that you will also have two friends who do the same, and these friends will follow you through the Unova region fighting alongside you, but also testing your skills from time to time. 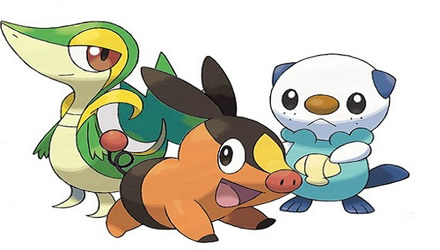 As you start to progress through the story, the main threat to the Unova region makes itself clear. A rebel group named Team Plasma are trying to encourage trainers and locals to give up their Pokemon in the name of freedom. Naturally their means of doing this are less than peaceful and you will end up fighting Team Plasma perhaps a little more than you would actually like to. A mysterious green haired man also follows both you and Team Plasma around like a power crazy lunatic, and acts as your main rival. Complete with some cryptic scripting to keep you wondering what the hell is actually going on.

I have to jump through a cannon? Are you serious?
One thing that impressed me a lot with this latest iteration was the way that earning Gym badges worked. It is still mostly the same process; you fight through some lackeys employed by the gym leaders in order to test your skills, and then you fight the owner of each gym for their respective badge. However, you don’t just walk through a tall building in a straight line and fight your way through. Each gym has its own unique charm, presenting you with a puzzle to reach the end. This could be a switch flipping puzzle, or perhaps one that involves firing your trainer in and out of harmless cannons. It’s a very simple but most welcome spin on things for me, removing some of the monotonous grinding from previous games. 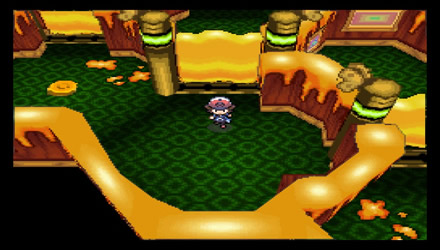 This may look like some sort of royal beehive, but it's actually a gym!

Multi Pokémon battles mean that there will be times you can use up to three Pokemon in a battle at once, and this requires a great amount of skill as you and your opponent can rotate your Pokemon to the left or to the right for a tactical advantage. It can be tough to nail the perfect team for such a battle, so sometimes it’s just easier to go for luck. If one of your team is falling behind due to a weakness, then rotate the team around as only the member at the front will be attacked. This is a tactical step forwards for Pokemon, and perhaps one for long time fans to master.

You also have the option of fighting alongside fellow NPC trainers, allocating a Pokemon to each trainer on the battle field. These battles can be very fun and do involve a small amount of tactical thought depending upon your opponent. Unfortunately you cannot control the actions of the other players’ Pokemon, but this does make battles more heated as you wait in suspense to see what your partner will do to aid you.

To veterans of the series, there isn’t that much new here, but that to me is the glory of Pokemon. While there may be new online compatibility and some new gadgets to play around with, gameplay remains much the same as it was in the very beginning, which is a very nice trip down memory lane, as nice as it would have been to see something a little new. 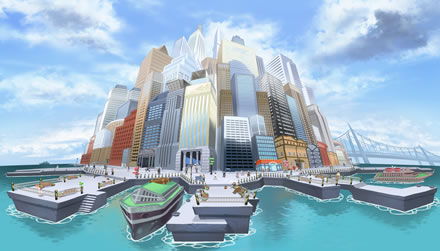 Castelia City, one of the busiest locations in the Unova region.

The seasons in Pokemon change with each passing month in the real world, adding various perks or downsides to different Pokemon in battle. For example, if the season is Spring, there will more than likely be a few showers which will be a hindrance to any fire type Pokemon, whereas this will aid those with water types in their parties.

One thing I will mention is the difficulty curve, which seemed to bounce all over the place sometimes. I would end up beating a painfully easy Gym leader in a matter of seconds, and as soon as I stepped into a new region I was annihilated by regular trainers who just plain had it in for me. The same happened when I came to tackle the Elite Four, leaving my Pokemon horrendously battered and bruised whereas I had previously fought my way to them without a single fainted Pokemon. Unless you completely master the elemental pros and cons of each Pokemon, then you may find yourself back tracking, or even taking part in a little grinding cheat just to finish the game.

It’s all very pretty, but isn’t this the same as 10 years ago, just with colour?
The DS provides nothing short of stunning in terms of visuals for Pokémon Black. Each town is beautifully coloured and individually crafted, some feeling quite quaint and others littered with looming skyscrapers and bustling streets. However, the style of Pokemon has not really evolved since the very first game. There is not really that much that can be done with the style, as it is a major trademark, but it would be nice to see a slight change just to bring the franchise more up to date. 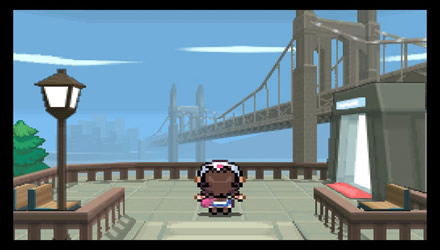 A close up of pixels before panning out to 3D glory.

You want my Pokemon to wear what?!
Whilst they may sound dated to some new players, the sound effects and music that pump out of the DS speaker are music to my ears, taking me back to my childhood. Even the sound of the Pokecenter reviving my fallen comrades is enough to almost bring a tear to my eye.

The most entertaining use of sound in Pokemon comes when you find the Pokemon Musical theatre. That’s right folks; you can enlist your Pokemon to play a part in their very own musical alongside other Pokemon whose trainers have a slightly sick fantasy for dressing up their Pokemon and forcing them to dance on stage. It can be very amusing and the songs are very retro, but after a few viewings of dancing Pokemon, you can’t help but feel it’s all a bit wrong if you’re not under the age of 12.

I challenge you to a friendly duel… on a train
I remember the days when trading Pokemon involved a lot of wires and extreme close proximity. This is all a thing of the past however with Wi-Fi connectivity and connection even when on standby, removing wires completely and allowing players to trade Pokemon even halfway around the world.

One location, Battle Subway, located in Nimbasa City will allow you to hop on various trains and compete with or against other players in a variety of different battle types. All Pokemon are allocated the same level to make things fair, and a prize is given out for those who earn the most battle points for making their way furthest down the train carriages. If you do not have access to Wi-Fi, or would just like to play on your own then this is possible, but is no doubt more fun with another human player as opposed to an NPC.

Black City along with White Forest are key locations for Wi-Fi capabilities to really shine, but this also meant that because I found it hard to get to Black City in time, and have not had the chance to Wi-Fi with someone who owns Pokemon White, that my Black City is completely empty. This was really disappointing for me as this was the whole reason I chose Black over White. I wanted the hustle and bustle that Black City promised me, but all I found was a dead city with about three trainers in it. 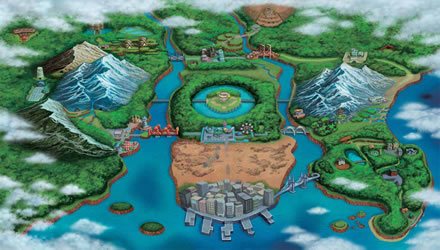 The Unova region is huge, giving you hours of play time

Do I really have to catch all of them?
When you reach the finale of Pokemon Black/White in terms of the story, it’s good to note that it does not signal the end of your journey through the Unova Region. There are many more things for you to do, including battling the Elite Four over and over until you gain ultimate bragging rights, and many more locations to unlock and explore for bonus content. Some old faces pop up as well, so you can relive your original Pokemon experiences on the DS.

While Pokémon Black/White can still be a little patronising to adults with the likes of Pokémon musicals and childlike morals, for those who loved this series back when it first came out will enjoy a joyful trip down memory lane, perhaps with a little more shouting and swearing when things start to get a little too frustrating.