This is my final article about Game Horizon and I’ve saved the best ‘till last. Peter Molyneux’s views on Milo, Kinect, being innovative and my discussion with Ian Livingstone on gentlemen’s clubs and the slow death of the author caused by the rise of casual games…

Peter Molyenux needs little introduction to anyone who knows anything about Games. He has been involved in games from the beginning and shared some insights on his most successful titles. Peter has always been at the forefront of experimentation: Syndicate, Black and White and the original Fable have all garnered awards for their originality but are not what I would call ‘complete’ games. I’ve played a little with all of them, got the gist of what they were trying to do and left them uncompleted. He deserves all he has been awarded (most recently the  Chevalier de l’Ordre des Arts et des Lettres by the French government in March 2007 and an OBE) and if you were out to pigeon hole him, you would call him one of the most experimental mainstream game producers in the UK.

However, this has not meant that he is been unable to gain commercial as well as critical success. In fact, most of this talk was focused on one of his highly successful titles; ‘Theme Park’. Theme Park was produced in 1995 and sold 15 million copies across all formats. In hindsight, it was a no-brainer, but at the time Molyneux explained how hard it was to sell such an innovative idea, especially if you were in the position of creating an already successful game.

Theme Park followed ‘Syndicate’; an isometric perspective game where you controlled a mob whom you could send on mob like missions (assassinations and such like). Obviously, the development team in Bullfrog enjoyed creating it, the publishers were happy with a product that made them money and the players loved it. Helped in no small part, according to Molyneux, by the inclusion of the first ever minigun in a game and the satisfying sound effect they created to go with it.

What the public, publisher and the development team wanted was another game in the same vein with a minigun. There were cross platform conversions and sequels of course, but Molyneux wanted instead to create a Theme Park management game. In his own words “Everyone hated it”.

If you have never played Theme Park before, well it is about creating a profitable and satisfying Theme park from the point of view of the customers. There is no killing, no mobs, but there is a rollercoaster and ice cream. People from the publisher came to visit him and tried to get him to can the game. When Molyneux went to the US, they tried to get him to close down production. Even the development team itself went on strike against the game, one of their demands was to have a sniper option, where the player could sit on the top of high rides and pick off the customers in the theme park.

We know that the game was a runaway success and inspired many sequels. I would hazard a guess that there is a strong link between the absence of dark motives and the game’s success and perhaps the success of the majority of casual games today.

This quest for a ‘universal appeal’ with its attendant financial success, is a clear goal for Fable 3; they are aiming for more than five million copies. Molyneux spoke about how the game was evolving from an RPG to a more action based game an how he had employed many women at a senior level in the development of the game in order to make it appeal more to female gamers.

There were some other interesting features in Fable 3 he was going to try out; like ‘cloud’ based in-game shops. Each shop in the game world would be connected to remote servers cogniscent of the players location, so Lionhead could control what items were released in what geography and create regional versions of the game. He is also taking Fable down the episodic gameplay route which makes clear sense from a profitable point of view.

Peter has also been heavily involved in Kinect with the ‘Milo’ project (which is certainly not just a demo, Molyneux was keen to point out) and will shortly do a TED talk on it. Kinect, he believes will create a sense of wonder that is otherwise missing from games and that people want. I spoke to him about it afterwards and about the problems of creating emotional involvement in a game (which normally takes a long time) and the fatigue caused by standing up; hence any controller that requires the player to stand up to control it will be unable to build emotional depth (but is perfect for casual games). To my surprise he agreed with my ‘perceptive comment’ and said that is why, in the TED talk he will give, he will be sitting down. You heard it here first folks! 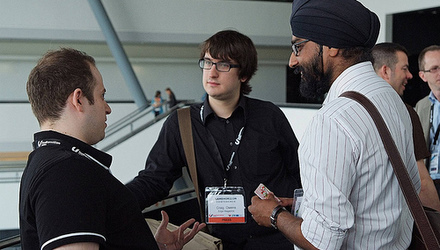 Me giving the journalist from edge some tips 😉

Ian Livingstone shared some time with me at the end. I must confess, I am a huge fan of Livingstone, having read all his Fighting Fantasy books he co-authored with Steve Jackson. Check out the Wikipedia page for his history. In short, he’s also been there from the beginning and is now life President of EIDOS.

As a published author, I spoke to him about the recent growth in casual games. Most casual games feature little or no plot (beyond that which is in the player’s head) and are about the satisfaction gained from the grind of accumulating virtual goods of statistics. I contrasted this with the ‘communion with the author’ that one experiences in a book or a narrative driven game. Reading one of his game books, I chose from one of his storylines, go to an end he had foreseen and had embellished the details in my own mind. If casual games were to become the bread and butter of the game industry, where was the role of the author/director? He stated that the game creator was now the creator of the game space where the narrative would have room to develop. Does this change the role of director into a ‘producer’?

He said that he hoped the author would not die out or else he would be out of work. I do feel that the momentum of the game industry is moving away as it is far more profitable to produce these kinds of games compared to the triple A titles we have all got used to.

He also spoke of consumers now viewing games as an experience that they were buying rather than a product. Ergo, when one goes skydiving one does not believe one owns the plane at the end of the experience. For new players that might be the case, but for those of us who rest our games cases on our bookshelves next to books, I do not think the argument is yet made.

Ian Livingstone runs, what could be called a little gentlemen’s club with Steve Jackson and Peter Molyneux. Where they meet regularly and play board games with each other. Ian then produces a little newsletter which is circulated to the players. To a modern gamer, this sounds delightfully archaic and ‘olde worlde’; would you write a newsletter about a Left 4 Dead or Bomberman Ultra session? In another way, it speaks of a gaming world that we have kind of left behind. In Dungeons and Dragons, the Games Master would use his imagination to bring the game alive and there would be a strong human element to the whole game, winning the game would be about surpassing the imagination of the GM. Now, with computer gamemasters there is little of that concept of besting your friend’s imagination. Perhaps we are missing out on something magical through not doing this anymore, or perhaps it is an allusion too far?

I gave Ian Livingstone a strong handshake as he told me that another Fighting Fantasy Game in the works (not yet officially announced), and I can tell you, for me, it was the best news of the conference and I looked forward to buying his book, reading it and putting it on my bookshelf with all my other titles.