The Vent: Much Ado About Fuck-All

Anyone who’s been keeping up with Jack Whitehall’s semi-decent new BBC3 comedy ‘Bad Education’ will know that the latest episode focused on a game craze sweeping the school Whitehall’s character attempts to teach at. The offending title, dubbed something like ‘Ninja SS Zombie Killer’, was never directly shown but was depicted as a game where you play a ninja going around killing off Nazi prostitutes. The kids were so obsessed with it that they began kung-fu-kicking each other around at lunchtime and wearing ninja masks around the school.

There were also some pretty strong references to games addiction, with even the most staunch detractor of the game finally succumbing to its charms and becoming the most hooked out of them all. So what does this say about how our beloved medium is still portrayed in the mainstream? Far from being accepted as the legitimate entertainment force we all know it to be, can it really be that intelligent, modern and worldly writers are still banding about the same prejudices?

Of course not. You thought this was going to be another piece on how games are being misrepresented in the media and how we all need to dedicate our lives to changing that didn’t you? Well it’s not. In fact, this weeks little vexation is aimed squarely at the bed-wetters who can’t spot a parody amongst the dwindling attacks.

I like Jack Whitehall as a comedian and while his skill as an actor leaves something to be desired, he does ok in Bad Education. His supporting cast are great and the storylines are enough to raise a chuckle most of the time. The episode in question was so obviously focused on dissing school crazes, the over-reaction of faculty to violent video-games and the misconception that everyone who even so much as picks up a controller is automatically an addict.

Yet despite all this blatant parody, I can guarantee you there are people out there currently wringing their hands in anxiety. In the same way as there are people who wince every time South Park makes another joke at Timmy’s expense and those who get annoyed whenever a black comedian makes fun of their own culture, there are people who feel a compulsive need to make a fuss every time someone has a poke at video-games. 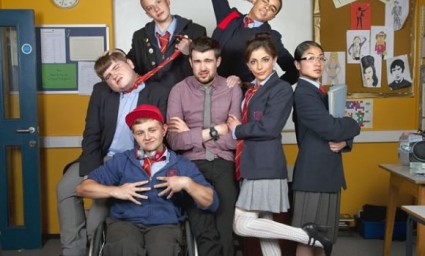 Whithall and his young cast

Obviously there are numerous people and organisations who are vehemently opposed to games, whether it’s just certain types or genres, or the entire medium. There are even more people who see no benefit in them and who class them as ‘worse than television’ as if TV is that bad in the first place. These people aren’t going away and will likely never fuck off and leave us alone.

We’re winning though; developers continue to push the boundaries of storytelling, interactivity and entertainment while detractors like Alan Titchmarsh continue to get older and repeat their own rhetoric as, once again, the tulips are in season.

Over-sensitivity is a problem across the board and no two groups are as bad as the government and parents. By ‘the government’ I mean our government, and by ‘parents’ I mean the people who sit at home watching Jeremy Kyle and doing the ironing all day while feeling the need to band together to shout at issues and groups they have no idea about.

The former group find moderation a foreign concept, preferring to deal in black-and-white resolutions to everything. Some games are too violent? Ban all violence then. Oh wait, no that’s ridiculous. Let them be as violent as they want? No, that’s not right either. The parents won’t be happy about that. Let’s set up a committee and hire some consultants and pump 10 million pounds of taxpayers’ money into solving the problem over a period of 24 months.

The latter group seem to be fine with making a big deal out of every little tiny thing that shocks them and makes them clutch their information-starved babes ever closer to their breasts. Mumsnet would be an easy target if it wasn’t for the fact that they often raise awareness on some pretty good arguments and often string up the government for fucking around with children’s futures.

So the top mother’s network aside, I’m on about the people who sit around ‘gasbagging’ as my Dad calls it; essentially waxing lyrical on a load of issues they know sweet fuck all about and quoting The Sun as a source. If it was just the chatting it would be of little concern, but it’s when they get all up in arms and start accusing and condemning that it all goes terribly wrong. The Manhunt incident is a good example.

Basically a kid who had had a troubled upbringing and suffered from severe social interaction issues stabbed another kid with a pair of scissors. When the police searched his house they found a copy of the notorious snuff game Manhunt, and after a few local parents raised concerns about the link between the events of the game (which none of them had played) and the actions of the boy (who most of them already knew to be a little shit) all of a sudden the headline became ‘Boy copies brutal game violence’.The fact that the 15-year-old shouldn’t have even been playing the 18-rated title didn’t matter.

The revelation that this was not the first violent act he’d committed, just the worst and latest, also failed to change anything. Even when the judge claimed it was ridiculous that the game had anything to do with the incident and instead blamed a combination of upbringing, psychological instability and a lack of a solid father figure, the parents still bleated on. In the end all this led to Manhunt 2 pretty much being banned before it was released, although it slipped out on the Wii and was fucking terrible. 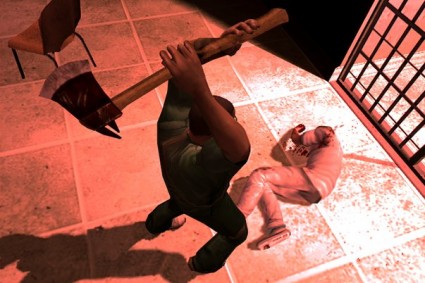 Violent? Yes. To blame for real-life murders? Not likely.

I’ve gone off track here, but my point is that sometimes we become the very people we constantly oppose. So while most people will take Bad Education’s humorous mockery of the reaction to violent games in schools as just that, there will invariably be the few who can’t see the funny side and take it as a thinly-veiled attack on the games themselves.

Shut up and see the funny side you miserable bastards.