The Vent: The End of the Paper Trail?

Darksiders 2 is a great game. Loads of shit to do, tons of weapons and armour to equip and a really compelling story to keep it all together.

One problem though; no manual. So upon getting the game and being devoid of the internet due to moving into a new place, I had no idea what was going on. What does this item do? How do I get this to work? Where is this thing in the menu? All questions left unanswered, because THQ are part of the increasing band of publishers trying to do away with the traditional paper manual. Saving the environment? Yeah, right…

The main problem is that there’s a much simpler, easier solution that works for everyone; put it on the disc. Ubisoft pioneered this concept with their Assassins Creed games, folding the manual into the Animus database and writing it like an instruction manual for operating the machine. Although most games wouldn’t allow such skilful weaving of manual into game world, it still worked. You got a little leaflet with the basic controls and a bunch of legal health and safety shit in the box and the rest of the info was in the game. So why can’t other publishers do the same?!

The usual argument is that there’s not enough room on the disc. I know for a fact that many games actually have random, needless padding because all 8.14GB of the disc needs to be full for the Xbox to read it. I’m also guessing that Darksiders 2 is probably smaller than any of the Assassins Creed games. Either way there’s ample room for a tiny, text-based manual to nestle in the Extras menu or whatever.

In the absence of the internet I was denied a manual for my game. Knowing a few friends who don’t have the internet at all and considering the fact that thousands of people across the country don’t have access to it, I think it’s pretty fucking inconsiderate to keep the manual from them.

All that aside, a manual is a traditional and essential part of a game box. It’s one of the reasons millions of people still buy their games legit, forgoing the cheaper and easier method of piracy. There’s nothing like buying a game from your local retailer, feverishly unwrapping it on the bus home and flicking through the manual to see what you’re in for when you finally slot it into your console. I used to do it all the time, when I would trade in PS2 games on a weekly basis. It gets you in the mood, gets you excited to play the game. By the time I got home I knew all the controls, had a good idea of the mechanics and knew whether the story was going to be up to scratch.

I suppose these days demos are more accessible and there are more developer videos and sneak previews than ever before, but those without the internet won’t see those things, which makes having a paper manual even more essential! I get that publishers are trying to reduce the amount of paper used and save the world and blah blah blah, but the fact is, the factories used to burn and print discs are fucking up the planet way more than the use of a few sheets of paper. 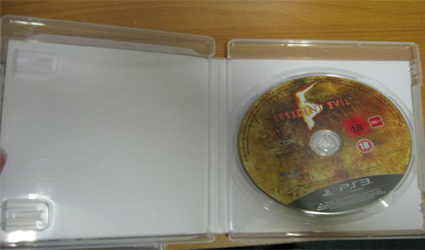 Is this what we have to look forward to?

The worst part? The shit-eating excuse they give you in the flimsy leaflet. Something to the effect of:

“Your manual is online. This way it’ll never get lost, damaged or mistreated and you’ll always have it to hand when you need it.”

Bollocks. The manual stays in the box unless you’re reading it. If you leave it out and lose it, that’s your own stupid fault; it shouldn’t be a reason for not having one in the first place. The disc is being played over and over again, and these days one wrong knock of the old Xbox 360 and you’ll have yourself a shiny new 40-quid coaster. As for the online manual, even if you have the internet there’s no guarantee the servers will be fault-free. Relying on the internet is a bad idea, and you only realise how bad when you have to go without it.

To be honest, I wouldn’t be surprised if manuals disappear altogether soon, replaced by forums and tutorials. Developers still think a boorish first level full of irritating tooltips is the best way to teach you the game, like giving you a manual to read would just be way too much for your game-addled brain. There’s nothing worse for breaking immersion than a ‘Press B to crouch’ message popping up as you bolt through a bullet-ridden corridor in the game’s meticulously planned and executed first stage.

All that effort spent trying to bring you into the game in the most exciting way is wasted by these infuriating messages. Yet how, pray tell, will the player know how to crouch if we don’t show them? Give them a fucking manual; that’s how!