Vanquish is the latest game from director Shinji Mikami, a designer with great titles already under his belt; notably Resident Evil but also including Devil May Cry and Viewtiful Joe. Vanquish is set for release in October but SEGA have released a demo to tease us until then. The demo is available on Xbox Live and the Playstation Network, so switch on your Xbox 360 or PS3 and go get it! Read my demo impressions while you’re waiting for it to download though.

The premise of Vanquish is that the human race is still up to its usual tricks in the future and has used up almost all of the Earth’s resources. The two biggest superpowers, America and Russia, are fighting over who gets to control the remaining supplies. No prizes for guessing who you are – yep, that’s right; you’ll be fighting for the good ol’ U. S. of A. Everyone’s got it in for the Russians in games at the moment. Question is, what does the demo tell us about this one?

Put on your best battle-suit and tie
What sets this apart from the majority of war videogames, is that your character dons a bloody awesome, futuristic battle suit. This Augmented Reactive Suit, or A.R.S. for short (shame it’s not referred to as the ‘Augmented Reactive Suit Equipment’ or something, heh) gives you all sorts of advantages in battle. As well as being a defensive exoskeleton to help withstand attacks, it provides you the strength to punch through walls, boosters to skid along the floor on your knees at high speed (reminds me of my youth, that) and can even activate a bullet-time-esque mode to deal out maximum payne, in slow-motion (see what I did there?) 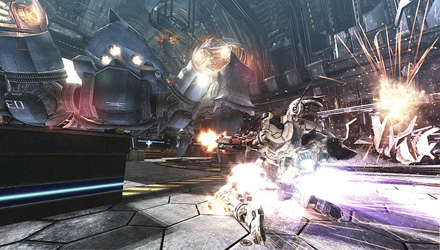 Don't come crying to me, when you've got grazed knees.

What instantly stood out to me, is that unlike the controller-wrestling required of clunkier third-person robot games like Armoured Core for example, Vanquish is an absolute joy to control. A brief but very helpful tutorial lets you learn the basics (which you’ll pick up almost instantly) such as dodges, boosts and slow-motion. Your battle suit moves so swiftly and gracefully, that with a little practice you’ll be putting any tutu-wearer to shame.

The weapons available in the demo are quite generic, including an assault rifle, heavy machine gun and shotgun. That said, they are all satisfyingly meaty and can be upgraded with pickups on the battlefield. EMP and frag grenades are also available, although I found them a tad hard to aim sometimes; an aiming indicator may be a handy inclusion. 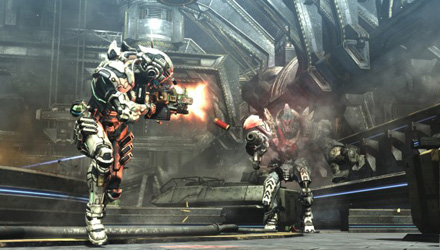 Gone in sixty seconds
The demo is certainly short but sweet. It only takes about ten minutes to complete, and literally whizzes by. Ascending a staircase onto a battlefield, you use your built in weaponry and powers along with machine gun turrets, the now-ubiquitous third-person, Gears of War style cover system and even pilot-able mechs, to gain control and fend off additional units dropped in by teleport and air transport, before finally taking on a gigantic boss robot armed to the teeth.

This is the climax to the playing session and requires some nimble footing to avoid swarms of missiles and humongous death rays, whilst crippling the weak spots on its appendages, before going in for the kill and laying everything you’ve got into its core. To add insult to injury, the first time it’s downed, it will resurrect and shift forms from a spider-like being to a more traditional two-legged robot. 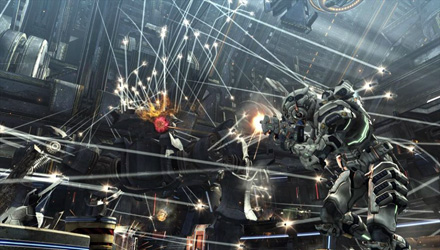 This battle is one hell of an adrenaline rush and is immensely enjoyable. Thankfully, even though I had selected Normal rather than Easy difficulty, it was still very doable and this type of game isn’t generally my forte. In my experience, titles similar to Vanquish can be hard as nails sometimes, although to be fair this demo could be set in the first level… (crosses fingers for lack of soul-crushing difficulty). If you’ve got a thing for big numbers, then you’ll be pleased at the inclusion of a high-score rundown after every level, based on many factors such as completion time, enemies killed and playing style.

Aston Martin by name, Aston Martin by nature (a silver one, especially)
Vanquish runs silky-smooth, and has delightfully over-the-top visual effects, with its numerous explosions and lasers. Perhaps the main criticism that could be levelled at its visual style and the majority of games of its type, is that the scenery and many objects are all metallic silver: i.e. grey, grey, grey. From what I can gather, living in the future will be devoid of almost any colour. The aforementioned carnage will provide the majority of any vibrant hues to be seen, although many of the enemies are in red to stand out from the sterile setting. 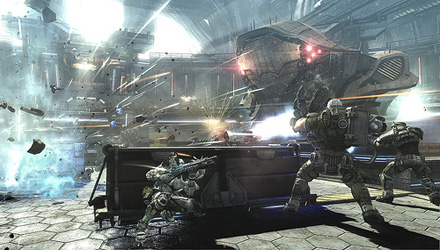 It’s hard to deny that Vanquish is a beautiful game however. The style is distinctively very Japanese, with nods in design to other games such as the Metal Gear Solid series. The robots/battle suits aren’t clunky, ugly creations; they’re all very sleek and futuristic. The thoughtful designers at Platinum Games wouldn’t want you kicking ass and not looking stylish at the same time, would they?

All set to Vanquish the opposition?
Even though what’s on offer in the Vanquish demo is limited, the little you do get is one hell of a fun blast. The game code here probably isn’t technically 100% finished, but it all feels extremely polished already. So, it looks like Vanquish is set to be a great game although I don’t think it will get the recognition it deserves.

Firstly, it’s only going to be single-player. It’s good when developers focus their efforts entirely on making a top quality campaign, instead of pumping out a mediocre one with a half-arsed multiplayer mode tacked on, but this is one title I feel would be fantastic online. Another important factor is that the release date is sandwiched between two unstoppable juggernauts, Halo Reach and Call of Duty: Black Ops.

These and the other high-profile releases common at this time of the year mean that Vanquish may be destined to fade into obscurity. All I can hope is that the influence of the director and developers involved will at least make it popular enough to be a cult success.