Another year, another set of golden faces to be given out to the hard-working folk of the games industry. Once again the great and the good (for the most part) descended upon the Hilton in Park Lane, London. In their tuxes and frocks they turned up either hoping to pick up a gong or two, or waiting to pass one out.

The runners and riders were a fairly mixed bag, although nothing unexpected. Journey was up for a few, as were Far Cry 3 and Dear Esther, among others. Yet what really happened? Let me give you an indie website’s insight into the evening.

Red carpet arrivals are always a bit of a mixed bag at these events; you get some idea of the people that might be coming through, and you get the opportunity to ask one of the runners to bring people to you, but not everyone wants to talk to the plebs. Sometimes people you were not expecting come through and you are neither prepared nor asked if you’d like a word.

There were a few names on the list that I wanted a word with, so I staked my claim on Ade Adepitan, Louis Smith and Rhianna Pratchett as my starting point. Imagine then, my chagrin when Boris Becker walks by, chats to the newspaper types (we are arranged by the media we work for) and is whisked away quickly afterwards. Boris Becker. BORIS BECKER! I’m going to have to let that one slide, but had he been Goran Ivanisevic there would have been hell to pay.

It wasn’t all bad; I got to speak to one sportsman as Ade Adepitan came to have a chat. I started by asking him (after congratulating him on his collection of Paralympic and World Championship medals) what he’s been up to since the summer of sport. He’s been busy!

“I’ve made a documentary (a one hour special) in Nigeria, which is a little bit about my back story. It was really intense; we met some disabled guys who live under a bridge in Nigeria. I also made an ‘Unreported World’ in Cuba and it’s about keeping athletes which are defecting to try and play professional sport. Tough thing about that was that I had to do all the interviews in Spanish. I was sweating about that.” 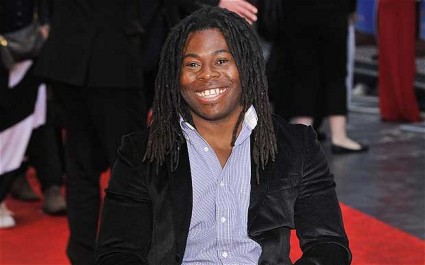 I reassure him we are all English here and go on to ask about his experiences with the London Olympic and Paralympic Games, and whether a part of him wanted to have been competing.

“I am way too old to compete! But… a little bit. I suppose… you know I enjoy playing, but the whole international thing is a massive commitment. I played for sixteen years, six hours a day, six days a week. It is your life. Maybe for me the biggest pull was that it was in East London; my manor, where I grew up, on my mum’s road and where I used to train. But it was just as good presenting and it was a buzz seeing everyone reacting to the Paralympics. It’s unheard of. I mean we’ve set a standard for Rio and they must be absolutely crapping themselves!”

We then got to talking about actual video-games, just for a laugh, and his take on the whole “PES vs FIFA” rivalry was very amusing. “It’s almost like a test: ‘Pro Evo or FIFA?’ and you’re looking at them trying to work out what’s the right thing to say!” I didn’t ask if he was on Team Xbox or Team Playstation.

Then he totally took me by surprise, though:

The way he was talking, enthusing, about this scenario gave me, and the few around that were listening in, cause to pause, and think ‘damn that would totally work!’. It is about time we had a game like this, not only because the disabled community is grossly under-represented in games (are they even represented at all?), but also because it sounds like a game I would love to play. Someone really needs to get to work on this.

Jonathan Ross came through the doors, and is impossible to miss. His presence is felt immediately, such is his command of the room. You don’t need to ask to speak with Jonathan. He will ask to speak with you. This is why I love him; he’s gotten to the top, and he remembers the people that got him there. My motley group of five ‘online types’ are the last to be seen by him, but we were by no means least in his eyes.

A gentleman behind me says; “ladies first”, putting me squarely on the spot. “It’s a pleasure to meet you again…” I say with a mock knowing nod and smile. “Yes I saw you last year…” His manner is very convincing but I don’t believe he remembers me for a moment. I don’t care though. The man is charming. 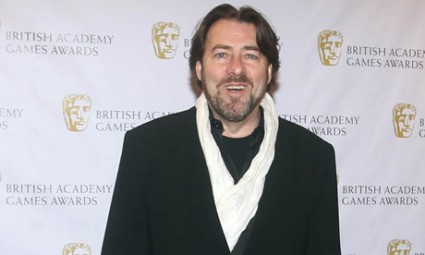 I ask what he has been up to recently (because I know that will get the ball rolling). In a nutshell, he’s being doing everything. All sorts of projects, chat shows, writing, presenting. Well, you’ve probably seen it or read it or heard about it. He has bought out a game which is free on iOS and Android as of Thursday 7th March.

“…I’ve also been walking the dogs, I lost some weight, I put it all back on again so I have to lose that again. That’s kind of my year.”

One of my fellow journos stepped in, saving me from further soul crushing embarrassment with “how do you find time to play Ni No Kuni?”

“I’m only about two hours in. I’m getting annoyed by that Welsh accent; I hate the way they write it phonetically so you are reading on the screen ‘weyoo weyeooo…’ so I am not enjoying that, but the backgrounds are beautiful, the story is great. So I am enjoying it, but it isn’t perhaps quite as immersive or engaging as I had hoped. Yet. “

When asked what his pick of the year has been, Ross is quick to pick The Walking Dead, and he enthuses about the comic and the TV series as well. “But [the game] is very clever; great use of music, and when you think about it, it’s only about four or five big choices you make in each installment, but important moral choices as well, so I enjoyed that aspect of it a lot. That felt interactive in a new way.

“Mass Effect 3? I enjoyed that. Who doesn’t want to be gay and sleep with aliens? Finally I get the chance to be the best I can be. You know what I didn’t much enjoy? Curiosity, which managed to be both innovative and terribly boring at the same time, which I don’t think was the intention.”

For a while Ross talks about how he has been promoting his new game, and he has been doing it the usual way, rather than relying on his status as a top celeb who could get anything into any paper. Instead he has been doing games podcasts and talking to the community. He acknowledges the hard time that we get:

“Even out there [pointing to the area in which the cream of the journalist crop stand] they were asking ‘do you not feel like a bit of a kid playing video-games?’ No. Go fuck yourself. I’m an adult but I’ve played games for the past 25 years. Yes, some games are juvenile, but some of them are sophisticated. If you look at a ‘game’ like Journey; that’s clearly a step away from more immediately gratifying goal based game experience. So I am always keen to talk to [the top journos] and say ‘number 1 it won’t turn you into a killer, and number 2, it isn’t just for sweaty young boys.’”

That was the absolute highlight of the Red Carpet. Nay, the entire show.

The award ceremony itself came around, and yet again the online folks were treated like second-class citizens by all except one of the event organisers (Hi, Kristoff!). Despite having set up camp and roasted marshmallows at one table for five hours, just as the awards were about to be handed out we were asked to move to a table much further away to make room for the print guys. Though we were rescued by Kristoff and remained firm.

At previous ceremonies we had been allowed a spot at the winners’ line up, but this year felt like a demotion; online folks got a table and had to hope that the winners wanted to speak to us. After speaking to everyone else, they didn’t.

The one person that did want to chat was Rhianna Pratchett who, as you all know, wrote the new Tomb Raider, which was coincidentally released on the same day. I will write up her interview in a separate post because what we spoke about does not really fit here and I think it is worth its own space. She was fantastic and I think I fell in love with her a bit. She was the person I thought about most on the way home, during that “goodness me I was at the BAFTAs. I can’t sleep” phase, and I was still thinking about her awesomeness the next day. I still am now.

Anyway, the awards themselves were strangely quite interesting. They have all been published, but it should be noted that the vast majority of them went to indie or downloadable games. The obvious exception, of course was Dishonored, which walked away with Best Game, much to everyone in the Media Room’s surprise; we had all assumed it would be Journey.

May as well tweet the Best Game winner now and nip to the loo. We all know what it is. #BAFTAGames

Well that told me. #BAFTAGames

Journey had already picked up five awards; maybe adding Best Game would seem greedy or sycophantic, depending on which side you are on.

Yet again the experience was fantastic, if slightly more disappointing than previous years. It does highlight that there is still a way to go for us online types before we are accepted fully. In terms of video-games awards though, I can’t help but feel that the winds of change are blowing.