WiiU’s Sales Take A Critical Hit – Will ‘Pokémon Rumble U’ Be Super Effective?

Some days, you don’t want to face the world. You just want to curl up inside your Pokéball and hope all the bad news will go away.

Sorry Nintendo, it’s time to face the facts. The WiiU is selling poorly. It’s time to use your special attack. Pokémon Rumble U!

I’m not normally one to harp on about sales figures, but these are hard to ignore. The lovely and smart people at Gamesutra have gone and produced a handy graph to help explain just how bad these sales are. 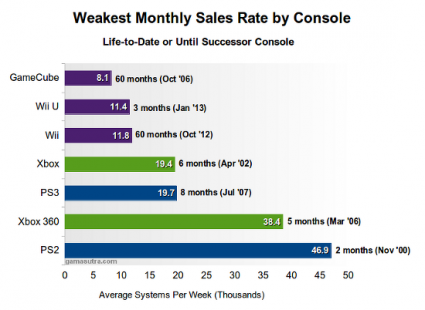 It’s a little complicated, but the message is clear. The WiiU’s not selling well.

The above graph shows each consoles worst month up to today’s date or up to the date on which their successor was released. E.G, the graph shows the PS2’s worst sales month up until the PS3 was launched. Get it?

Whilst it’s not the worst on the list, it is another Nintendo console that is. The GameCube had its worst week 60 months into its life, right on the cusp of the original Wii’s launch. Having such poor sales 60 months into the system’s life and months before the next console launches is understandable. How’s the WiiU doing?

The WiiU is facing this trouble 3 months into its life. Oh dear.

It gets even worse. The Vita, the laughing-stock of the hardware sales world is selling better than the WiiU at the moment. That may be down to the recent price-drop, but it’s still not much of an excuse, with the WiiU trying the whole price-drop thing as well. 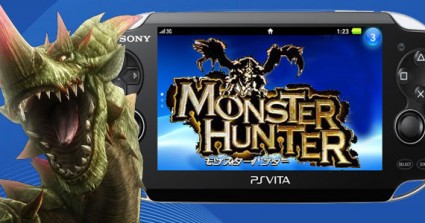 Turns out, Monster Hunter’s big in Japan. Who knew?

Still, it’s not all doom and gloom. Nintendo recently announced and revealed their Skylanders challenger, Pokémon Rumble U.

Looking like a collection of mini-games with a multi-player focus, Pokémon Rumble U sees you battle swathes of enemies in real-time and compete in other tasks. It all looks pretty hectic and could be a lot of fun, particularly for the younger players out there.

Oh, you want to know a bit more? OK, how about this – THE GAME USES THE NFC FEATURE BUILT INTO THE WIIU’S CONTROLLER THAT ALLOWS YOU TO LEVEL UP AND USE TOYS THAT YOU CAN BUY! (sold separately)

Have kids? Like having money as well as having kids? Tough.

If this takes off, it could turn into a real cash-cow for Nintendo and could even help boost the WiiU’s falling sales. As someone that loves a bit of Pokémon and loves to see Nintendo do well, I sure hope this turns out to be the case.