Bandai Namco and developer CD PROJEKT RED have announced that the latest adventure of Geralt of Rivia will launch next year on the 24th of February 2015. There will be two versions of the highly-anticipated The Witcher 3: The Wild Hunt available: The now-customary Collector’s Edition notably features a detailed, hand-painted statue of Geralt in battle with a Griffin, a shiny wolf medallion, plus plenty of other bonuses too. 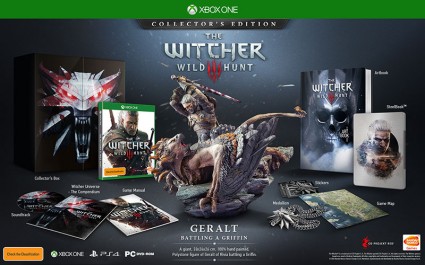 This model is badass.

Still, those who opt for the vanilla option will also find themselves with a generous helping of goodies, thanks to the following being included in the standard edition:

Those that do splash the extra cash will get all that and more, also bagging themselves:

Personally, I’m really looking forward to seeing what The Witcher 3 has to offer, especially since it features the series’ first fully open world, one that CD PROJEKT RED claims is bigger than Skyrim. I am hopeful, however, that I won’t see a repeat of the save corruption that blighted my time reviewing its predecessor… What about you? Are you looking forward to the next instalment of The Witcher? Why not hit us up in the comments and let us know?