People are pretty quick to write-off the need for AAA games. It’s not hard to see why, when so few games are trying anything new and most are simply treading old ground. It’s funny, then, that Alien: Isolation, which is based on a film over twenty years old and plays like Amnesia – which is itself five years old – feels so new.

The truth is, Alien: Isolation’s breed of stealth-horror has been seen before, but it’s never been seen in such a polished light. Environments hold incredible detail and lighting effects have you cowering at every shadow. Add into the mix the undeniably iconic creature that is the Xenomorph, and you’ve got a reminder of what big budget games can be.Isolation sees you playing as Amanda Ripley, the daughter of the Alien movie’s Ellen Ripley. Amanda is getting on with her job, working for Weyland-Yutani (boo! hiss!) when it’s proposed that she goes and collects the flight recorder that holds the details of her Mother’s fateful flight.

Stil wanting ‘closure’ on just what happened to her Mother, Amanda sets off to where the flight recorder’s being held – Sevastapol. It transpires that Sevastapol has fallen on hard times. It’s nothing more than a derelict lump of metal floating in space, with all of the shops having long closed down, the inhabitants of the space station mostly already gone (mostly) and of course, something far worse. 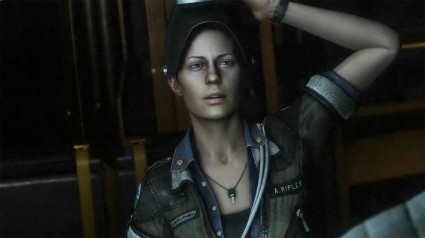 A failed attempt at docking into the space-station means you’re stranded on the alien-inhabited station and you’ve got to help out an injured member of your crew. This means you’ll be tasked with finding object A so that you can power up generator B, fetch medi-pack Y to help out crew member Z and so on.

The strength of Alien: Isolation isn’t in the mission design, as it’s largely a repetitive set of fetch-quests, but it’s the slow-paced creeping through the extremely dangerous Sevastapol that is the real draw here. You’ll need to take things extremely slowly, as rushing around will only draw attention. This may be a deal-breaker to some people, but don’t say we didn’t warn you. To get the most out of Isolation, you’ve got to be prepared to slow things down and be extremely cautious with your movement. It’s not uncommon to spend upwards of a minute hiding in a locker, checking your motion-tracker sporadically and praying that the alien goes back into the air-ducts. If you don’t think hiding sounds like ‘fun’ then this probably won’t be the game for you.

Slowly moving from room to room wouldn’t be half as interesting if it weren’t for the fact that the game world is incredibly detailed and unbelievably faithful to the source material. It has perfectly captured the ‘retro-future’ that the 1979 film showed us. Huge, low-res CRT monitors show us readings from advanced machines we can’t hope to see in our own lifetimes and video-feeds from distant planets look like they’re coming from VHS players that need their tracking looked at. 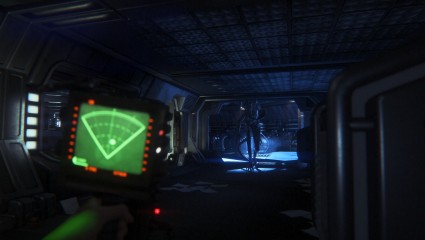 The fact that the screen’s not HD is the least of your concerns.

It’s not just that the world’s visually pleasing – it’s the way that the environment affects how you play that really makes the design shine through. You’ll need to map out your safest route if you’re to survive your encounters, meaning you’ll be on the look-out for lockers, gurneys, desks, air-ducts, computer terminals – the list goes on. Fact is that everything you see will need to be used (or ignored) if you’re to get to where you need to go in one piece.

Do you make a run for the locker? Do you wait under this table for just a minute longer? Can the alien see you if you hide behind that gurney? Perhaps you could get away with using the air ducts? These are all questions you’ll be asking yourself as you’re hunted relentlessly.

I remember one occasion where I’d spent upwards of three minutes trapped in a locker, waiting for the alien to leave the room. Eventually it moved far enough away that I foolishly made a run for the next area. I heard the alien scream, letting me know that it had had found me out. Panicking, I jumped into an air-duct and crawled my way closer to the elevator that would signify the end of the level. Moving in the air-ducts is painfully slow, yet somehow the alien hadn’t got me and I was within reach of my goal.

Unfortunately, in my haste, I failed to notice the tell-tale ‘drippings’ falling from the vent above me. As I strode confidently towards my goal, the alien descended from the vent and promptly ate my face. Not in a vigorous French-kissing manner, but in a killer, ‘other-world lifeform’ kind of way. Game over, man. Game over.

The level of detail isn’t just in what you’ll see and where you’ll be. The sound design borrows heavily from the films and as a result is perfect. These audio cues aren’t just there to ramp up the tension but are crucial to helping you get through your time with the Xenomorph. The alien’s hisses and screeches will let you know when you’re in trouble and the thudding noise coming from above you lets you know the alien’s in the vents and could drop down whenever it so chooses. Thumping footsteps let you know it’s skulking about looking for you. A screech is often indicative that you’ve been spotted. All of these noises let you know where the alien is and what the alien’s doing. If playing on the PS4, your controller will emit that iconic beep whenever your motion-detector picks up something approaching you. If you don’t play Isolation with the volume way up, you’ll be making things harder for yourself. 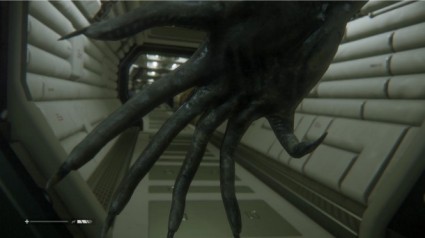 If you’d listened a little more carefully, you may have avoided this…

Making things harder for yourself is probably the last thing you’d want to do given the already considerable difficulty you’re facing. Let’s make this clear. This game isn’t hard, as such; it’s punishing. You cannot make a mistake without it resulting in, 90% of the time, death. Compounding the punishing nature is the fact that some areas have checkpointing issues, meaning you could easily lose 30 minutes of play if you’re not careful.

Also, even if you are careful, there were a number of times I felt like I died for no good reason. The alien has an element of randomness to it. This unpredictability means you’ll always be on your toes but also leads to some moments where fear turns into frustration.

To help you out there are a number of items you can construct from the detritus littered around the space station. It’s never explained how to use them, though they’re fairly self-explanatory. Molotov cocktails can be thrown to create a diversion or planted to the floor to act like a combustible mine. I often found myself loathed to use these items as they all created lots of noise, which drew the alien away but rarely sent it back into the vents. 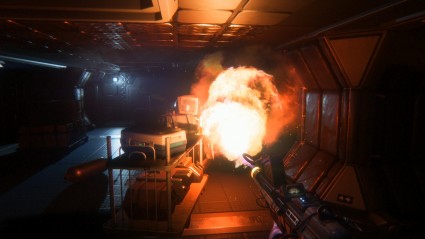 I especially didn’t want to use these items on anything other than the alien. That’s right, as you probably already know, it’s not just the alien that’s causing you grief. Other survivors and androids are also patrolling corridors, and sometimes forcing you into combat. These moments where there’s seemingly no option but to fight are few and far between, though add to the list of moments where fear sadly gets turned into frustration.

Isolation also suffers from what I feel is an overly long running time. It’s a good 16-18 hours long, which may sound like good value, but the way in which it’s achieved is through what seems like a number of false endings. The story isn’t exactly strong, so to have so many moments where it all goes wrong again isn’t exactly adding to any sort of narrative.

There are also some questions to be asked about the story and its plot holes, characters that are hard to care about and an over-reliance on graffiti to really ram home the point that ‘things are bad’. It’s a shame that some of the best story moments will probably be missed as they’re all littered about via the tried and tested medium of audio tapes and computer consoles full of text documents neatly explaining the tales of the space-station’s former inhabitants. 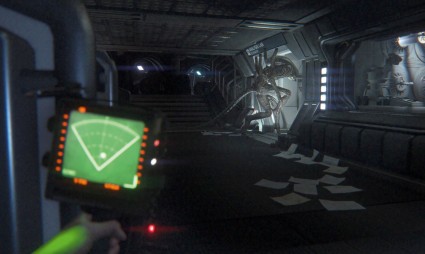 So while there are a number of negatives to overcome, it’s amazing that Alien: Isolation manages to still be one of the most outstanding titles I’ve played this year. For as unfair as the A.I. can be at times, the moments where it comes together and you feel like you’ve outsmarted a predator, it’s breathtaking. For as uninspiring as the main story can be, the little snippets of narrative littered throughout the game and told through the environment are worth it. For all the moments where you feel frustrated at harsh punishments, there are ten more moments where the tension and suspense are on-par with any horror film you’ve ever seen.

Perfect? Of course not. If you can afford to take your time with your games and if you even have a passing interest in things Alien, this is an absolute must.