I’m going to be completely honest: I didn’t even know that the Arcana Heart series was a thing that existed until the press release for its third iteration – Arcana Heart 3: LOVE MAX!!!!! – landed in my inbox last week. Being the site’s resident fighting game fanatic, I was baffled as to why I wasn’t aware of it prior, but a quick trip to Google showed a colourful, one-on-one anime fighter with an energetic all-girl cast.

What I found upon closer expectation, however, was a commendable fighter in the BlazBlue mould, but one that ultimately won’t keep me away from the likes of Ultra Street Fighter IV for any real length of time.

Boy, do I hate those exclamation marks…

Like so many other fighting games recently, Arcana Heart 3 adopts a three-tier, three-button attack system for its most common attacks and special moves. The madcap characters’ nimble pace allows for quick-fire, impressive combos, while a useful mix of double jumps, dashes, dodges and aerial recoveries help you move around the screen freely to escape danger or start fresh assaults. Curious is the use of a homing button, which sees your character fly directly towards your opponent; handy to get yourself right back into the fight having been knocked away or to take advantage of poor positioning. By using a mix-up of all these abilities, it’s possible to perform some insane lengthy aerial combos, which is incredibly fun when you’re in full rhythm.

Arcana Hearts 3’s true depth, however, is provided by countless supplementary attack and defence options, thanks to the titular Arcana.

When choosing from the generous 23-character roster, you’re also required to pick from an equal number of Arcana, which in Street Fighter terms basically means you get to decide what set of Super/Ultra moves you’ll take into combat with you. Any character can be aligned with any Arcana and this means that, satisfyingly, your gameplan can change drastically, even when sticking with a favourite fighter. The level of choice can be a bit overwhelming at first, but it didn’t take me too long to settle on a few favourite character/Arcana combos that suited my particular style and strategies. 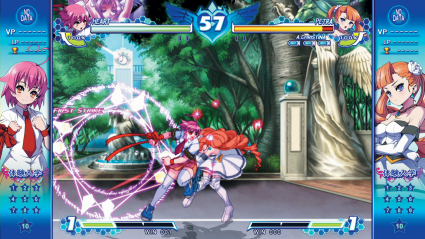 Do Japanese school kids really fight this much?

The thing is, the Arcana moves – performed by using the gauge at the bottom of the screen – aren’t just about offensive power and dazzling visual effects; they can be just as handy defensively too. The Metal Arcana, for example, well-balanced between attack and defence, allows its user to generate an immobile shield capable of withstanding a couple of attacks. Yet with different inputs using the same Arcana, you could also hit your foe with a barrage of spears. There are three levels of supers at your disposal; Super Attacks, Arcane Supers, and the Critical Heart, which is generally devastating but requires – and I say this perhaps ruined by other fighters’ comparatively straightforward schemes – complex inputs to pull off. Each is adequately flashy, providing a nice visual reward for landing one.

Also useful is the Force gauge, located just under each health bar and, when at 100%, it allows you to perform an ‘Extend Force’ that can act as a cancel and temporarily boost your stats. When activated by hitting all three main attack buttons, the stage changes to a darker, more twisted theme, and then you have short window in which to perform one of three other moves. Most useful is the Arcana Blast that knocks your opponents back a fair distance, giving you time to breathe. Most powerful is the Arcana Blaze; a hard hitting attack more in-line with the supers, while lastly Arcana Eclipse spams a large area and prevents counter attacks.

There are a couple of single-player modes on offer, but I found most hard to like. There are two Story modes, for example, but unless you’re already obsessively into its plot, it’s downright impenetrable and I found myself skipping the dialogue as soon as possible. Worse still is that the secondary story mode, ‘After Story’, simply proves a pointless exercise for the uninitiated and consists of pages upon pages of dialogue with little context, and offers just one fight per character. In this sense, I think the inclusion of a straightforward arcade mode with minimal story would have offset my disappointment massively. 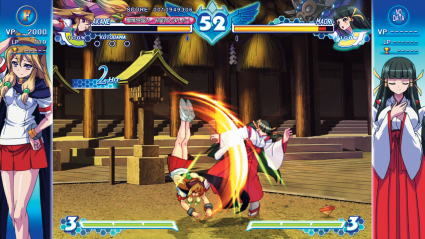 Here, the Akane is channelling the powers of Rene Higuita…

Its themes can feel quite creepy too, depending on your stance on the sexualisation of young teenage school girls, but at least they’re interesting and unique. Kira, for example, is a young swimmer who fights half inside a bubble of water, literally treading water as she battles, while Eko is a child who uses her living street drawing as her avatar to fight through; it’s a fairly diverse cast in spite of any issues I might have. Its anime styling definitely makes for a pretty game too, but I was disappointed by the lack of movement in the stages. Sure, when you activate the Arcana Extend it morphs into a more twisted representation, but it remains bizarrely static and lacks a sense of life.

Elsewhere, while the typical Time Attack and Survival modes perform as solidly as you’d expect, the training mode is particularly poor, only allowing you an unlimited fight against an opponent whose actions you can dictate. It never interactively teaches you how to play or use any of its complex systems, an area in which the genre has come so far in recent years. Even the Trial mode, a place where I’ve found useful lessons in the likes of Marvel vs. Capcom 3 or Persona 4 Arena, is highly disappointing, giving you only the vaguest descriptions of the actions and combos it wants you to perform. Lastly, after three nights of trying, I’ve been unable to source an online match-up. This is a shame, because I’ve heard from a couple of sources that the net code is surprisingly solid.

Arcana Heart 3‘s disappointing set of modes are what prevent it from being mentioned amongst the genre’s finest. The story and setting are perplexing nonsense that only prevent you from getting into the action swiftly, the After Story provides absolutely nothing of note, and the training and trial modes are missed opportunities in teaching you how to play.

Still, just hiding below the surface is an able, mechanically strong and quick-paced fighting game that’s worth exploring. You just have to dig through the fluff to find it.