If there’s one genre in vogue right now, it’s the hero shooter. Whilst we have Paragon, Paladins and Lawbreakers to look forward to later in the year, we’ve just been hit by two big ones both vying for our attention: Overwatch and Battleborn. If you follow video game news at all, you’ll know that one is ‘winning’ by a large margin – and it certainly isn’t Gearbox Software’s effort.

Releasing two similar, competing AAA games within a short timeframe is typically suicide for at least one. Battleborn hails from the developers of Borderlands and had the advantage of a slightly earlier release, but it didn’t stand a chance against the indomitable might of Blizzard and the hype train which had been steaming behind Overwatch for some time.

Reasons for comparison are clear. They’re both first-person shooters set in a fantasy universe with a diverse roster of heroes to choose from. To the uninitiated, they’re practically the same game. In reality, this could hardly be further from the truth. And whereas Battleborn is far from perfect and falls short of the refinement present in its adversary, it’s a distinct experience of its own which warrants a look.

Overwatch’s clearest parallel is Team Fortress 2. A class-focused, team-based shooter, its multifarious crew of characters synthesise with and counter each other’s strengths and weaknesses across several objective-based modes. With only a handful of such modes and no story campaign it’s surprisingly light on content, but what you do get is a package bestowed with the extraordinary level of polish we’ve come to expect from Blizzard. Matches are lightning-fast and benefit from an inviting level of surface simplicity but with plenty of depth to uncover after extended playtime. 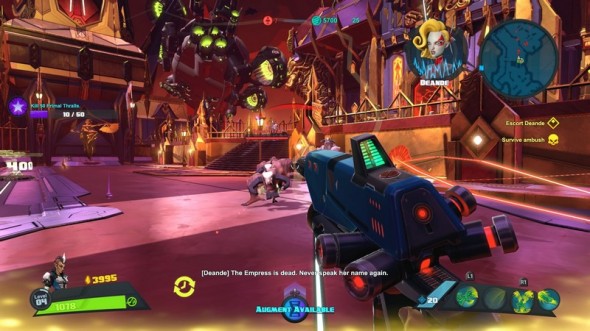 For better or worse, Battleborn‘s campaign is a wild ride

Battleborn is, beyond any doubt, an entirely different beast. The first divergence is its co-op campaign with an abstruse storyline, compounded by the matchmaking system which essentially forces you to play missions randomly and out of order. With its expendable plot and character dialogue which ranges from occasionally funny to try-hard and infantile, it’s a relief that you’ll have several other players join for the ride.

Each mission is a linear track of getting from point to point, interspersed with hordes of grunts, objectives to defend or destroy and the occasional boss to tackle along the way. It’s a setup which would be uninspiring for solo consumption but lends itself well to cooperative play, with plenty of action to sink your teeth into and bonus challenges thrown at you every so often. The drawback? With only eight 30-40 minute missions and the cruel fact that running out of respawns – even right near the end – results in having to start all over, it’s not long until repetition starts to set in.

Competitive play, then, is likely to be your main go-to. On paper, it actually doesn’t sound too impressive: three modes across a total of six maps. As any League of Legends player will tell you, though, you don’t need a large quantity of maps to facilitate varied play. In fact, the MOBA genre runs deeply through the DNA of Battleborn in a multitude of ways. Not only is this felt within the hero system but also its Incursion mode, which is for all intents and purposes a MOBA in itself. A 5v5 gametype, it features minions, towers and a boss robot on either side to defeat in order to claim victory. 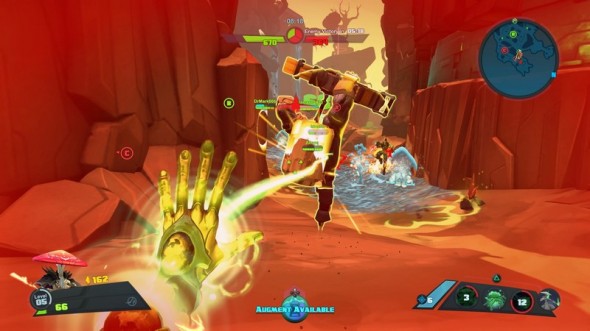 If all else fails, be a healer

‘Capture’ is just that: a race to capture different objectives across the map and keep them held. Rounding out the selection is Meltdown, an original spin on the MOBA formula which involves shepherding your minions across the map to sacrificial altars whilst stopping your opponents from doing the same. All three modes are uniquely entertaining and each justify their place within the collection. In stark contrast to Overwatch, however, matches can take 30 minutes or longer and contain much of the complexity you’d come to expect from a MOBA-like.

Each character has an ephemeral levelling system of 10 levels, every increase affording the choice of an ‘augment’ – a new perk or buff. You can collect shard currency to build and upgrade towers, spawn super minions, or purchase one of your three extra perks equipped within a personalised loadout. Depending on the mode you may also be able to capture certain points to hire AI mercenaries. Obviously as well as tackling the main objective and ancillary tasks you also have the opposing team to worry about, each player packing wildly varied attributes and abilities. The end result is, needless to say, absolute bloody chaos.

The choice of a first-person perspective only exacerbates the mayhem. A traditional MOBA provides a strategic bird’s-eye view, whereas the likes of SMITE balance an action feel with a generous field of view by displaying in third-person. Being locked into your character’s POV can be handy for those wielding guns and other ranged weapons, but things get dicey for the many melee heroes on offer. The loss of peripheral vision is disarming. When several players from each team clash together into one large skirmish, with minions entering the fray and turrets firing on from above, the result is incomprehensible calamity. Fight up close brandishing a sword and the only indication that your attacks are connecting may be the flashing crosshair indicator. 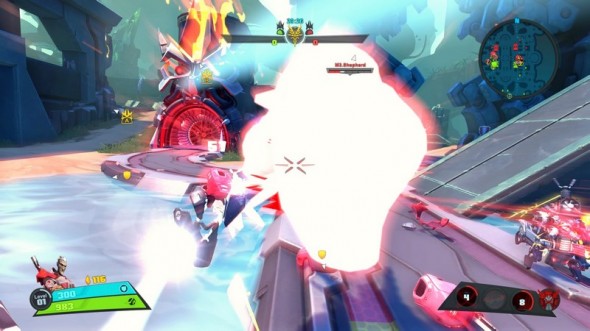 Yup, I’m doing something, I think!

In-game may be pandemonium but even the metagame is cluttered and confusing. Overwatch keeps things simple, with only cosmetic loot to worry about. Battleborn has a range of stat-boosting gear acquired through campaign drops and loot packs which can be equipped in various loadouts. There’s an overall Command rank but every character comes with a separate rank to increase, along with a lore and rank mastery percentage to max out, mutation unlocks providing alternative perks, and different taunts and skins to earn.

A hefty number of gameplay challenges can be worked towards for numerous titles, bonuses and even in order to unlock characters – not all heroes are immediately playable. The breadth of tracked character and player stats borders on obscenity. There’s just so much extra stuff. All of these elements of progression no doubt offer additional hooks in themselves, but there’s something to be said for the simplicity and even playing field afforded by cosmetic-only personalisation.

It may come as no surprise to hear that this everything-and-the-kitchen-sink mentality follows through to the character roster itself. From a penguin in a giant mech and a guy with a mushroom for a head to an aristocratic steampunk robot and a literal Gundam, every sphere of influence imaginable throughout fiction and pop culture has been brought together into one wild melting pot. 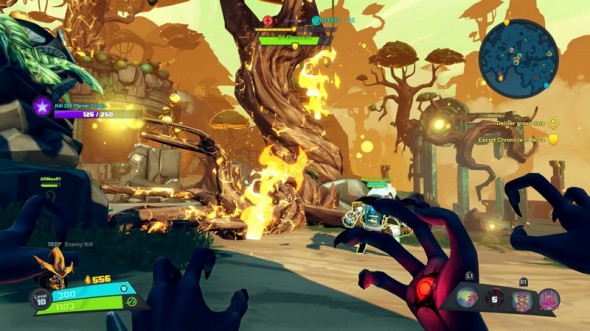 Likewise, Battleborn’s overall visual identity is completely undecipherable. There’s a substantial injection of sci-fi throughout but some of the hero design and Summoner’s Rift-style level environments harken back to more traditional high fantasy. A strong comic aesthetic with angular modelling and caricature-like proportions give a small nod to Borderlands. It even throws in a few anime cutscenes for good measure, because why the hell not. Ultimately, Battleborn is garishly bright and bold, a disgorging of intense colour and incongruous style. The result is utterly and unapologetically disharmonious. I actually kinda like it.

If the message hasn’t been clear enough already, to directly compare Overwatch and Battleborn is a fool’s errand at best. A crucial disparity is that Overwatch is a multiplayer first-person shooter  first and foremost. Battleborn is actually a lot more than that. I don’t think even Battleborn itself knows what it wants to be. Quite frankly, it’s ridiculous and a bit of a mess. But that’s part of its charm.

If Overwatch is the Michelin-starred plate of nouvelle cuisine, Battleborn is an all-you-can-eat buffet: vast and convoluted, inconsistent in theme and quality, but still remarkably satisfying when you’re in the mood for it.

To date, I’ve thoroughly enjoyed my time spent with both Overwatch and Battleborn for entirely different reasons. Which should you buy? Both, actually. Especially considering the latter’s hefty discounts in light of its disappointing sales figures.

Hold it right there, though. A game of this ilk lives and dies by its community. At the time of writing there are still enough players in matchmaking to easily find a co-op mission or competitive match – on the PlayStation 4, at least. I worry how long this will be the case for, however, which is my one major reservation in telling you to get on-board. It sounds drastic, but as player numbers dwindle Battleborn would massively benefit from being granted through PlayStation Plus and Games for Gold, or even switching to a free-to-play model. To otherwise fizzle out as a victim of circumstance would be a real pity.