Many people are quick to put Call of Duty and Battlefield together in the same bracket. Yes, they both come out each and every year and yes, they both primarily are about shooting people in the face. Though what’s always set the Battlefield games apart is their huge scale, bombastic action and vehicle-based combat. I say combat, but what’s really going on is nothing short of mayhem.

With Battlefield 4 signifying EA’s seeming desire to annualise the series, this does cause concern that instead of fully-fledged sequels we’ll instead end up with yearly updates. Luckily, Battlefield 4 introduces new features as well as re-introducing some old fan favourites that make this title stand on its own feet.

The first thing to be aware of is the huge difference between current-gen and next-gen versions of this game. I played Battlefield 4 on the PS3, though have been lucky enough to see it running on a PS4. There is a world of difference.

The PS3 suffers from a frame rate which is half of the PS4’s, and every other graphical setting takes a hit. Whilst this is to be expected, it does leave the current-gen version looking particularly ropey, especially when you look off into the horizon to see that the game’s draw distance doesn’t cope well with the large maps. 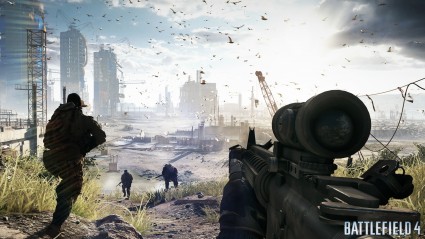 This looks pretty. Clearly not taken from the PS3 version then…

Still, some poor visuals aren’t going to get in the way of most people’s enjoyment of this game, in particular the multiplayer component. You probably know the standard Battlefield routine by now. Two teams need to fight for control of several locations on a huge map. The more locations you have under your control, the quicker the enemy team’s point score drains. The first team to have their points tick down to zero, loses.

That’s the basics, but the reality is that these huge maps allow for up to 24 players (on the PS3) to play at the same time, meaning each battle gets extremely hectic. Unlike previous Battlefield games, where maps could be too large and feel somewhat empty, Battlefield 4’s maps seem to strike a great balance between expansive open ranges and confined spaces.

Don’t get too comfy with how the levels start out though, because making a welcome return is properly destructible environments. Battlefield 3’s maps contained buildings and objects that would break apart in a particularly scripted manner, meaning you couldn’t blow a hole into any old wall you wished. Battlefield 4, however, has turned destruction up to 11.

Whilst it may sound like blowing up buildings is just for fun, changing the landscape you play in can provide a tactical advantage. One particular map contained a building where snipers would constantly hide in and take shots from. I naturally grabbed a tank and blew giant chunks out of the building, taking out the snipers and their cover in one go.

This ability to re-shape the map coincides with the huge number of items available to you to re-spec your characters. The four main classes all have their caveats and special abilities, but you can pick and choose a primary and secondary weapon for each of the four loadouts (Recon, Engineer, Assault and Support). 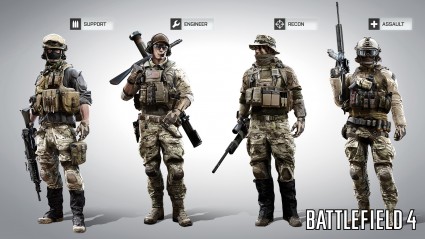 It’s nice to be able to slowly make your way up each role’s unlock ladder, gaining access to new guns and gadgets, but one aspect that takes the wind out of the game’s customisation sails is the idea of ‘Battlepacks’.

These Battlepacks are dished out as you reach particular level milestones. Each Battlepack contains a random assortment of new abilities and extras to clip onto your weapons. Paint jobs, rifle attachments, scopes and so on.

The problem is, with the items being randomly dished out, you’ll get gear that you can’t use or simply won’t use. It puts the brakes on any plans you have of creating your perfect loadout. What makes the whole idea even more gross is the fact that EA will allow you to buy these Battlepacks as well as earn them. How very generous of them. 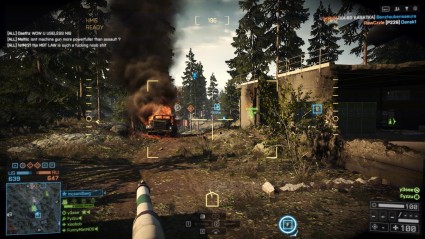 IAP’s make me want to blow up tanks. Which is handy.

It hurts even more when you consider the fact that the game divides its player base by those that are ‘Premium’, those that will buy the DLC and now there’s another subsection of players that are buying these Battlepacks. It all feels like being at school and having to keep up with the rich kids when comparing football stickers.

Having said all of this, the allure to keep on playing, to keep on levelling up and to keep unlocking is as strong as ever. This is thanks to the fact that nearly anything you do will result in experience being earned. As someone that isn’t very good at shooting people, it’s extremely rewarding to rise through the ranks all thanks to your ability to capture flags, have your team-mate spawn at your position or because you’re good at spotting enemies.

It goes a long way to say that one of my best games involved me simply finding a high building, setting up shop and spotting a whole lot of enemies that insisted trying to flank my team from a wooded area. Each time I spotted an enemy, a triangle appeared above their head which everyone on my team could see. Whenever one of my teammates shot these triangle-sporting soldiers, I got a point bonus. It doesn’t sound like it should have been fun, but I honestly felt like I was being a true team player at that point. I’m infinitely more useful at pointing at people and saying ‘there they are’ than I am at shooting them.

Battlefield, as a series, has always been a shooter that’s friendly to people that can’t shoot. Where Call of Duty will punish you and your team repeatedly for every death, Battlefield won’t. Well, not as strongly at least. That’s not to say that the cat-like reflexes you see Call of Duty players exhibiting won’t be useful, but it’s all down to how you play the game. Want to be a spotter, a medic or someone that drives people all over the map? As long as you’re good at what you do, you’ll be welcomed by your squad and feel like you’re making a difference to the match’s outcome. 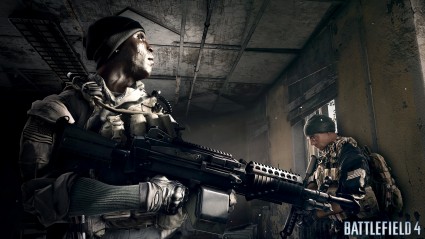 This is a person from the game’s story. I can’t remember story man’s name, which tells you a lot about the story itself.

One suggestion on how to play would be: ‘with friends’. No other game produces such a huge number of ‘did you see that?’ moments and being able to share these with your friends is a huge selling point. You only need to do a cursory look at the results thrown up when you Google ‘Battlefield 4 Gifs’ to see that this is a game that spits out amazing moments on a regular basis.

What utterly fails to provide ‘wow’ moments, or even moments that are memorable at all, is the story. Starting off with a somewhat humorous and bombastic opening, Battlefield 4’s single-player campaign treads old ground more often than a monk. Assuming that said monk goes to an old church and not a shiny new one.

What I’m trying to say is that the story isn’t engaging; it’s cliched and it’s not even exciting with it.

Characters are introduced and killed, the world’s in danger and chain-of-command gets challenged. Russians, Chinese and Americans. This would all be forgiven if the campaign contained some outstanding set-pieces, but nothing experienced in the poorly-checkpointed, 6 hour (at most) campaign came close to the fun to be had online.

Playing the ‘field
In the end, it’s always going to be Battlefield’s multiplayer that makes it a must-buy. This year, more than ever, the series is showing its age on current-gen consoles. Having only seen the PS4 version and not having had any real hands-on time, I can still safely say that PS4 is, unsurprisingly, the better choice. Should you have one. Or an Xbox One, of course.

Still, despite the creaking engine (or maybe it’s the consoles creaking?) and the improvements and changes being a little too subtle, this still remains the multiplayer shooter of choice in my eyes. Matches are more involving, frantic and memorable than anything seen in Call of Duty, and the range of ways you can participate in each battle keeps the whole thing engaging.

This gets a strongly recommended ‘Buy It’. As long as you’ve got an internet connection and the slightest interest in seeing explosions, Battlefield 4 will deliver.